There are some folk in Burton on Trent who are looking forward to global warming as it will bring the distant seaside closer! Whether you believe in a man-made cause of climate change or put it down to sun spots, El Niño or cyclical changes, there is no denying that the last five years – from 2014 to 2018 – were the warmest years ever recorded in the 139 years that the US National Oceanic and Atmospheric Administration (NOAA) has tracked global heat.

In the UK, eleven of the hottest years on record have occurred since 2002 and all of the country’s coldest took place before 1963. So invest in ice cream manufacturers and sun cream makers but do not forget English wines. With a climate, particularly in the South, mimicking that of the Champagne region of France a few years ago, English products are gaining prominence in the wine world. 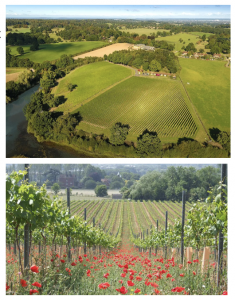 Top: The seven acre vineyard at Windsor Great Park. Below Chapeldown is England’s largest at 950 acres

The idea persists that the Romans practiced viticulture on these shores but Dr Tim Unwin suggests that any remains found were probably ex-pats planting a few vines to remind them of home and no large scale production occurred north of Paris and the Mosel. Tacitus does not have kind things to say about the British climate writing in the first century AD. The 1086 Domesday Book does record 45 vineyards but they could have been recent plantings by the conquering Normans. Despite popularising the wines of Bordeaux from the time of Henry II, Britain steadfastly remained a country of ale drinkers.

When French wines were not available in times of war, forays into Portugal provided supplies for those who could afford to buy wine. The English even led the way setting up the sherry style in Southern Spain. There were English vineyards in the 1960s but using German varieties of Riesling style grapes suited to cooler temperatures and making Liebfraumilch like still products. These were largely deemed a curiosity by the wine literati.

Fast forward to today and global warming when English wines are winning international awards. A grand total of 138 at the 2019 Decanter World Wine Awards. These are mainly for sparkling wines with over two thirds of production in that category. Kent is now only half a degree cooler than the Champagne region of Northern France and the underlying geology is exactly the same, separated only by incursion of the English Channel. The proximity to the sea means the climate is temperate, which gives it good protection from frost. However any amount of frost fans, frost blasters and a plethora of lit candles placed beneath vines failed to save them from sharp unseasonal frosts early in 2017.

Drinking fashions have favoured the English, with wine buffs eschewing higher alcohol and heavier flavours of Chardonnays and Shiraz. Oak has fallen out of favour as well. The quest for provenance and a connection with the winemaker and his vineyard helps as does modern equipment since few producers were established more than twenty odd years ago. So good climate, the right soil and modern kit has ensured success. 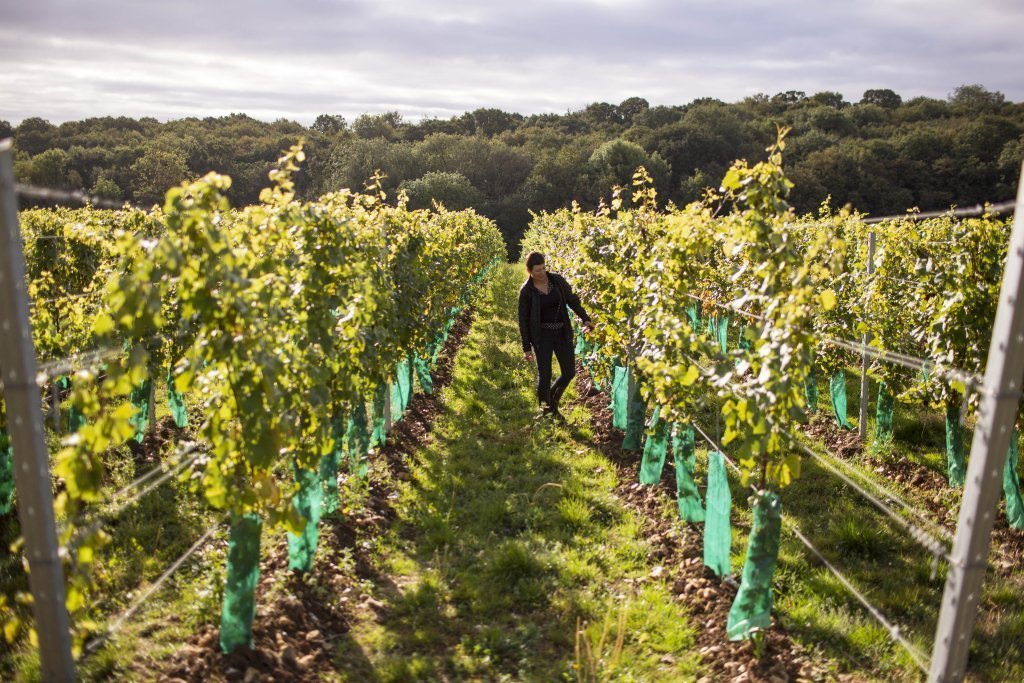 Lead picture and above: The vines at Taittinger’s Domaine Evremond at Chilham in Kent Photo courtesy of Thomas Alexander Photography

Corinne Seely at Exton Park on the chalky South Downs not far north of Southampton is French and looks after 55 acres of vines. Taittinger, the famous Champagne house with France’s second largest acreage under champagne grapes has invested in Stone Stile Farm near Chilham in Kent and plans to plant 100 acres of Chardonnay, Pinot Noir and Pinot Meunier grapes to produce English sparkling wine. It has renamed the place Domaine Evromond after Charles de Saint Evremond who promoted the wines of Champagne in England at the time of Charles II. Enterprising Taittinger has had a vineyard in California since 1987. With 68 chalky and south facing acres planted since 2017, they are expecting the first full vintage this autumn and intend to ramp up production to 300,000 bottles by the mid twenties. Vraken-Pommery has a collaboration with Hattingley Valley near Alresford in Hampshire while it too looks for suitable land north of the Channel. Californian giant Jackson Family Wines is also said to be on the look out for English real estate.

South of La Manche, the current climate is giving Champagne growers a bit of a headache, they are forecasting reduced harvests in coming years. Already, they are picking grapes two weeks earlier than they were 20 years ago in an attempt to retain the freshness and acidity that warmer weather reduces. England has a longer growing season which means that British producers can leave the grapes on the vines longer, bringing the grapes to ripeness while maintaining the essential acidity thanks to the cooler evenings. 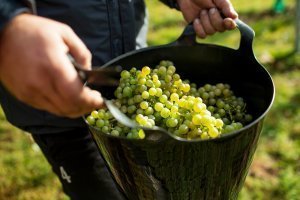 But the French are striking back. Bollinger is exploring options to retain the acidity which has been diminishing over the past 30 years. They are looking at historic grapes of the region. Not so long ago there were seven in regular use but that has reduced to just three. The others are Pinot Gris (called Fromenteau in Champagne), Pinot Blanc (aka Blanc Vrai), Arbane and Petit Meslier. These latter two have high levels of natural acidity as they mature more slowly and are less susceptible to losses during August heat waves. Château de Bligny and Champagne Drappier already have blends in the market showcasing these forgotten varieties.

So back in England, gone are the German varieties which suited a cooler climate and the Chardonnay, Pinot Noir and Pinot Meunier of today are classic French grapes which have only been planted in England since the early 1990s. So add the right kind of grapes which can be picked a little earlier with adequate acidity as sparkling wine does not need a fully ripened fruit. English producers are adamant that they are not trying to produce champagne, the product can stand on its own with many folk appreciating the clean nose and well-balanced acidity.

Next time we shall look at the size of the English sparkling wine industry and wonder whether it might surpass French production, in reputation if not in volume.