Beer is 96% water and breweries use a lot of water. They used to use a lot more in the days of washing wooden hogsheads. As well as the water which goes out in the beer, in the spent grains and evaporated up the copper stack during boiling, there is boiler feed, in place cleaning plant, rinsing mains and generally splashing about to hose away any beer or yeasty residues. We are told that in future wars will be fought over water and last year in Northern Mexico they nearly was one. 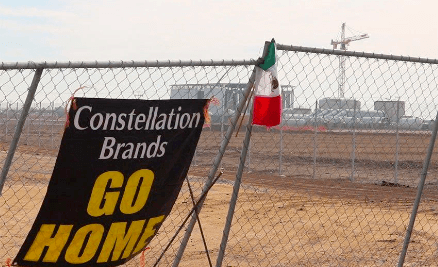 As part of the anti-trust settlement allowing Anheuser Busch and InBev to unite back in 2013, the rights to the US sales of Mexico’s Corona brand and the world’s largest brewery at Piedras Nigras near the Texas border which made it, were sold to US wine company Constellation Brands suddenly making it the world’s 12th largest brewer with annual sales of 30mhL. A second megaplant was planned further west but still on the US border at Mexicali in Baja California, this would start off at 10mhL with space to increase to 20 as Corona sales continued to climb. Farmers grumbled as the brewery would use the same Colorado River water and populist President Obrador stepped in with a local plebiscite just as the brewery was being completed. Turnout was 3.5% but 76% of them voted to refuse to allow the brewery to start production. Constellation upped and left moving all the plant to a riverside site in Veracruz Province in the south west but was left with a $700 million bill. Negotiations for compensation continue but there’s democracy for you!

A lot of treatises on brewing water regurgitate liquor analyses from Burton on Trent, Dublin, Munich, London and Plzen suggesting beer styles emerged in those locations because of the water. As towns grew in size, brewers would deploy whatever water source was readily available. Last year beer blogger Martyn Cornell discussed from where London brewers got their water citing the Bishop of Winchester granting the brewers of Southwark access to the River Thames back in 1509. Later the brewers near the City of London including Chiswell Street petitioned the City fathers to allow them to install a pipeline from the Dowgate Sluice to spare for drays going down to the foreshore at low tide and collecting water in casks. Remember the Thames was about 200m wider in those days and was constrained to its current width when the Embankments were built much later. The water collected in those early days could have been a bit salty but no one is suggesting that London invented Gose!!

Surely it was increasing technical knowhow which spawned these well known styles; pale ales and golden lagers from the kilning of malt with coke and Guinness becoming black after Mr Wheeler invented the drum roaster. Has anyone noticed that Guinness is no longer as black as it was? City beers would not need to travel far so that keeping qualities were not utmost in the minds of the brewers. It is likely that alabaster carvers from Burton on Trent took beer with them to work in London and it soon gained popularity. John of Gaunt’s wife’s tomb in the old St Pauls Cathedral (1368) being the most notable but sadly it did not survive the Great Fire in 1666. As tomb carving fell out of favour with the Reformation, the wagons kept rolling with Burton beers which was certainly on sale in London taverns in 1620.

Alabaster is a form of gypsum and where the deposits are more broken up, rainwater percolating through will dissolve calcium and sulphate ions giving high levels of permanent hardness down in the town. Beer is less prone to infection if the pH is lower particularly if the hop bitterness is high as well. The calcium ions present in the Burton valley wells will react with a range of phosphates in the malt liberating hydrogen ions and thus lowering the pH.

This scale was only articulated in 1909 but by observation the old guys realised that Burton beer could travel to Derby but Derby beer would not be of reliable quality in Burton only a dozen miles away. Burton brewers developed the town’s output in the 1700s and took advantage of artificial waterways to export to the Baltic and beyond to the States where Mr Bass shipped his first beer across in 1799. These beers were not crisp, pale and refreshing but classic dark robust Burton ales.

The 1866 Bass Water Tower by the River Trent from a 1905 post card. It is now all alone by the town’s library (right) but there are grandiose plans to turn it into a viewing platform – the only problem is that Molson Coors still use it!

So calcium reduces the mash pH and confers increased shelf life and a beer pH below 4.0pH while carbonate/bicarbonate will increase it as hydrogen ions are mopped up as carbonate reacts and is eventually given off as carbon dioxide. A process which can be encouraged by boiling the raw liquor. It is these two buffering systems that interact in the mash tun to dictate the finished beer pH.

It was reported in the Brewer & Distiller magazine in 2008 that, on a visit to the Freedom Brewery, based in the gypsum laden hills above Burton, the correspondent found them mashing lager with raw water containing 480ppm calcium and 1200ppm sulphate, a lot higher than that used by Marstons brewing traditional ales down in the town. The bicarbonate was not removed before mashing and with a total hardness of 1500ppm (as CaCO3) it is clear that the bicarbonate pH raising properties were a lot higher than the calcium reducing ones and that brewers would do well to remove bicarbonate if they do not have access to Needwood Plateau alabaster! The beer pH ended up around 4.4pH, not wildly different from Pilsner Urquell using the very soft water of Bohemia!

The small vessel is the lactic acid tank installed in a Ziemann brewhouse at Auckland, New Zealand in 1938

Yeast also needs a bit of calcium to allow effective flocculation after fermentation. The chemistry of water was being explored in the 1830s and in 1882 the term ‘burtonisation’ first appeared to describe the addition of calcium sulphate to mimic the waters at Burton. That was too late for some London brewers like Charrington, Truman and Mann Crossman which opened plants in the town so that they could brew pale ales. As late as the 1950s Bolton brewer Magee Marshall was hauling water northwards in converted railway loco tenders from a well in Burton. 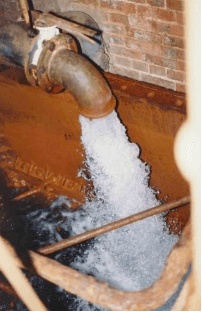 If calcium is lacking, the brewer must rely on alcohol, hop bitterness or cold and effective control of microorganisms to keep the beer wholesome over its shelf life. Modern lagers can only utilise the latter. The Reinheitsgebot in Germany forbids the addition of minerals so a lactic acid plant takes wort, grows up Lactobacilli for addition at the wort cooling stage thus lowering the pH. It is also possible to include sacrificial alloys on the feet of lauter tun rakes to leach minute amounts of trace metals like zinc into the wort. A cunning way around eh?

Water is a lot more complicated than its level of calcium and bicarbonate ions; next month we shall look at where brewers get it from and how they can use less of it.