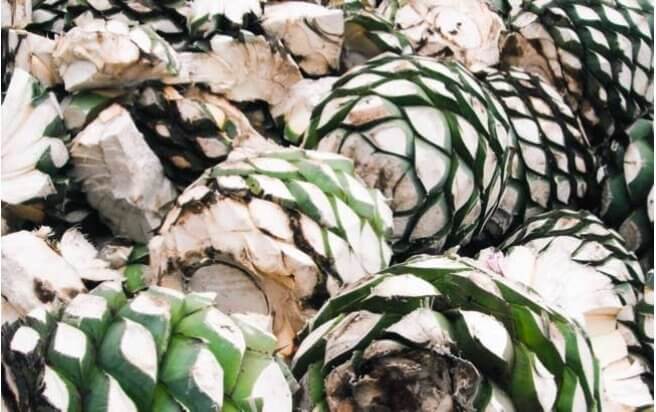 I’ll bet that few of you celebrated International Margarita Day at the end of February. The classic Margarita has but three ingredients; tequila, orange liqueur and lime juice but over the years bartenders seem to have developed it into a glorified slush puppy. Tequila itself gained an unhealthy reputation with many young people swearing ‘never again’ after an evening of slugging shots. Revival is in the air with some 538 mixologists worldwide entering a competition organised by Cointreau to find the best non classic margarita while the base tequila is moving from slamming to sipping with almost as many cask expressions as Scotch.

Tequila is unusual as elsewhere in the spirit world, it is specific production processes that transform raw carbohydrate materials into the end product; in tequila its uniqueness comes from the raw material itself.

Celebrities have joined the fray. George Clooney bought in to Casamigos and later sold on to Diageo for a billion dollars; then there was Dwayne ‘Rock’ Johnson with Teremana and lately Kendall Jenner’s with 818 Tequila which is currently in dispute with Texan based brand 512 citing label similarities rather than a clash of telephone area codes. In January Mark Wahlberg took a stake in Flecha Azul.

The Tequila Matchmaker app lists 2025 brands from 132 currently working distilleries with the global giants pushing it on to the bartenders’ shelves. Market researchers IMARC reckon the global market is worth some $13 bn and that is expected to double in the next five years. Top seller is Diageo’s Don Julio followed by Carlos Camarena’s Ocho and Bacardi’s Patron.

The big players in the global market

So tequila based drinks are on the up. The States which seems to be in love with all things Mexican at the moment has seen sales in the last decade double to 22.2m cases, and last year volumes rose by a further 5%, with value up by 16.1%, according to Nielsen IQ. Premiumisation is in the air and tequila is now into third place in the US spirit world behind whisky and vodka. What happens over there is often a harbinger of what happens in Britain where tequila accounts for only 0.5% of the market so perhaps we should look at this next big thing.

The maguey or agave god Mayahuel and making pulque

Tequila belongs to a class of distilled spirits called mezcals which use the agave or maguey ‘piña’ as the carbohydrate source. The undistilled drink is called pulque but that is largely confined to village producers in Mexico. As elsewhere in the ancient world, pulque was prominent in the rites and rituals of pre Columbian Mexicans and it even had its own god Mayahuel, who is said to have given birth to an entourage of 400 rabbits, each representing the many stages of inebriation – I think I would prefer the ‘whirlipits’ rather than a visitation of rabbits!

Early Mexicans knew nothing of distillation and the first reference is in 1758 when a Don José Cuervo was granted land to grow agaves and his son was distilling by 1795. Today Mexico tightly controls the production of tequila which can only be made from the blue agave (Agave tequilana weber var azul) and must be produced in Jalisco province where the town of Tequila is situated or in specific municipalities in other states. The Jalisco highlands yield sweet blue agaves, while those grown in the lowlands have a more herbal aroma and flavour. A wide palette for the blenders to work with.

Mezcal can be made from any old agave but still the areas are defined but mainly in the province of Oaxaca. This wide distribution means many microclimates with their terroir imparting flavours ranging from herbal and citrus, to spicy and floral.

Such appellations do present naming problems elsewhere in the world where agave will grow and distillers want to climb upon the bandwagon. The Australians for instance are selling ‘agave spirit’. 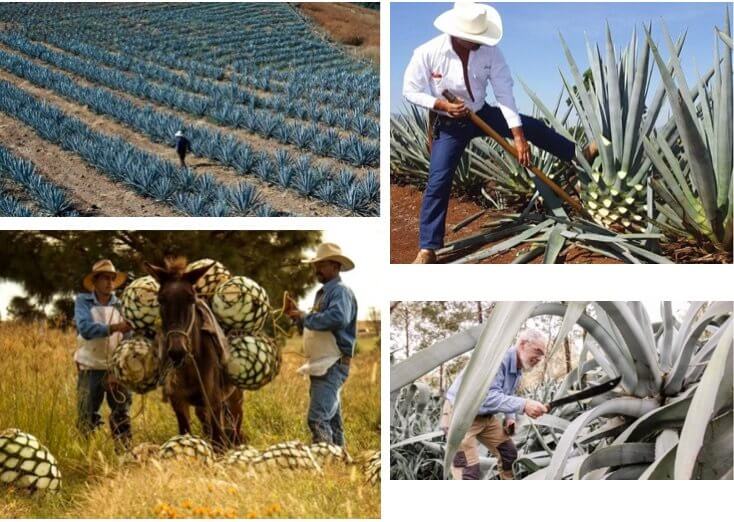 The agave or maguey plant is a drought tolerant succulent which thrives in hot arid conditions. Some 200 types are known and some 40 are used to make alcohol.  For every litre of tequila at 100% agave between 5 and 7 kg of agave heart or pinas is needed. Perhaps getting on for a million tons of agave are required and they must all come from specifically defined areas. Prices will inevitably fluctuate with great care and careful planning being needed to assure regular supplies from the fields. All the time the method of propagation makes a monoculture susceptible to disease.

Some varieties take 25 years to mature and flower just once before the plant dies. The flower stalk which can be 15 feet tall and is highly prized for its sweet sap like sugar cane. To save depletion of the carbohydrate in the pina, the agave is harvested just as the stalk appears. The leaves produce shoots or ‘pups’ which are transplanted to grow more agaves. 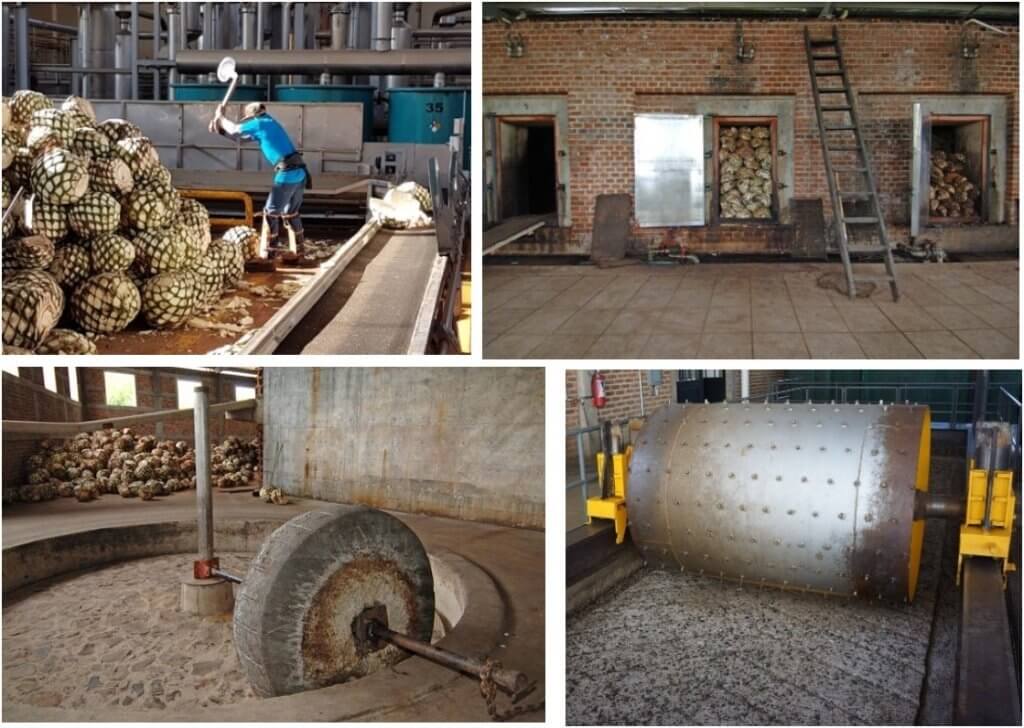 The pinas are chopped in half and cooked in ovens. The pulp is squeezed and sparged either using traditional stone tahonas or else under heavy steel rollers

Commercial plantings will mature after 6 – 8 years and the entire plant is trimmed back to leave ‘la pina’. This is the rock hard core of the agave and a store of fructans. It looks like a pine cone or even a pineapple and can weigh between 40 and 90 kilograms. Harvesting is a demanding job for a gang of six jimadores who can fill a 20 ton truck in four hours. That works out at around 150 pinas each per day. These pina are traditionally slowcooked in a pit over coals for several days to convert the innards into a syrupy mass. This trad process imparts a smokiness sought after in some brands of mezcals. Today ovens at 95oC for 36 hours are used and in some cases pressure cookers. Originally the cooked pinas were crushed in mule driven mills to separate the liquid and sparged to recover all the residual sugars which are added to the syrup exuding from the ovens. Today more hygienic mills are employed. The fibrous residue would formerly have been used for making ropes, bags and even clothes and bricks for building, these days it is most likely burnt to fuel the process. If you want to avoid all this processing and do not have agave plants nearby you can buy a rich, viscous, dark, and slightly smoky agave syrup from Mexico.

During the 1970s, the Mexican authorities did allow the addition of other sugar sources to help increase output. It is used to make what is called mixto tequila as long as agave extract is over 51% of the feed. Hence the importance of the term ‘100% agave’ on the label. Perhaps strangely to be called mezcal, 100% agave must be used.

The agave juice can be fermented in wooden vessels or more usually in stainless. On the right are stills at Patron

The extracted juice passes to an ambient fermentation with the larger commercial brands using a cultured yeast addition. Traditionalists rely on wild yeasts. After three days fermenting the 6%ABV wash is distilled, usually in a two stage process.

New make unaged tequila is called blanco although the term ‘silver’ is creeping in. Gold may have spent a bit of time in a barrel but more often caramel has been added. The other terms indicate varying periods in a barrel, reposado for at least two months and añejo for at least a year. Extra añejo will be at least three years old but aficionados say that tequila is a delicate spirit and woody flavours dominate if too long is spent in cask. They say that Tres Generaciones, the oldest at eight years is a fine spirit but you cannot taste the agave!

Two extra anejos, the label of Kah glows in the dark. On the right is Pernod Ricard’s Olmeca with Aztec imagery

As Tequila and mezcal pave the way, could we soon see the likes of raicilla and bacanora behind the bar? These are made from wild agaves and the former has almonds or pine nuts added to give it a more peppery flavour. Sotol was once classed as a mezcal until the botanists decided the raw material was not an agave but it is produced in exactly the same way.

Bring On The Barrels… Part 3

HOW ARE NEW BREWERS PRODUCING FUNKY BEERS? BrewDog in Scotland is one place where the workings of Brett with a light souring from lacto and pedio is trying to be better understood. Brewmaster Richard Kilcullen from the USA has his own £4m Overworks where he says that wood, fruit and bugs work in harmony. It […] 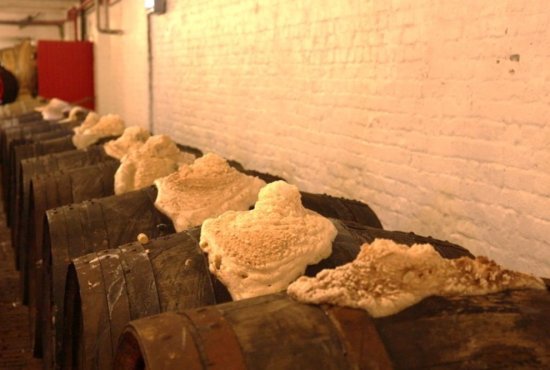