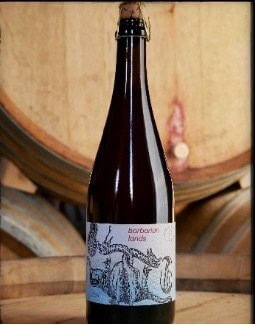 Beer drinkers are getting more adventurous and seem willing to sample, often at considerable cost, beers with wild, funky and sour flavours, often derived from the inside of a wooden cask. Funky encompasses hay, farmyard and horse blanket flavours, not a good description for townies who do not own a horse but you will know when you smell it! Acid means a gentle lactic twang not a mouth puckering dose of vinegar where some brewers have not yet got the moderation message. The States led the way for years and most micro breweries seemed to have a few bourbon casks lying around with an imperial stout composting inside. The Brits are catching up. 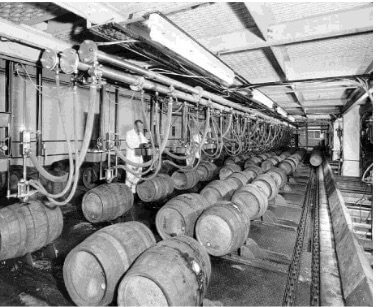 Brewers have a long association with wood. Brewing vessels would have been wooden. A wooden paddle would have mixed the mash. A wooden ladle would be used to move the wort from the top surface of the mash. Even our ancestors would not have tried a direct flame under a wooden copper but would have heated stones in the fire and dropped them in. Australian micro Stone and Wood (now part of Japan’s Lion) named itself after the technique and produced a modern version; apparently the stones encrusted with caramelised wort sugars were then placed in the fermenters to yield added flavour notes. The style is occasionally brewed in Germany under the name Steinbier. 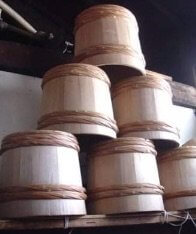 In the brewhouse, metal took over but fermenters were wooden and porter maturation vessels got larger and larger. Breweries held dining events for invited worthies inside them but the race for bigger and bigger eased off in 1814 when a 3500 barrel vessel, filled to within a few inches off the top of its 22 foot height, ruptured at the Meux Horse Shoe Brewery in London and eight people died in the deluge. The brewery got the excise duty back but the victims families got nothing. Pitch lined concrete vessels took over but casks continued to be used in the pub trade as the ‘barrel’ shape made them easy to handle and set up for dispense. 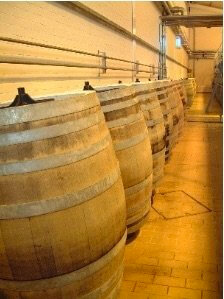 We know there were wooden containers secured with rope hoops depicted in tombs of the Pharaohs but we have to wait for Pliny to write that the Gauls kept their beverages in wooden casks. It seems they had more of a military use back then as Julius Caeser is said to have catapulted casks of burning tar or rotting entrails and even beehives at the Gauls who responded, according to Markus Fohr in a recent Brauwelt article, by rolling similar weapons down the hill into the legionnaires!

Wood and particularly oak had to have a tight grain to prevent leakage of the liquid and with battleships to build (HMS Victory took around 6000 mature oaks to construct back in 1765) brewers looked to the Baltic and eastwards for supplies, beer going one way and cask timber and iron coming back. Memel oak from what is now Lithuania was the gold standard and is still highly prized by the coopers who keep Marstons Union sets going.

Wooden casks do harbour bacteria and being self insulating are difficult to sterilise before refilling. Classically casks were washed and then filled with boiling water and left for an hour or so. An expensive use of energy and water. Wooden casks could be lined with pitch or else a synthetic paint material called Dukeron made by the Vanguard Chemical Company of Leeds which was taken over by Albert John Murphy in 1909. Murphys of course still trades in the industry today. 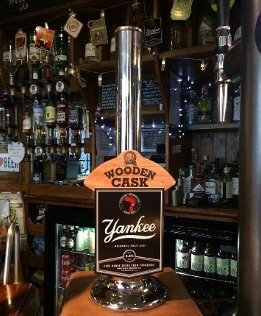 Stainless steel inners appeared which allowed cheaper timber to be used and by the 1950s all-metal casks were becoming common as were the bonfires of the old wooden ones. Metal casks were epoxy lined aluminium alloy but the linings did get damaged and with a tenuous link between aluminium and Alzheimer’s, they have been replaced by stainless. An added bonus of the change was that the value of stolen casks did drop considerably as did the ease of smelting the contraband but theft remains an industry problem to be tackled 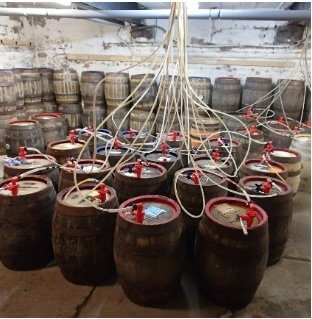 The cellar at the SPBW Woodfest at Castleford in 2017

So the wooden cask has long gone but a few brewers still supply them, definitely Sam Smiths, Hook Norton and Theakstons but possibly St Austell and Wadworth as well. Rooster did offer its Yankee in wood and it said so on the pump clip. The Society for the Preservation of Beer from the Wood was founded in 1963 when there was still a lot of wood about. Accepting the inevitable they now have broadly the same aims as CAMRA and seem to have a lot of social activities at its 20 odd branches. It has a list of 60 odd brewers who occasionally supply wooden casks to the trade and certainly to its biannual Woodfest celebrations.

Coopers at work at Wadworth, St Austell, J W Lees and Theaksons not so long ago. Alastair Simm on the left is now at Jensen’s Cooperage in Ripon and is repairing most of the country’s wooden casks

The ubiquitous brewery cooper is no more and much maintenance is contracted out to Alistair Simm’s Jensen’s cooperage at Ripon. Today wooden casks are usually stillaged behind the bar to advertise their specialist presence but that leads to cooling challenges. Hogs Back has a wooden cask in the shop for growler sales and has some customers who swear that they can tell the difference.

I just wonder whether there is a bit of auto suggestion going on here. Would a trained flavour profile panel pick up any difference unless the wooden sample was infected of course! After all, the beer is only in the container for days compared to the ten years or more for a maturing malt whisky. Whisky makers toast their casks before filling using terms like No1 to No4 alligator describing increasing levels of charring which resembles the back of the amphibian. The charred oak surface reacts with the spirit in a combination of leaching, absorption, gas exchange and chemical reactions which enhance the flavour of the whisky. It is said that 30% of the finished scotch flavour is derived from the wood. The trouble with beer is that it is not in there long enough. 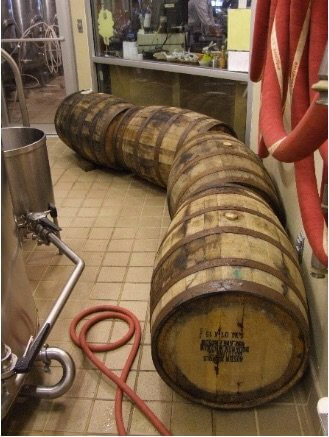 The US craft brewers were first. These casks are at Cally’s in Harrisonburg, Virginia back in 2007

Perhaps after four fillings, a whisky cask loses its ability to mature spirit. Rejuvenation is possible but the process reduces the thickness of the timber and weakens the cask so brewers can pick up a used cask for perhaps £150. In the good old days there would be whisky left inside. Today the wily distillers will rinse and even pressure treat casks after emptying to scavenge remaining residues. The excise got wise to this as well and only allow 0.1% ABV pick up from the residual spirit before the hapless brewer has to pay spirit duty rates on the whole cask. So if you want a touch of wood and a bit of whisky flavour it is best to empty the cask and have a few drams before filling! The now defunct Highgate Brewery in Walsall mashed a beer called Breacais (after the village of Breakish on the Isle of Skye) with distillers malt. The 4.6%ABV beer had a half bottle of Long John scotch added to each firkin. That was in the days when you only paid for the uplift in %ABV at beer rates!

Back in 2001, distillers William Grant approached Caledonian Brewery in Edinburgh to brew a strong ale to season whisky casks before filling. Dougal Sharp a brewer at Caley at the time tasted the beer after the seasoning process and found it to be “complex, deep, smooth and rich with flavours of toffee, vanilla, honey and spice with a subtly warming finish and definitely moreish’. He founded Innis & Gunn to follow up the idea. The process was streamlined with an in-line ‘oakerator’ chock full of toasted oak chips. Today Sharp is now about to build Edinburgh’s first major new brewery for 150 years to brew 400,000hL a year. On a smaller scale Windsor and Eton use oak chips in its Guardsman but cautions that you should sterilise them before use.

So you can get woody and mild whisky flavours but that is not the funk or the acid which artisan brewers are peddling today. Where that comes from we shall tell you next time…..

Another early US experimenter in cask aging, Cambridge Brewing in Massachusetts. Filling wooden casks at Wadworth and the funk begins at the Crossover Blendery in Hertfordshire

Last month we considered the importance in brewing of the calcium and bicarbonate ion, of course there are other ions of significance in the water. Sulphate promotes crispness and accentuates hop bitterness but it can be overdone leading to sulphidic notes as in the famous ‘Burton snatch’. Chloride on the other hand provides fullness, so […] 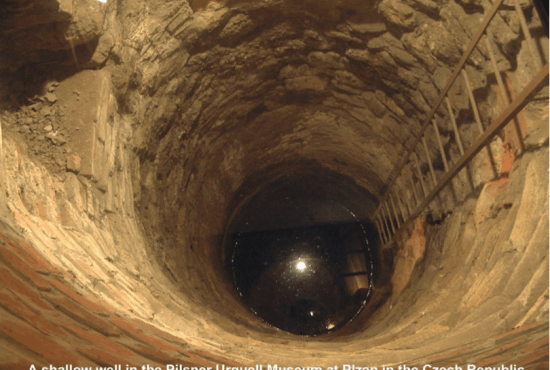 Beer is 96% water and breweries use a lot of water. They used to use a lot more in the days of washing wooden hogsheads. As well as the water which goes out in the beer, in the spent grains and evaporated up the copper stack during boiling, there is boiler feed, in place cleaning […]