WELCOME TO THE WORLD OF FUNK AND ACID

Welcome to the world of beer ageing…often in a cask, but not always. There are only a few microorganisms involved; Brettanomyces aka the British fungus is slow to take off but will eventually consume most organic compounds leading to earthy and mushroomy flavours redolent of the farm yard. Acidity needs to be constrained and be lactic rather than acetic to be acceptable in the marketplace. pH levels are rarely below 3.3 but more often 3.6 or above, only a subtle acidity is needed. 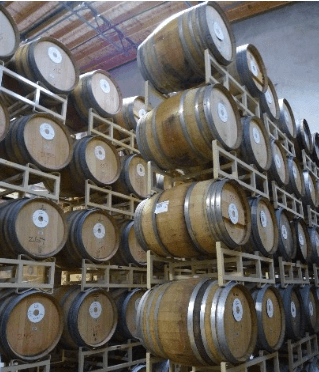 Stacks of bourbon barrels at Deschutes Brewery in Bend, Oregon maturing its Abyss or Dissident.

A rough style definition has emerged where ‘wild’ beers show the characteristics of a Brettanomyces secondary fermentation while ‘sour’ comes from acid producing bacteria, usually Lactobacillus but sometimes Pediococcus. Having said that if a beer has both fermentation agents it can be called either wild or sour! Either way the term often used for these micro-organisms is ‘critters’.

Aging of strong beers, usually darker imperial stouts, was made popular in the US by Goose Island with its Bourbon County and Russian River with Supplication who pioneered the technique and since then many US brewers have followed. Brewers quickly learned that a cask recently holding whisky will be sterile so will need conditioning with an inoculation of Brettanomyces and perhaps lactic acid bacteria if you want an aged character and not just wood and whisky. Brett as it is known in the trade is tricky to propagate in the laboratory.

DID IT START WITH BELGIAN LAMBICS? 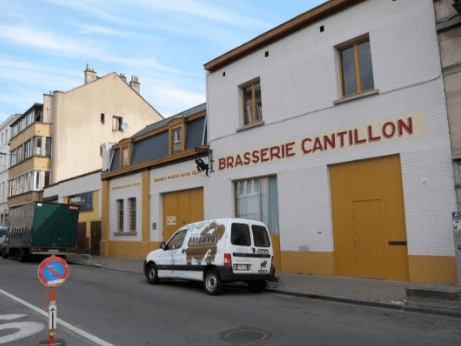 The Cantillon Brewery in the back streets of Anderlecht in Brussels.

Experimentation is very active amongst the microbrewing fraternity worldwide often introducing yeast from the local environment and matching them to foraged fruits and plants from the hedgerow. These beers are complex and ‘interesting’. We are much more at ease with funky and acid flavours today. We are even happy to drink hazy beer if it is meant to be hazy. We are more used to slight acid flavours as we drink more wine; cider makers have blended in fruit to attenuate acid flavours and generally we are more adventurous and willing to try anything, at least once, instead of our pint of the ‘usual’. The inspiration to all this has perhaps been the Belgian brewing heritage of lambics, oud bruins and Flanders reds.

Surprisingly lambic is not the primordial beer style which has survived unchanged since Mesopotamian days. It is first mentioned in the early 1700s so the roistering peasants of Breugel’s paintings were high on white beer, probably a brew called keute, but certainly not lambic. We can only surmise why spontaneous fermentation was reintroduced as brewers had long learned that the residues from one fermentation would start the next far more rapidly rather than leaving it to nature. 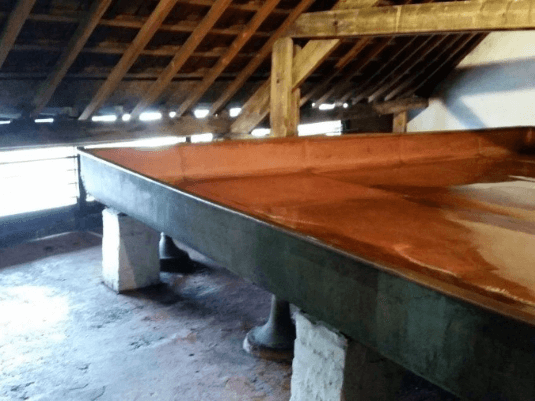 The coolship at the Cantillon Brewery in Brussels.

Lambic is certainly a unique beer, the grist is around 35% unmalted wheat, the hops are traditionally aged giving little bitterness but cheesy and stale notes while still providing preservative and antioxidant properties. Bitterness is not wanted as with sour notes it is not a happy combination. No yeast is added but the wort is collected in a shallow coolship high up in the brewery tower and allowed to cool naturally with the microorganisms of the Senne Valley west of Brussels wafting in through open louvres. Some brewers have slow speed fans fitted to waft the air around more. The ‘infected’ wort is put into cask for fermentation and maturation. Several years aging in oak casks which originally held wine, particularly red confers a complexity of flavour unknown in other beers. 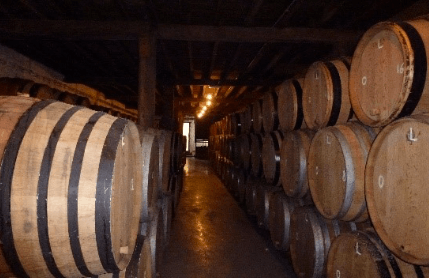 Cantillon is the archetypical lambic brewery dating from 1900 and being the only one left in Brussels itself. It is now a working museum and offers an excellent self-guided tour.

Lambic used to be served on draught while young but these days it is more likely to be sweetened and sold as ‘faro’ or else matured with pulped cherries to make kriek. This is the most popular fruit derivative as the traditionally rather sour Schaabeek cherries complemented the tartness of the lambic. A 12-18 month old lambic is infused with 20-30kg/hL of cherries. The fermentation resumes with help from the organisms on the skins of the fruit and the sugars are consumed in a process lasting 4 -9 months. Often a second batch of lambic will be added to the drained cherries for a second extraction before the two batches are added together. The cherry stones also add almondy marzipan notes to the finished product. 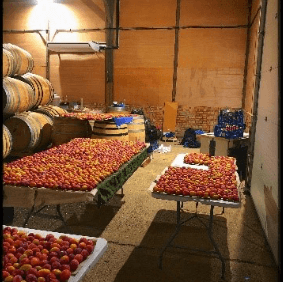 Fruit awaiting maceration and blending at the Crossover Blendery in Hertfordshire.

Other fruit beers will use raspberries, peaches, apricots, blackcurrants or even apples. The unscrupulous are known to add colour, fruit extracts and even aspartame! The finest examples of the unfruited lambic family will be gueuze, perhaps the most interesting and complex style of beer in the world. It is a bottle conditioned mixture of over three years old blended with younger beer to add active yeast and a source of nutrient.

Even lambic production is not isolated from the modern world; Cantillon at Anderlecht in Brussels itself has reported concern about climate change since there are fewer cold winter’s nights in Brussels these days. A cool night with low humidity seems to suit the organisms best and the season runs from October to April. The brewing season for lambic beer production has shortened by 25 days from 165 to around 140 days since the early 1900s and could put its production at risk as under PGI rules it is not allowed to be made anywhere else. 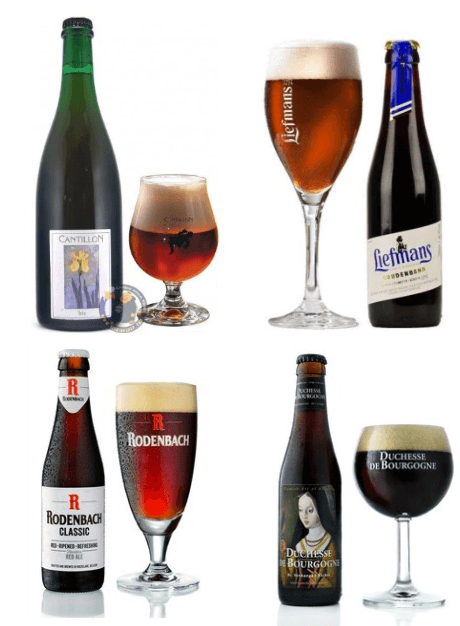 Some notable Belgian beers which have seen the inside of a wooden barrel.

A lambic fermentation is complex with Klebsiella and alongside with Pediococcus starting off then Kloekera will consume the glucose. Saccharomyces spp are active from the second month with continuing activity from lactic acid bacteria. After nine months, the bacterial activity is a lot lower leaving the Brettanomyces largely in command and able to substantially metabolise everything with the beer finishing ultra dry. Brettanomyces will form a pellicle on the beer surface which helps to keep oxygen out. This is of course a gross oversimplification and no two lambic casks even from the same brewery will have exactly the same flavour leading to a job for the blender as consistency is the key.

Another famous Belgian style has the Oud Bruins and Flanders Reds. These are not spontaneously fermented but often can spend a lot of time in wood. Flanders Reds come from west Flanders and Oud Bruins from the east. The eastern beers (Liefmans and tiny Cnudde) around Oudenaarde tend to be darker bruins and some writers call the western ones around Roeselare (Rodenbach and Verhaeghe) Flanders Reds due to a paler tawny colour.

The worts are inoculated into open fermenters with a mixture of S. cerevisiae, Lactobacillus and Pediococcus and fermented in steel tanks for 7 to 8 weeks to create a fruity, refreshingly tart beer. It then spends some 4-8 months in conditioning tanks to develop its aged character. 5%ABV Oud Bruin is then blended with newer beer to provide krausen and soften the overall flavour. The most famous is perhaps Liefmans Goudenband at 8%ABV, the cork carries the year of packaging while the label has the best before ten years later.

Wooden foudres at Timmerman’s in Belgium, New Belgium in Colorado and Boon back in Belgium.

Rodenbach, now part of the Netherlands Bavaria group is the archetypical West Flanders brewery. Top fermentation takes place with a mixed strain in conicals before four weeks in horizontal conditioners ahead of the foudres (or foeders depending where you live). Beer is aged for a minimum of two years in 294 oak foeders with capacities ranging from 160 – 650hL said to be the biggest concentration of wooden vessels in the world.

Peter Bouckaert until recently at New Belgium in Colorado spent ten years working at Rodenbach and his La Folie at 7% is probably the best Stateside example with Oude Tart at 7.7% from the Bruery running a close second. Sadly Goose Island’s Matilda is now a poor imitation of its former self since A-B took over. 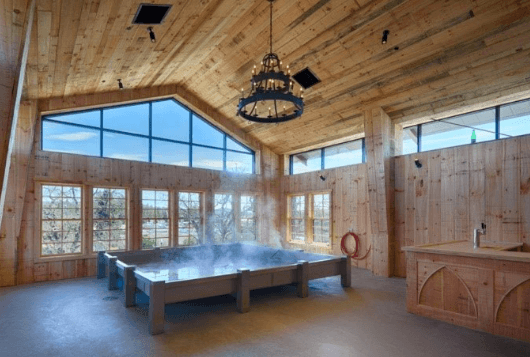 A brand new coolship installed at Russian River in California.

Brettanomyces, the ‘British fungus’ was first described in 1904 by Neils Claussen from the Carlsberg Laboratories. Emil Hansen had always been worried about the slow uptake of his pure yeast culture system in the UK. He suspected British conservatism but Horace Brown at Worthington in Burton on Trent had a culture plant but could not get secondary conditioning in cask to produce an acceptable match until it was realised that a non Saccharomyces species was active inside.

Brettanomyces is slow to grow particularly in the presence of competing brewing yeast strains but when it gets going it will eat anything! In lambic brewing it might take seven or eight months to start growing. It can grow on a range of nitrogen sources, it has glucosidase activity so will lop glucose off short chain dextrin molecules. If oxygen is available it will readily produce acetic acid. It can metabolise esters leading to high levels of ethyl acetate, ethyl lactate, ethyl caproate (pineapples) and ethyl caprylate (winey). Flavour active phenols include 4 vinyl guiacol (cloves), 4 vinyl phenol (barnyard, medicinal) and 4 vinyl catechol (plastic and smokey). Mousy can come from 2 ethyl tetrahydropyridine while cheesy and goaty are derived from fatty acids like isovalerate, caproate and caprylic acid. There is clearly a moving feast going on which is not possible to control let alone predict so brewers need to check flavours regularly and process the beers further once an acceptable level of funkiness has been reached. 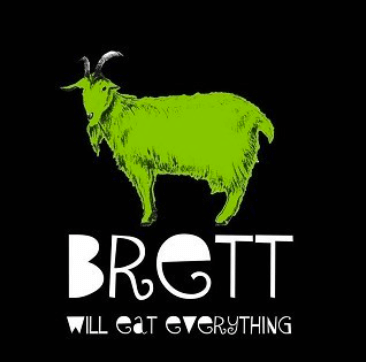 Brett is thus a complex organism and it is celebrated at an annual Carnivale Brettanomyces held in Amsterdam dedicated to an emerging interest in less conventional fermenting agents where brewers can compare notes.

Next month we shall look at some UK brewers climbing on to the funk wagon.

Beer drinkers are getting more adventurous and seem willing to sample, often at considerable cost, beers with wild, funky and sour flavours, often derived from the inside of a wooden cask. Funky encompasses hay, farmyard and horse blanket flavours, not a good description for townies who do not own a horse but you will know […]

Last month we considered the importance in brewing of the calcium and bicarbonate ion, of course there are other ions of significance in the water. Sulphate promotes crispness and accentuates hop bitterness but it can be overdone leading to sulphidic notes as in the famous ‘Burton snatch’. Chloride on the other hand provides fullness, so […]