Coronavirus – Brewers Rise To The Challenge

It is now over a month since all Britain’s pubs, bars and restaurants were shuttered with little notice a few days after we had been asked not to visit them for fear of spreading the Coronavirus. The UK has around 2500 breweries (mostly very small) and according to CGA some 116,500 licensed premises including pubs and restaurants. Across Europe it is reckoned that 23 million people are employed throughout the supply chain, the sector adds some €55bn in value and contributes €44bn in government income in the form of duty, VAT and employment taxes. In Britain around half of our beer is consumed in the on-trade although this figure is somewhat lower in Europe, only the Irish go to the pub more often that we do!

The term ‘catastrophe’ has been bandied around and it is hard to see how a lot of the hospitality and tourism industry will emerge unchanged. There have been well trumpeted government initiatives to ‘furlough’ employees and offer loans to businesses but it seems the vital cash upon which businesses depend is slow to appear and our beloved banks are applying their own criteria to slow things down, sometimes to a complete stop.

Brewers and licensees may be paying their staff from their own funds but there is still National Insurance and pensions to fund as well as VAT and duty payments to catch up on. With no income, cash is not going to last long before companies are forced to surrender even though their employees are supposed to have been saved. Some pubcos have offered a rent freeze but others hide behind weasel words and seem to provide little of substance to help their tenants. Already Halewood International has rationalised its Hawkshead brewing arm with 12 redundancies including the Head Brewer. 400 year old Wernecker Brauerei in Germany has given up and China Resources plans to close 25 of its 74 breweries, probably more on the back of a steady premiumisation of the Chinese market than the depredations of the virus. Nevertheless there will be more closures, lots more.

Yet the crisis has brought out the best of British and in true bulldog fashion the Trade has risen to the challenge. There was a load of empty Keykegs awaiting recycling after a London beer festival and enterprising do it yourselfer Bill Bremner has made six face visors out of each 20L keg. The Watermead pub near Aylesbury cleared his cask stock by delivering over 600 free pints to anyone staying at home as long as a pint glass was placed on the front step. We wonder whether his ‘ice cream van’ played ‘Roll out the Barrel’ to alert the neighbourhood! Publican Rob Lindsay in Derbyshire took a shower in a keg of overage beer to entertain his isolated customers. HMR&C has happily (for publicans rather than them) relaxed the rules on destroying beer in the pub cellar but the regulations are still a tad tortuous including having to provide a photo of you actually doing it. The Old Horse in Leicester even put its destruction of 800 pints on Facebook and the Gardeners Arms in Norwich poured the beer away to the tune played by the band as the Titanic went down! It has been estimated that there are over 50 million pints out there slowly going over age.

We all know licencees who keep cask beer until the end of its declared life to give a touch more maturity and condition but a cask will not go on improving forever. We can safely predict that the hospitality industry will be the very last to return to normality as restaurants cannot seat diners far enough apart and a pub quiz would be pointless if contestants could not go into a huddle. In the meantime pubs are delivering meals and some have turned into community shops. The new Guinness plant in Baltimore is baking 500 loaves a week for the local Maryland food bank.

Virtual on line gatherings have been initiated by Molson in Canada with hosts rewarded by vouchers to use once restrictions are lifted. CAMRA has the Red (On) Lion and even the retired brewers from Burton on Trent’s Coopers Tavern are meeting weekly on Zoom with a chance to see into their living rooms. Similarly beer tastings have been arranged via Zoom with participants buying identical cases from Heineken’s Beerwulf or Beers of Europe. Gabe Cook the self styled ciderologist hopes to host the world’s biggest Instagram cider tasting.

On-line suppliers are obviously rushed off their feet for as soon as the toilet roll and hand sanitiser stocks been replenished that the panic buyers started in the beer aisle; leaving Corona behind for some strange reason! Early on the Round Corner Brewery in Melton Mowbray was offering beer in exchange for over-bought toilet rolls and those without could pick rolls up for a small donation to Brewgooder.

Small pack brewers are still in business and as beer sales move to the off trade an uplift of 30% alcohol sales has been reported as well as a number of A&E departments telling of a rise in alcohol related attendances after a few too many quarantinis!

Smaller brewers without any small pack facilities are struggling. A survey of SIBA members showed that that two thirds have shut up shop completely and sales have slumped by 82%. Over in the States, about half of the nation’s 8150 smaller plants have said they will have to close permanently after three months.

Cask beer brewers have been badly hit, some have decanted casks into plastic milk containers but unused bag-in-the-box wine cartons and 5L mini kegs are hard to come by so few have the technology to do anything sophisticated. Hand seaming of large cans for a carry out is rare in Britain and carry-out growlers are virtually unknown. Screw top bottles are a possibility and CUB in Australia has supplied one and two litre bottles to 100 pubs in the big cities. There is a general shortage of containers as can and bottle demands have escalated but it is gratifying that some brewers are sharing stocks of unbadged cans and have helped others to package product. Stateside brewers have a double whammy in that fuel ethanol plants have cut back production which means there is a shortage of CO2.

Distillers have been quick to provide alcohol for making hand sanitiser. Fynoderee thought it best not to manufacture from the tops and tails in case the sanitiser smelled of gin! Stocks of neutral spirit have been generously raided and some distillers have removed the alcohol from beers that brewers will be unable to sell. Similarly A-B Inbev and Heineken have offered the alcohol removed from non alcohol products. Kiuchi in Japan (Hitachino brands) is converting unsold kegs of beer into gin and returning that to the customers so that two 50L kegs begets ten bottles of gin and the customer just pays for transport. 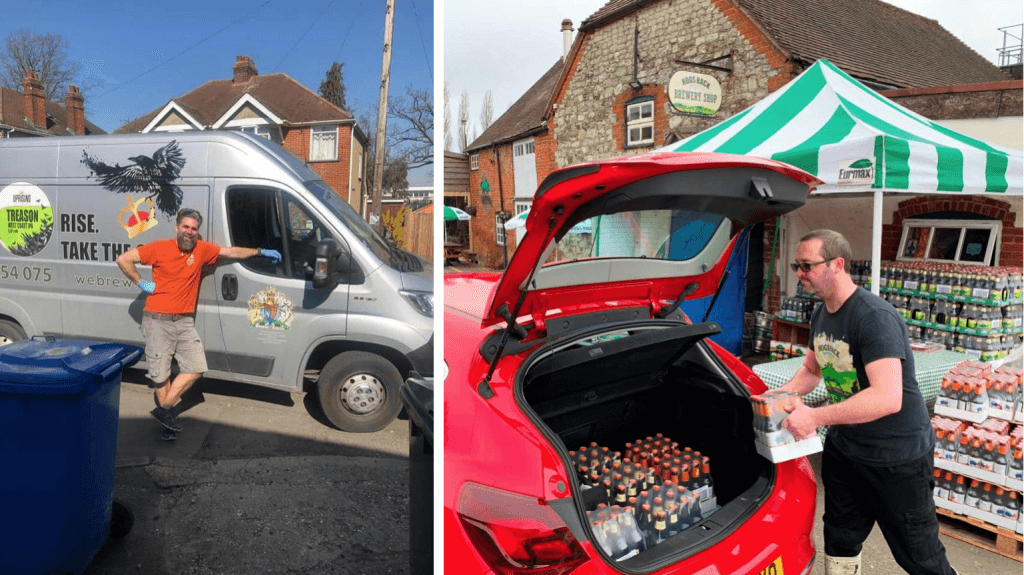 Windsor & Eton makes a delivery // Hogs Back has a drive through

CAMRA has partnered with the Society of Independent Brewers (SIBA) and Crowdfunder to help the industry during the shutdown. Its Pulling Together campaign aims to encourage ideas to stay afloat by launching a new online shop, offering takeaways, home deliveries, increasing paraphernalia sales or providing redeemable pay-up-front gift vouchers for locals. It also hopes to put the public in touch with local initiatives in their community while Crowdfunder is helping businesses to tap into their community for financial help to weather the crisis. Café Solidair in Brussels is an on-line pub where you can purchase Alken Maas beers to drink in their chosen pub once things return to normal. BrewDog is offering free vouchers for a glass to be used in the first couple of weeks after pubs reopen again while Anheuser Busch will give a couple of cases of Busch beer to couples forced to delay their nuptials. 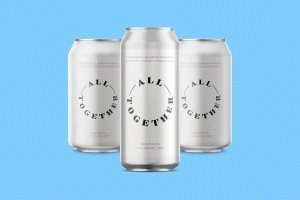 300 brewers so far are planning to make ‘All Together’ IPA

Windsor and Eton has a well-established on line shop and its vans, no longer needed for pub deliveries, are busy dropping off beer to local customers. They have rushed out a blended whisky called Curfew as well. Hatfield House in Belfast has four vans touring around offering draught Guinness to those who miss the lengthy two stage pour. Signature Brew in London has gone further by inventing the Pub in a Box which supplies cans of its beer along with a playlist to enjoy suitable music with the beer, a musical quiz as well as beer glasses, crisps and of course a beer mat. The Titanic version has six beer mats and includes smoked pheasant crisps.

Yorkshire’s Sam Smiths are giving their dray horses a bit of exercise by delivering beer as well as wines, crisps and potatoes to homes around Tadcaster. It appears that authorities are largely turning a blind eye to perhaps unlicensed innovation but the police have said that anyone delivering in a private car negates their insurance unless business use is specified. Police have also made it clear that any lock-ins in the pub will lead to a permanent loss of licence.

15,000 were supposed to assemble in Texas for the annual Craft Brewers Conference in April; the organisers have now arranged two on-line lecture sessions every day for five weeks to get through the programme and there is even a happy hour for discussion but presumably you have to provide your own beer!

An idea by Other Half Brewing in hard hit New York City has led to All Together, a global collaboration, which has been taken up by more than 300 breweries, using pretty much the same recipe to raise money for brewery and hospitality workers. 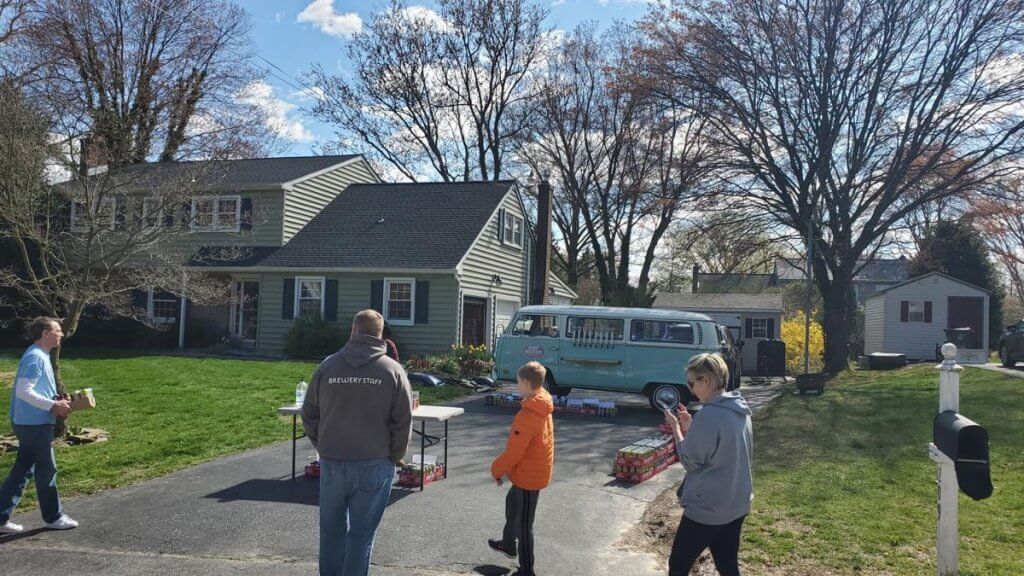 It is a bit early to think about starting up again but brewers need to mug up on yeast husbandry so they can get back into production quickly. Dried yeast does offer a solution for the little boys but that will be the next thing to run short. BBPA has suggested that the trade will need three weeks’ notice of being allowed to reopen so that the supply chain can be filled, staff reassembled and customers get used to the idea of going out again.

Finally Coronavirus has taken another victim. Corona beer itself as Mexico in common with South Africa, Panama, Thailand and no doubt other places has declared the brewing of beer to be non-essential and shut down all production.