Fancy a boosh? Have you ever heard of kombucha?

Weekend magazines are forever covering the up-and-coming food and drink fads. We see edamame noodles, poké, fresh turmeric root, pignoletto, mastiha and among other things, that few have heard of, let alone tasted, is always kombucha. 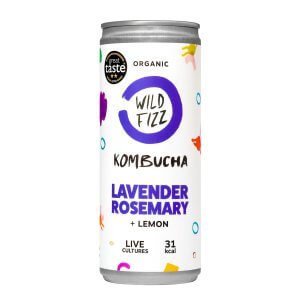 This is a fermented tea which originated in the Far East many centuries ago. This refreshing folk remedy and cure-all originated in China and spread westwards over the centuries being particularly popular in west Russia, the Baltic and northern Germany.

Microorganisms interplay to create a diverse metabolic soup which is often quite acidic. The bacteria (known as probiotics) that it contains have been shown to balance the bacteria in the gut and improve digestion and is popular as a cult-like general cure-all.

The Brits have a long way to go to catch up with the States where each city has its own collection of tap houses blending kombucha with flavourings like cranberry, hibiscus, lavender, grapefruit, mango in varying combinations where the sweetness balances the acidity. Customers come in to collect their daily supplies usually in 750mL fliptops or growlers while tasting the latest concoction and having a chat about yoga or the newest health fad. 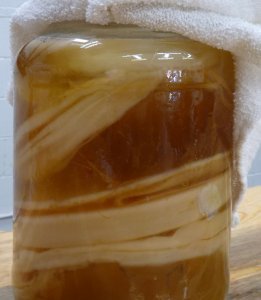 The active fermenting agent in kombucha is called a scoby – symbiotic colony of bacteria and yeast. The scoby is not a pretty beast; technically it is a zoogleal mat, it is translucent, slimy and looks like an unidentified specimen from a nineteenth century anatomist or else something from the Invasion of the Body Snatchers. It is the rubbery cellulose pellicle formed by acetifying cells which trap both bacteria and yeast in a neat package. The scoby is transferred from brew to brew much like the valued brewers yeast said to have been nurtured since the brewery founder started his business many centuries ago. The Americans use the term backslop which perhaps undervalues its contribution to company success.

Sometimes called a ‘kombucha mother’, the microbial populations in scoby cultures do vary. The yeast is usually Saccharomyces but Brettanomyces, Candida, Pichia, Schizo- and Zygosaccharomyces are known; the bacterial component almost always includes lactic acid bacteria with Gluconacetobacter xylinus (now Komagataeibacter) to oxidise yeast-produced alcohols to acetic and other acids and construct the mat which protects the colony. The spent culture medium will be slightly effervescent, acid and slightly alcoholic.

In simple terms, the sucrose is metabolised into glucose and fructose, and on to gluconic acid, ethanol and acetic acid. Glycerol has also been reported along with lactic and glucuronic acids. The tea provides nitrogenous compounds to nourish the colony. All the micro organisms inter-play to create a complex metabolic soup which, if you are not careful can be throat burningly acid and more alcoholic than you or the excise authorities might like. 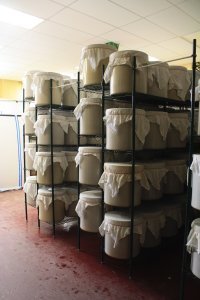 The craze for kombucha in the US started around 1992 with an article in Search for Health, before that it was something that 95 year old grannies might have made at home. It became notorious when the regulators discovered elevated alcohol levels in many bottled kombucha products forcing retailers to pull the drinks from store shelves. That was back in 2010 and in response, kombucha suppliers reformulated their products to have lower alcohol levels so that, at below 0.5%ABV, they do not attract tax and can be labelled non alcoholic.

Sales are booming with the global kombucha market valued at around $1bn today but projected to reach just under $5bn by 2025, growing at a CAGR of 23.0%. European predictions from a rather standing start are even higher with Britain, Germany and Russia leading the way.

PepsiCo purchased kombucha maker KeVita for some $200 million in 2016 and it is now the world market leader. Brewers have also been busy mainly at the ‘hard’ end (alcoholic) with A-BI’s KomBREWcha at 3%ABV; Boston Beer Company with Wild Ginger Blueberry Kombucha at 4%ABV and Deschutes Humm Zinger Radler at 4.3%ABV. Molson-Coors has Clearly Kombucha (<0.5%ABV). 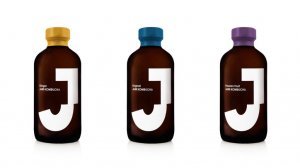 Kombucha has moved from the health food shop to the supermarket and even pubs and restaurants. Supporting the current trend towards lower alcohol drinks, some 30 Michelin starred restaurants in the UK offer it on their ‘wine’ lists. Some even have flights of different flavoured kombucha to try with different types of food. Heightened acidity being able to cut fatty foods and the smokiness of some teas, believe it or not, goes well with chocolate puddings! You can even make cocktails with it!

Kombucha has been trumpeted with claims that it can treat a wide variety of human illnesses, indeed the ancient Chinese called it the ‘immortal health elixir’. Remarkably these have included AIDS, cancer, and diabetes. It is also said to provide other beneficial effects such as stimulation of the immune system, boosting the libido to the reversal of greying hair and the prevention of bad breath. Yet any scientific evidence of kombucha’s beneficial effects in humans is entirely absent. It retains an ardent and perhaps addicted following as a pleasant tasting curiosity. 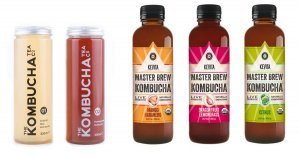 Black and green tea are the usual substrates but some like to gain further therapeutic advantages from herbal additions like nettles, blackberry leaves, coltsfoot, plantain, lime flowers, birch and strawberry leaves as well as wormwood, gentian root, milk thistle or rose hips. Some herbs with high levels of volatile oils like sage, peppermint, camomile and St John’s wort should be avoided as, in the long run, these active substances can reduce the vigour of the bacterial mass and gradually slow the process, perhaps to a standstill. Herbs are often low growing and have high levels of entrained soil spores which can only be safely removed by pasteurisation or a long period of boiling which is not practicable nor good for the survival of active components. Some makers like to add some lemon slices but again there is a risk of surface spore contamination.

Model systems under highly controlled laboratory conditions suggest there will be an ethanol content from 0.75 to 1.25%ABV, commercial samples over 2% are rarer but some, still labelled non–alcoholic, have been found in excess of 5%! US commercial makers use a very light fermentation with a sugar addition rate perhaps as low as 13g/L with corresponding low levels of acidity ameliorated with post fermentation additions of fruit extracts or perhaps ginger. 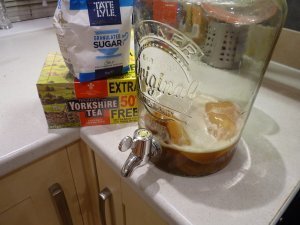 You can make your own – tea, sugar, a scoby and a bit left over from the last batch so the fermentation is acid to start with.

I would comment that it is difficult getting much recipe or process information out of kombucha brewers compared to the openness in the beer brewing trade. Maybe the term ‘proprietary’ is the watchword amongst American small businesses. Paul Haney who runs Kentucky Kombucha with his wife Alison out of Springfield in that State was the exception. He uses a blend of black and green teas or sometimes red bush. Paul ferments for 10-20 days at 22-24oC and uses only 13g/L of sugar, recycles only 60mL/L to start the next batch and his six pound scoby in a 25 gallon batch is only 30g/L.

Bring on the boosh!