Getting Pubs Back To Normal…

Will they or won’t they? Can we or can’t we? Brewers and pub owners have been bombarded with rules, guidance, surmise and gossip over the last 100 days since pubs were shuttered.

The grim reality? Staff at the Quinary Bar in Hong Kong, which re-opened its doors on 28 April.

As we discussed in the April blog, some brewers have completely shut up shop for the duration, others have moved towards smallpack and forged new supermarket contracts and arranged home deliveries or else pick-up points. BrewDog, adventurous as usual, has trialed drone deliveries in Ohio and Berlin but only to customers in their spacious beer gardens. Beers have been packaged for hospital staff, ambulance drivers and care home workers to reinforce the ‘local’ cachet which these guys hope will continue once their usual outlets reopen. 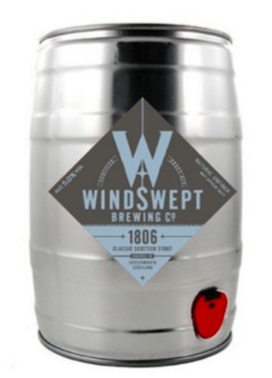 We have seen beer in two pint milk containers while others have procured 5L mini kegs, some are decorated (with a longer lead time) but it is easy to add a wrap round belly label to a plain one and get to market quickly. Bag in the box, 5L and 10L are also readily filled as are the long established polypins. I suspect that those who have not been active in the community will find it difficult to get going again. 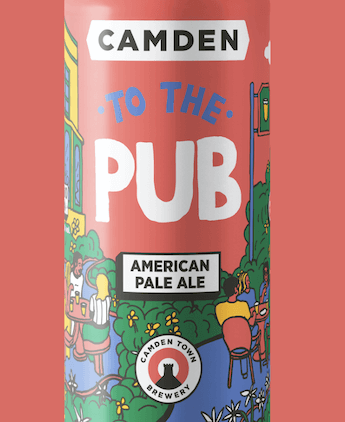 The reduced level of brewing in the UK has led to a run on Marmite yeast extract and the firm is only filling 250g jars until Britain gets drinking beer again. Workers at Wadworth in Devizes went to a meeting expecting to hear they were to start production again but 57 redundancies were announced and its brewery move put on hold. Ten out of ten to Thatchers who are giving a free 50L keg of cider to its free trade customers. Full marks as well to Camden Town which is offering a free keg of the new ‘To the Pub’ beer for every two kegs of lager ordered. Bud has launched Save Pub Life to enable pub-goers to gift cards for their favourite pub to use once they reopen, with Budweiser Brewing Group doubling the value.

Unfortunately most pubcos will be seeking the June quarter’s rent payments even though there has been no trading. Some family brewers have shown understanding towards their tenants’ financial needs, by cancelling rent, we know of JW Lees, Adnams, Arkells, Joseph Holt, Robinsons, Harveys, Shepherd Neame, Everards, Wadworth’s and Palmers. Hall and Woodhouse are exemplary in not asking for rent during the lockdown, for eight weeks after trading recommences and then half rent for a further four weeks. Thwaites and probably others are suggesting its tenants apply for bank loans; in order to pay their rent and sustain the brewery’s business!

Brewers have started mashing again rather speculatively, while pubs remained unsure of the rules saying they may just stay closed until everything is crystal clear. In the meantime it is reported that Heineken is dispatching keg beer which had gone over age in its warehouses citing the better control they have over quality on their own premises.

The UK government’s original recovery plan suggested that pub reopening should not even be considered until early in July and later than that in Scotland. UK Hospitality forecasted a ‘lengthy and painful recovery with significantly suppressed trading for several months’. But the threat of 3.5 million job losses in the hospitality sector forced the idea of fast tracking the opening up pub gardens earlier however that idea soon got scotched. A group of ministers dubbed the Save Summer Six were charged with somehow getting hospitality going again.

The crux of the problem was the government saying that it will not sacrifice health for the economy while there are still significant numbers of new cases each day even though the death rate from the disease is dropping. The two metre rule was said to be a ‘risk based assessment’ and not a ‘rule’ but it does seem to be about as arbitrary as a unit of alcohol. It would mean a pub could only entertain some 20% of its usual customers. Mr Johnson did not want to override the advice of his wingmen scientists who have put the fear of God into us, so much so that many of us may not even want to go back to the pub yet! Some 95% of the population do not have any antibodies. Even though there are fewer infected folk about, that is an awful lot of tinder for a second flare up.

One metre as in operation in France, Sweden, Denmark and China as well as being approved by the World Health Organisation would allow four folk into the same area. BBPA says the one metre rule would allow 75% of UK pubs to reopen. So inside and outdoors trading will recommence on July 4th at one metre plus a shed load of new rules.

A selection of garden dining pods. Take your own tomatoes!

Pubs will be able to erect a marquee without planning permission and tables can be put on pavements where the planning fee will be waived. Liverpool plans to close some city centre streets and allow pubs to over spill into the middle of the road to make parklets and the City is offering grants to cover the cost of outside furniture. Licensed outlets will be able to convert their car parks and terraces into temporary beer gardens and they can even sell beer for people to take into public parks

According to a Budweiser poll, some 93% of Brits are keen to return to the pub with 35% intending to visit within the first week. Caterer.com reckons that some £3.8bn will pass across the bar in that first week. However a report from China by CGA where bars have been open for a while showed that 50% of drinkers had not been out yet.

Brewfitt the keg dispense people has re-designed a beer dispenser into a high volume mobile hand sanitising station. The device has a 30L KeyKeg of Holchem sanitiser and can morph into a mobile keg dispenser again when it is no longer needed. Avani and Chemisphere have produced useful guides on how pubs can rejuvenate beer lines, ice machines and glass washers once they can get going again. 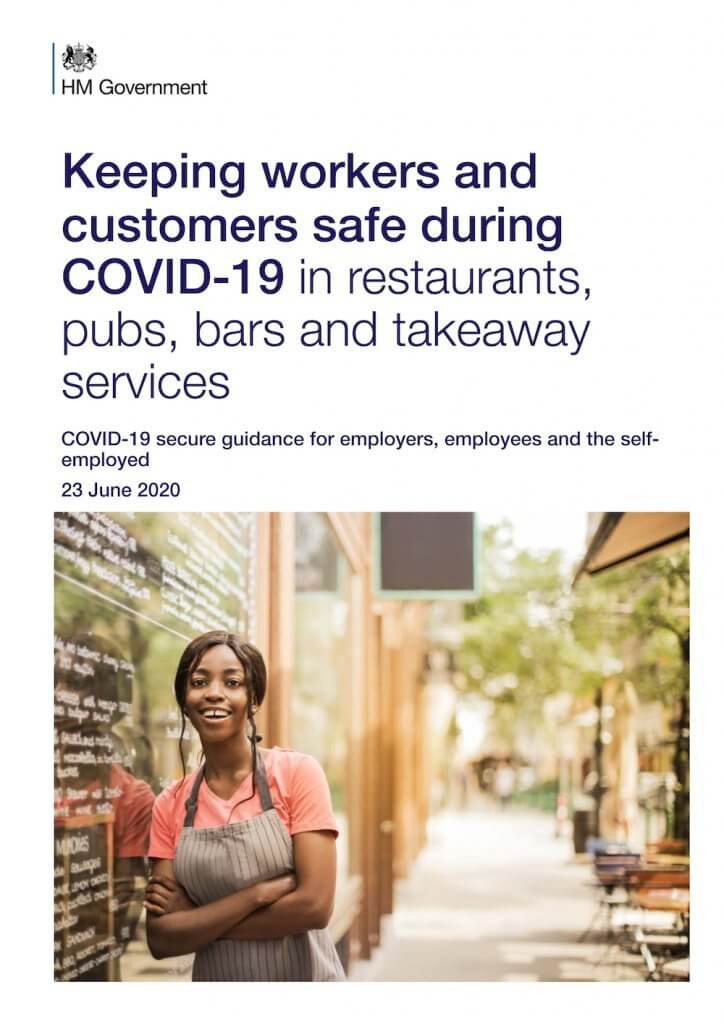 There can be no live music, no sport on TV, no DJing, no dancing, no standing at or on the bar, no quizzes, no taster glasses, perhaps plastic ‘glasses’. Any music will have to be soft so that people are not encouraged to talk too loudly. Perhaps table service only with no buffet bars. Even time limits on customers have been suggested. It is probably a mistake to rely on people’s common sense as we have had a lot of evidence of it significantly lacking on protest marches and at our beaches and beauty spots. So guidance (or are they rules?) is contained in a 43 page Home Office blockbuster including details of overhauling the ventilation system to keep the odd virus on the move and bike racks so that staff and customers do not have to travel by public transport. Opening hours may be restricted as shift patterns should alter so that staff only ever work with a small group of the same people. Roomy barn boozers belonging to Wetherspoon and Brewdog will be OK but cosy locals may still have difficulty getting enough punters through the door to cover the costs of opening. 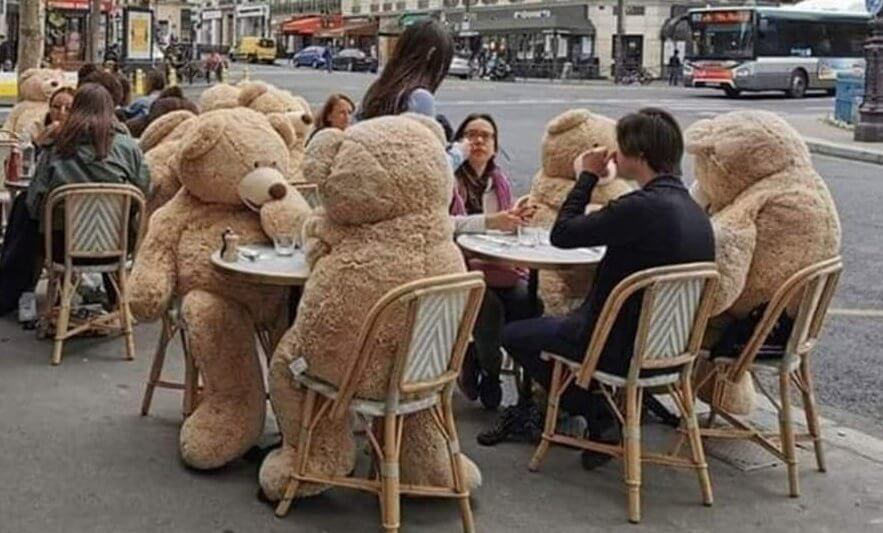 Forcing distancing on the streets of Paris Photo by Dawn Robertson

So what might your first pub visit for over three months look like? First you might notice a queue outside, would you be willing to wait? Will you have to book up which will make collecting contact data easier. Will you have to wear a face mask on entry and if you go to the loo? Will it be obligatory for your name and contact details to be logged for possible community tracing later. Will you be zapped to check you are not running a fever? Once inside there will be a hand sanitiser station, you will be ushered to a carefully separated table by a masked and gloved member of staff. It might be screened from others with Perspex panels. You might only be allowed to sit side by side rather than facing. Mr Fogg in London’s Mayfair will place mannequins at table places they do not want you to sit at. There will be a disposable pocket for your face mask. You might be offered pitchers of beer or perhaps a table dispense unit to limit contact with staff.

If there is no table service there will be plastic sheeting at the bar and an orderly queue to get served. You must not touch the bar and all surfaces must be wiped down every quarter of an hour. Your drink will arrive and you pay only by card and preferably contactless. If you are eating, menus will be disposable or else there will be a QR code to download it. Condiments will be in sachets and cutlery/napkins will be delivered with your food. After you leave, anything you might have touched will need sanitising before the next customer can be seated. 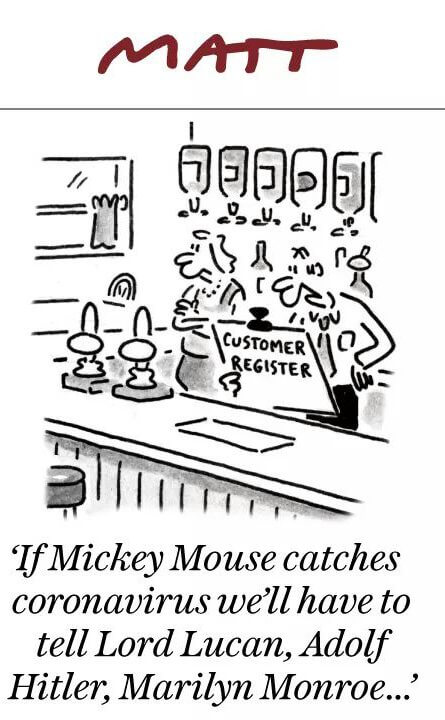 If you get caught short, there should be sanitiser prominently outside the loo to be used on the way in and out. A one-in-one-out policy will be needed to ensure distancing behind closed doors. Toilets will need sanitising much more often adding to pub costs. This all might feel a bit sterile but it is the only way you are going to get a foaming pint of cask ale.

Will the amount of drink have to be policed so that customers do not become over-ebullient and forget the one metre rule? People are only supposed to meet with one other family but how can a publican identify those who are in these bubbles? Will brawls break out between those wanting to social distance and those who won’t?

There has already been a degree of dissent with Marston’s saying it will open 90% of its houses but will not make bar staff wear masks as that would make pubs feel like hospitals. Punters will not be forced to wear masks and there will be pens and paper to collect contact details only if they want to.

With changing drinking habits, the pub sector was already in difficulties with closures running at 15 a week before all this happened and it is still hard to see how all of them will be able to reopen. There will be spot checks that businesses are complying and threats of a shut down if they’re not. Yet if it does not work the authorities will not hesitate to go into reverse and can the trade afford to dump another cellar full of beer?

This blog was written before any pubs in England actually opened