Getting Your Kegs Back – Part 1

Life used to be so much easier; most pubs were owned by a single brewery, containers were delivered, sold, picked up by the local draymen and returned for washing and refilling. The Big Six of Bass, Allied, Watneys, Courage, Whitbread and S&N were emasculated by the Beer Orders and are now no more. Today getting on for 80% of the nation’s beer is produced by four overseas based wholesalers; Anheuser Busch InBev (currently morphing into the Budweiser Brewing Co), Molson Coors, Carlsberg Marstons and Heineken which is the only one still owning any pubs. Today just as many outlets are owned by pubcos as caught the attention of the government back in 1989. 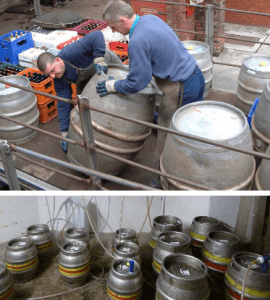 There are now over 3000 UK breweries, almost all of them putting beer into cask and in a very competitive market are vying to get into pubs further and further from their bases. Going further afield you need more containers. There are also more containers in circulation as they are getting smaller. Seemingly draymen are getting weaker egged along by ‘elf and safety considerations. The 245L hogshead has given way in most places to the 100L as the largest. Cask Marque recommend that a cask should be sold within 72 hours thus encouraging ordering of smaller sizes for mid-week trading which has much improved quality on sale but needs more casks. 4.5gallon (20L) pins are attractive if you have a local captive logistics set up but they are also attractive to home brewers!

Casks and kegs are valuable assets; if a typical 50L keg costs around £75, each brewery has a substantial amount of capital tied up in its container fleet. CO2 and other gas cylinders also cost about £60 each. Brewers can ill afford to lose either. It is estimated that there are over 10 million beer containers in circulation with the big boys owning fleets well into seven figures.

Wind back sixty or so years, wooden barrels and hogsheads ruled and 90% of beer was consumed in the pub (it is now under half). Smaller firkins were few and far between at perhaps 1% of the casks filled and probably reserved for barley wine on the back bar at Christmas time. There was a small market in pressurised brewery conditioned beer, initially in metal lined casks and later aluminium kegs. Early metal containers were cast aluminium or lined mild steel ‘brown bombers’ and were almost as heavy as the casks they were replacing. Wood needed armies of coopers, the best timber came from behind the Iron Curtain and the washing process demanded a fill with boiling water to get the inside anything like sterile so the writing was on the wall. 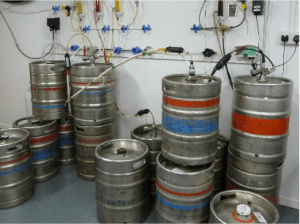 Aluminium casks and kegs were eventually deep drawn in HE30, an alloy containing manganese, magnesium and a bit of silicon. They were lined in epoxy resin but could not be cleaned with caustic based detergents as that would attack any bare metal and produce hydrogen gas. After washing, casks would be inspected for any trapped wood from the old shive or keystone; an operator had a sharp pointed metal spike to try and spear the errant material. The epoxy lining would be damaged if he did not hit the target first time. Concerns over a link between aluminium and dementia surfaced as the millennium closed; the BBPA conducted a survey but it was never put into the public domain so everyone assumed the worse and conversion over to stainless steel accelerated.

The main problem with aluminium was its lowish melting point (660oC) along with a ready scrap metal market making theft of containers attractive to unscrupulous recycling merchants. I have some notes dated 1982 when the industry reckoned it was losing some 3% of the population every year. More recent surveys have put it as high as 8%!

304 stainless kegs are slightly heavier (13kg against 11kg for the lightest aluminium 50L keg) but the surface is inert to both beer and cleaning fluids and the finished keg is slightly more robust if it does get dropped. Stainless steel melts at 1500oC which is a technological step too far for most scrappies but they can still cut them into small chunks and hide them in bales of other recycled steel. The scrap price is not as high though. 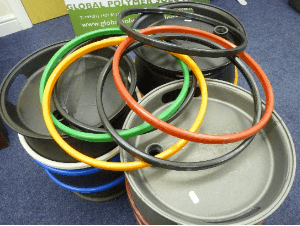 Another strategy is to lower the value of the container by going plastic. Early on plastic did not have a good press. One manufacturer glued two identical halves of the cask together and the trade joked for years about hapless cellarmen trying to drive a tap into the wrong end. The casks were criticised for being too light and easily moved but I guess that was down to cellarmen using traditional force to drive the tap into the keystone and not adjusting to the new containers. More serious was a fatality in the States when one of these heat-welded kegs blow apart when an operator was trying to remove ullage under pressure. A modern plastic container has a blow moulded inner with no joints which is supported by a pair of outer domes secured in the centre by locked rolling rings; no weld failure is possible as there are no welds.

Also plastic are one trip kegs where a large PET ‘bottle’ is supported in a stout cardboard outer. Petainer, KeyKeg and Dolium now have a top grip ring and a base cap glued on so you can actually see the level in the keg if the advertising brand sticker is not too large! The cardboard outer is still optional, it makes handling easier, offers even more promotional space but obviously costs more. These kegs are easily recyclable but you may need to separate card from plastic. Once an easy means of depressurising when empty was found and the broaching coupler made to fit standard cellar equipment, a number of brewers started to use them for distant customers particularly those overseas. Being a lot lighter, logistics costs will reduce as well. Getting metal kegs back from export was always a problem; send new ones and none come back, decide to sacrifice your oldest ones and you get all of them back – it is a funny old world!

Next time we shall look at combating theft, electronic identification of containers and even getting them off your books to someone else’s responsibility but at a cost.

A selection of one trip PET kegs; KeyKeg display, kegs from Dolium and Petainer