Getting Your Kegs Back – Part 2

To combat ongoing theft, the industry has signed up to a code of practice so that kegs may only be disposed of by the brewer and scrapped by accredited bodies so new brewers can only buy secondhand from other brewers or keg suppliers. In theory there should be no illicit usage as car park markers, boat mooring bouys, novel bar stools, rotisseries, tandoori ovens or even urinals! Such items are readily available in trade brochures and a quick look on US E-bay does show that kegs themselves are still being offered for sale. 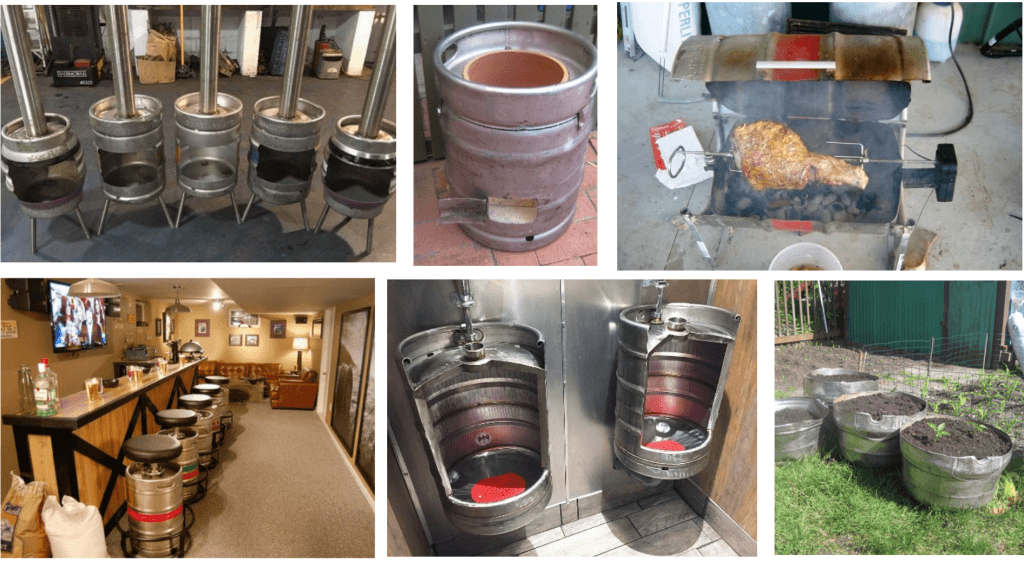 UK brewers also devised a container colour banding system so that draymen with a good memory and eyesight would know which kegs they were allowed to pick up. With over 3000 UK brewers today and only 15 colours, I guess even the fifth band is getting used up and there is not always room for a sixth! BBPA and SIBA oversee this voluntary system to avoid duplication. As a final check the brewery owner should be embossed on the head or chime of the tub. 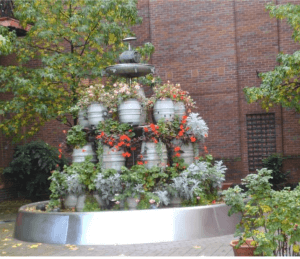 This is a Cask Fountain at a plant. Pretty enough and still on the brewery premises but it does not set a good example for container usage.

Theft would not be possible if everybody looked after the kegs in their care. It is all too easy to leave empty kegs in the open overnight before the next delivery. Thieves know the dray routes and where the pubs are so a tour round in the early hours could prove fruitful. A container deposit scheme as used in most States over the water would go a long way to solving the theft problem but every recent initiative has foundered on worries about impacting cash flow on the most cash strapped houses even though there would be no adverse cost to those outlets returning their containers. In Michigan for instance a rise in the deposit from $10 to $30 at least raised the charge to the keeper to above the scrap value and the situation did improve. In the UK, a £50 charge was mooted back in 2008 but never implemented.

Ten years later there was another plan to introduce a paper transaction where a charge would only be made if containers were not returned, leaving the licensee with a duty to look after them. Detractors say such deposits merely passed the cost and responsibility down the chain where costs will increase instead of addressing the real problem which is theft. Meanwhile efforts continue to prevent these taking place including making sure contractors wagons do not park up in insecure areas and that closing and seasonal outlets are inspected for assets. Thefts from smaller brewery industrial units are well documented.

Abandoned, perhaps stolen but definitely unloved; Two firkins in a back garden, Paulaner kegs cleared out of an old guesthouse and a closed account, the victim of covid. All near the author’s home.

Back in 2000, the industry formed a trade association called Kegwatch which now has over 1000 members. It will investigate keg finds and alert the police as appropriate. Brewers can input details of foreign kegs they find in their depots etc into a piece of software called Spatrak and if you have lost some you can see who has got them. There is a network of regional depots and you arrange to pick them up or else pay for Kegwatch’s logistics partner for repatriation. I am told that some 180,000 kegs find their way home every year; that does not sound a lot in the greater scheme of things but if you are a start-up micro with only a few dozen, this scheme is a godsend.

However none of this actually tells brewers where all their kegs in legitimate circulation actually are and how many they have still got. Turning containers round faster of course means you do not need so many of them. A best guess of the population a few decades ago involved a census when returning loads of empties were stripped and the dates from all the old labels laboriously transcribed. Less than half of one percent of loads got sampled but crude statistical analysis did estimate the population and led to huge purchases of new ones to meet forthcoming peaks in trading.

William Lees Jones from J W Lees, the Manchester based regional brewer recently released some figures saying that for every container sold through his own distribution fleet he needed 2.5 containers but if they went further to a pubco he would need eight!

As we hinted earlier with changes in the pub trade, containers are going further into properties the brewery does not own and knowing who has got yours is much more complex. Home Brewery in Nottingham, before S&N took them over, had an embryo bar code system. With the code on each keg, each could be tied to a specific racking for backward traceability. Filled kegs would be scanned individually out of the warehouse on to the dray and wanded into each pub against a barcode on the cellar door. In reverse the empty would be scanned out of the cellar and back into the brewery. Quite a sophisticated set up for 1980 but I suspect computing power was not quite up to doing much with the wealth of information and kegs still went missing.

RFID devices on kegs from Molson Coors and two types from Heineken.

Today kegs can be fitted with RFID transducers which respond to incoming signals but the technique of getting the information into the system is just the same. Early users had short range low frequency passive units but today UHF devices can detect all 700 kegs on a returning load of empties at the push of a button or as the trailer passes a fixed point in the brewery yard. One problem not entirely solved is the transducers being knocked off but they are positioned close to the chime for some degree of protection and the glue or weld is tenacious. Ultra high frequency detection is now being developed by Air Liquide which is the world’s largest supplier of industrial and medical gas cylinders, they have over 80 million of them. Perhaps an enhanced system will find its way back into the brewing world before too long. 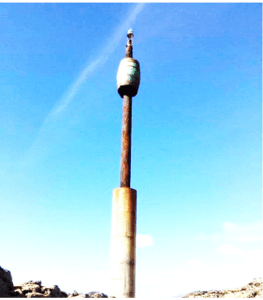 Is this old Bass wooden cask used as a beacon on the end of Bude breakwater an illicit usage?

Even more exciting is the Thinxtra software being developed by US Kegstar. The device has three radio transmitters to cover every wireless environment and can allow customers to tap into data showing the location, temperature and orientation of each keg in addition to whether the keg has been cleaned or filled, is being off-loaded from a wagon or is ready for collection at a pub.

It is of course possible to sell your container fleet to a third party who will then manage them, maintain them and the brewer pays on a ‘per fill’ basis. This gets the kegs off the capital assets register and moves the cost of containers on to the revenue sheet. Coors sold theirs to Trenstar UK in 2005 but the heavily indebted company went bust citing unsustainable level of loss and Molson Coors had to buy them all back off the administrators. Close Brewery Rentals offers a similar set up to manage your kegs again on a ‘per fill’ costing but the kegs are not shared in a central pool. The scheme is backed by Close Brothers Bank, one of only two banks which still turned a profit during the 2008 financial crash and the lessee has to make good any losses to top up the fleet or else rent CBR ones thus avoiding the pickle which Trenstar got into. Close also operates its own ECask and EKeg systems badged as a ’fill and forget’ set up. Here a brewer calls for a batch of casks or kegs, fills them and sends them off to distant wholesalers. When the wholesaler picks the empties up, they have bright orange bands, they are returned to Close for redistribution. CBR boasts a fleet of over 2.5 million containers.

So brewers can rent and pay per fill, longer term rentals can pay monthly irrespective of usage, they can rent to own as in a hire purchase arrangement, they can sell and lease them back or any combination of the these.

Further US companies are offering container rental services in the UK; Keg Logistics, Kegstar and US giant Hillebrand are now in the market but until theft is eliminated the ultimate cost of renting to the brewer will continue its inexorable rise.

Can we ever stop these…. becoming these?