We have female Ice Road truckers, firefighters, submariners and perhaps soon front line combat troops. During the month of World Women’s Day, what is the current situation in the drinks industry?

Women’s more discerning taste buds have long been appreciated in the spirits business with noted master blenders like Rachel Barrie (Brown Forman after Morrison Bowmore and Glenmorangie), Stephanie Macleod at Dewars and Kirsteen Campbell at Macallan while Joanne Moore is in charge at G&J Distillers in Warrington (was Greenalls). 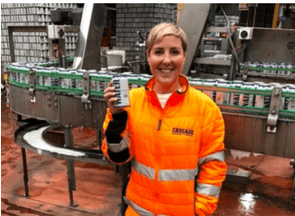 Women now hold many senior positions in the brewing profession. As far back as the 1970s, Heriot Watt University Brewing School had the redoubtable Professor Anna Macleod, who chain smoked cigars and could keep up with the most hardened of male drinkers! Katherine Smart headed up SABMiller’s worldwide brewing operation before A-B InBev took over and she is now Global Technical Director for Diageo. Ann Fahy ran Courage’s Berkshire Brewery until she returned to the States in 2003 and Ireland’s Maggie Timoney is currently in charge at Heineken USA. Sarah John at the tiny Boss Brewery in Swansea had a high profile tussle with Hugo Boss over branding. Bhavya Mandanna is Production Director for Carlsberg in Denmark. Four sisters run American’s oldest brewing company – the 4mhL D&G Yuengling operation in Pottsville and Tampa. Anita Holdsworth Group Head of Quality for Asahi in Australia. Paola Leather was until recently the Quality Manager at St. Austell after gaining experience as Head Brewer at Skinners, Head of Brewing Services at Campden BRI and Brewing Production Manager at Brains in Cardiff. She also finds the time to run her own rum importing and blending business. 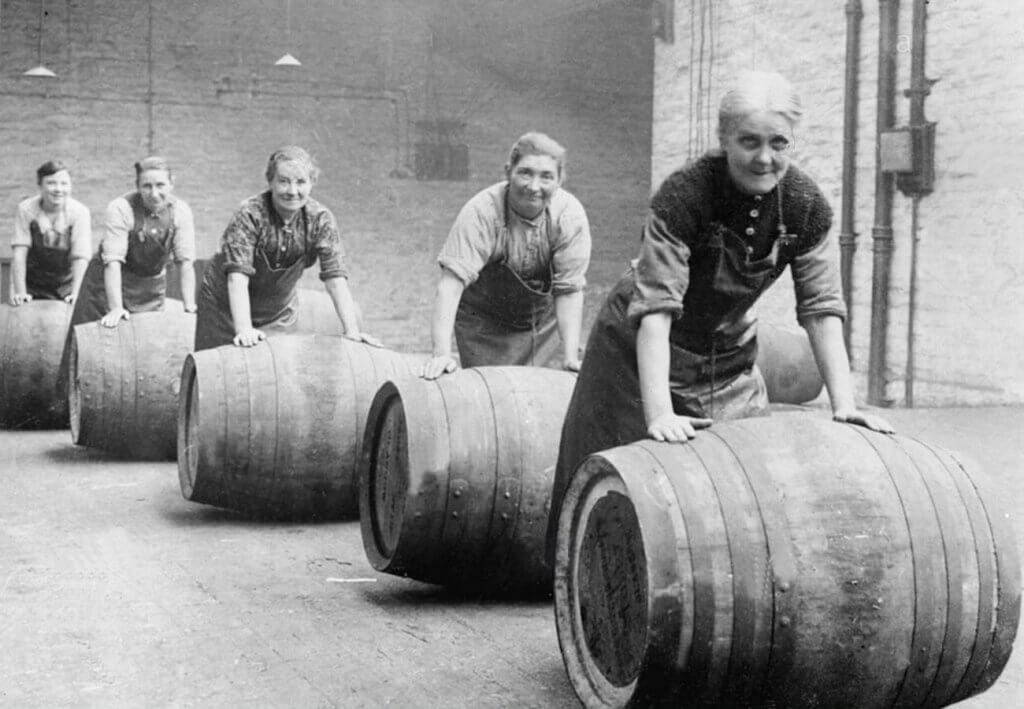 Women employed at Glasgow’s Wellpark Brewery during the Great War. Photo from the National Brewery Centre

There are of course many more and the proliferation of micro breweries to perhaps 2500 in the UK alone presents a host of job opportunities with these breweries getting a hefty duty rebate to encourage employment and investment. From its earliest beginnings brewing was a cottage industry and was usually carried out by women. There are famous medieval court records in Southwold showing that in 1345 Johanna de Corby and several other ‘ale wives’ were charged with selling short measures, serving poor quality ale and even fighting with their customers! The advent of the common brewer and the growth of pub estates moved brewing into much larger businesses and the descendants of Joanna were muscled out, quite literally.

Although Agnes Mountfield was reputed to have been Britain’s first lady head brewer at Highgate in Walsall back in 1914 it has taken until the latter part of the twentieth century to see her successors. Fast forward and now we have Sara Barton who was first to set up a microbrewery, that was Brewsters in Grantham. Sara had studied biochemistry and became intrigued by the yeast cell and took a Masters at the Watt before joining Courage at the mighty (but now closed) Berkshire Brewery. She left Courage to get an MBA and eventually Maiden Brew hit the local pubs in 1998. Sara was the Beer Writers Brewer of the Year in 2012 where some 23% of the Writers members are women.

Sara has since been joined on the awards list by innovators Sophie de Ronde (Burntmill), Jenn Merrick (then at Beavertown and now her own Earth Station) and Jaega Wise from Wild Card. Jaega studied engineering and wondered why only the oil and pharma companies came to her college to try to recruit graduates! 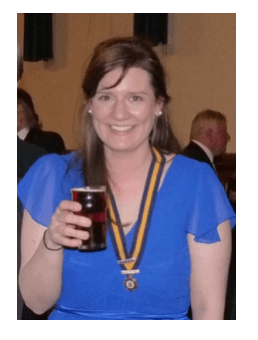 The All Party Parliamentary Beer Group makes a similar award assisted by the Institute of Brewing and Distilling. They also honoured Sara Barton in 2018 after Emma Gilleland from Marstons in 2014 and Jane Kershaw (pictured right) who is the great great great granddaughter of the founder of Joseph Holt in Manchester last year. Incidentally 22% of the IBD members under 40 are female and only 10% of those over 40 indicating that considerable strides are being made by the younger cohort. 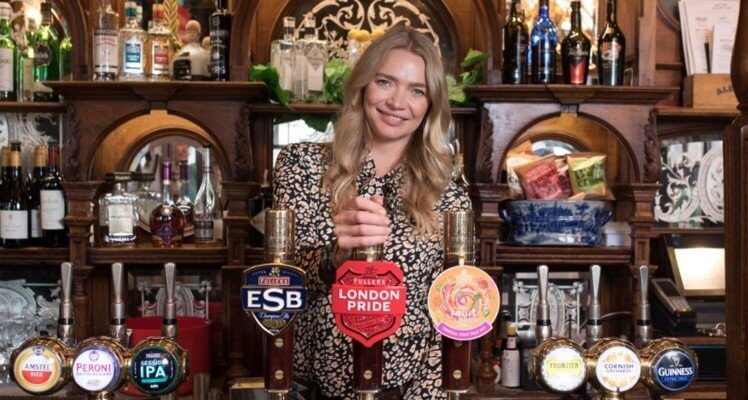 The APPBG Drinker of the Year in 2019 was model, racing driver, TV presenter, Strictly competitor, Master Chef finalist and now pub landlady Jodie Kidd (left). She followed Four Wedding’s Anna Chancellor way back in 1996, Cathy Price who visited all 656 of Britain’s pubs named the Red Lion (2016) and Candice Brown from Bake Off in 2018. Women are clearly getting a larger share of the awards as time goes forward.

In 2011 Sara Barton started Project Venus, an initiative encouraging collaboration between female brewers and promoting beer to women drinkers.  The group have met 19 times since then to brew a whole range of beer styles at events hosted by female brewers around the country, who choose the style to be produced. Its website lists 14 breweries.

These ladies are also involved in the International Women’s Collaboration Brew Day, which is held annually around International Women’s Day on 8th March. In 2014, Venus member, Sophie de Ronde, reached out to America’s Pink Boots Society to organise a global day. The aim was for women who are passionate about beer to get together, brew and establish enduring networks amongst this growing sorority. 60 women took part in the first brew called Unite. This month will see the seventh outing of this initiative with at least Hawkshead in Cumbria and Burnt Mill in Suffolk, brewing a beer designed as a tribute to an inspiring individual or, a beer ‘that made you fall in love with what we do’.

The Pink Boots Society has 90 chapters throughout the world but mainly in the USA. It was founded in 2007 by Teri Fahrendorf from Steelhead Brewery in Oregon, who took time off to go on a world trip and participated in 38 brewings, which helped her realise that many of the women brewers she met did not even know there were other women in their profession! Teri claims there is no glass ceiling in brewing, but there is an exception in the brewery education system, so the PBS, now with 1900 members, aims to provide scholarships so that women in the industry can learn more about the science and technology behind the business. . 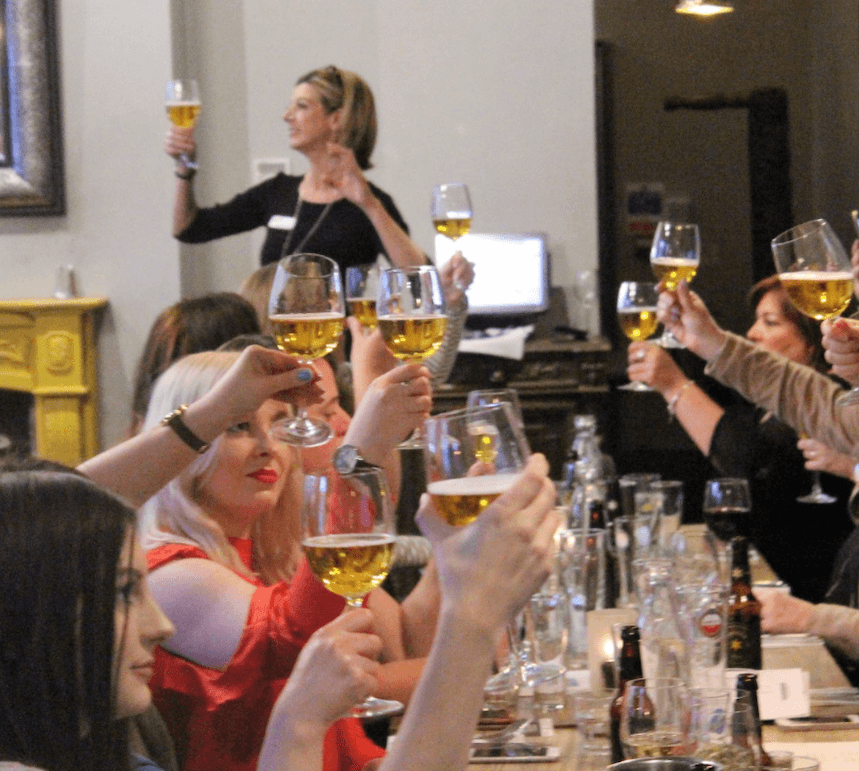 Teri also found time to launch Barley’s Angels, again with chapters across the country which focuses on expanding the knowledge and appreciation of beer amongst women. In the UK, Dea Latis, named after the Celtic goddess of beer and water, is a group of women united in their passion for beer and a belief that it’s far too good to be enjoyed only by men! Listing some 240 female brewers or brewery owners, they encourage women to choose beer as a drink of choice.

Following on from Edinburgh’s Beer Without Beards and Ladies That Beer in Liverpool, a group of Lancashire women have set up their own group. Members of the Preston Beer Girls meet monthly in the city to plan events, compare tasting notes and share their beer knowledge. Not content with merely sampling beer, they have just created their own brew called ‘Jeans and a Nice Hop’ at Farm Yard Ales in Cockerham. The beer is a 4.5% New England IPA using a new experimental hop from the US called HBC 431.

Back over in the States, Ginger Johnson has Women Enjoying Beer which has morphed into a consultancy advising companies on how to market beers to 50% of the population. She has a book subtitled, ‘Do not sell me a pink hammer’ and says that ‘It is not about pinkifying – that’s pandering. It’s about acknowledging, with full respect, that you want female beer drinkers to be your customers. So it’s time for beer makers to retire the old sexist and juvenile jokes and get serious about beer and women. If they don’t, they’re missing a huge opportunity’.

According to YouGov, only 17% of UK women regularly drink beer. Dea Latis reveals that women would switch to beer if it wasn’t associated with pints, bloating and sexist imagery. There are some deep-seated beliefs and perceptions about beer that will take a lot of effort to shift. They urge more elegance, better glassware and a premium serve. Women do not want a beer made for women. Women just want the beer and pub industry to look at things from their perspective and consider how beer is presented and positioned to them.

American management guru Shannon Eckroth observes that it is no harder being female than male and hard work knows no gender. “Be empowered by results and get fuelled by your potential” she says.