How is Sparkling Wine Produced?

There is a perception that wine makes itself. You crush the grapes, the yeast is on the surface of the skins, you put the juice into casks and hey presto. If you are making Beaujolais Nouveau you may only have six weeks as the rush to market starts on the third Thursday of November! 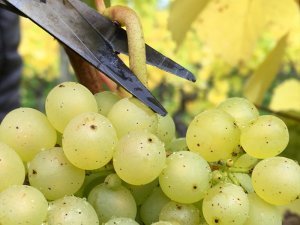 Others have images of roistering peasants staggering about in shallow wooden or stone troughs treading the grapes. No doubt this still goes on as part of an end of harvest party for the estate workers. At the Kokopelli Winery, Arizona’s largest, they have competitions open to the public to see how much juice a team of two can extract in two minutes. Then there are large wooden casks and lots of cobwebs in our view of a traditional winery. But if the truth be told it is mainly stainless steel today. Hard work by humans with a lot of passion has given way to scientific knowledge, hygienic principles but still with plenty of passion.

One area which automation cannot replace is the early season pruning and training of the vines to ensure the right balance of vegetative growth in the canopy to support next year’s grapes and the right number of clusters so the plant can mature each one properly. At 1000 vines per acre, each acre takes about 50 man hours of pruning. The number of vines per acre obviously depends on how far apart you plant them. In northern climes where sunshine might be in short supply, they will be four foot apart with ten foot between the rows which give 1000/acre, Four foot rows increases that to 2700.

Then in the summer, fruitless spurs can be cut back and the clusters reduced to 4-6 per stem. So most of the day-to-day work throughout the year consists of nurturing the vines and protecting the grapes against pests. The grapes begin to form in July and develop through August and September, ready to be harvested when ripe in October. The point of harvest is determined by refractometer and pH meter, so that the correct balance of alcohol content and acidity, so important for white wine quality, is attained. 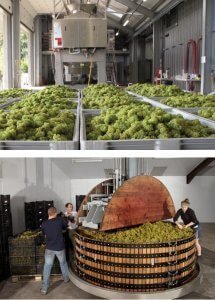 The magnificent Coquard press at Wiston

When the clusters are ready, more roistering peasants (vendangeurs) may have been replaced with a mechanical picker which will strip the vines by vibration. Some sophisticated machines will also crush the grapes and hold the must in a chilled tank before transfer to the winery. Machines can work at night when temperatures are lower and steadier which is said to lead to a more consistent wine.

A pneumatic press from Bucher

Speed is of the essence if you are making a white wine from the three noble champagne grapes as only Chardonnay has a white skin. Operations need to be gentle as well to reduce any leaching of skin colour into the must. Many wineries use basket presses where a hydraulic or manually operated plunger presses on top of the grapes. There is a superb Coquard press at Wiston in West Sussex, England’s only one. This is a huge basket press with an equally massive plunger, the grapes need raking from the periphery to the centre to get maximum extraction so there is some heavy manual work still involved. Less impressive is the pneumatic press where a large revolving cylinder with an internal diaphragm presses the grapes against a mesh around the periphery. Some wineries use the Bucher press which we saw making apple juice where a giant piston which crushes them and the juice flows to internal porous flexible pipes for collection.

There is no need to remove the stalks for white wine making and they provide a useful filter medium for the emerging must (grape juice). This must will be settled or centrifuged of any residues which might otherwise leach unwanted compounds into the wine. The spent skins and stalk will be fermented and distilled to make marc or else industrial alcohol. For red wines, the skins are removed after fermentation but the stalks need to be removed beforehand so that no undesirables find their way into the fermenting wine.

Today’s wine makers to do not rely on yeast on the grape skins but use dried yeast which has to be rehydrated carefully to ensure maximum viability. Fermentation takes place in stainless tanks at a controlled temperature. Fresh yeast will be used for every batch. Red wines are fermented at higher temperatures than white and some whites will ferment at 15oC which checks the metabolism of wild yeasts coming in with the grapes and still has adequate levels of esters etc as volatiles are not lost by evaporation. Some winemakers will treat the must before fermentation with SO2 (perhaps 100ppm) to control wild yeast levels but pitching with viable yeast cells and keeping the temperature low will control with a lower sulphite addition. 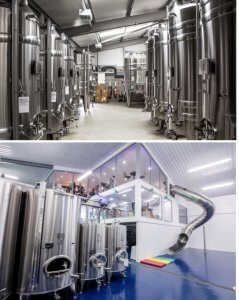 First runnings of juice are of higher quality (cuvée) than the later, more intensely pressed juice (tailles) and may be separated and fermented on its own. The juice contains almost exclusively monosaccharides and so the yeast is able to ferment it to completion with a final gravity well below 1.000 and any sweetening is made by the addition of sterile must when fermentation has been completed or, in the case of sparkling wines, in the bottle after disgorging. White wines generally undergo no malo-lactic secondary fermentation (bacterial conversion of the harsh malic acid found in grapes to the smoother lactic acid.

Sparkling wine is made in a similar way to bottle conditioned beer, including initial storage under a crown cork, but sparkling wines are kept in storage for much longer (minimum of 9 months by law) to develop up to 6 bar pressure of CO2 from the addition of 18g/L of priming sugar. Unlike bottled conditioned beer, which is served with the yeast still in the bottle the sediment is removed from sparkling wines. After perhaps two years in bottle, they are rotated and tilted daily until they are fully inverted and the yeast settles into the neck of the bottle. This is done automatically with up to 500 bottles packed tightly into gyropallets which have been around since 1968 and gently coax the sediment down into the neck without human intervention.

Disgorging is definitely not a summer activity. If possible the pallet should be moved into a chilled store at 2oC to reduce the bottle pressure and thus losses. If you are doing this my hand, you are still going to lose some 30mL per bottle. The neck is frozen by placing the inverted bottle in a bath of -25oC glycol which holds perhaps 48 bottles. Freezing takes a few minutes so the other half of the bath can be emptied and refilled while you are waiting. Then you ease the crown cap and direct the slug of ice into a bucket. Put your thumb over the aperture and offer the bottle up into a pressurised topping up device called the dosage unit which blows a small amount of sweetening sugar into the wine and tops the bottle up. The bottle is quickly passed into the corking machine and immediately to the cager. 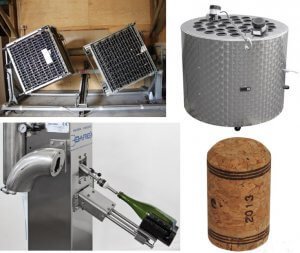 Gyropallets at Camel Valley in Cornwall, a neck freezing bath and a Barid dosage unit showing the crown cap remover directed downwards into a bucket on the left and a cork before insertion.

You might think a virgin cork would already be mushroom shaped but it is 31mm wide cylinder of agglomerated cork grains. The machine compresses the cork and inserts it only part way into the bottle. The cork expands to seal the container neck but the top expands back to the original diameter moulded by the addition of a wire cage called a muselet. The machine twists the wire tightly below the neck of the bottle to hold everything together. Of course larger wineries have in line equipment to do all this automatically. The whole operation of bottle conditioning etc is called the methode champenoise but only in France where the term is registered so the Brits have to call it methode traditionelle.