How To Brew Beer – The Rest Of The Brewhouse 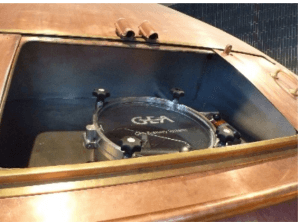 Last month we had extracted the sweet wort from the spent grains. Now we have to boil with hops to make hopped wort and separate out the solids before fermentation. Remember we are on the lookout for any additives or processing aids, as the brewer prefers to call them, being used in the operations.

The boiling vessel is called a kettle in most parts of the world but the Brits persist in calling it a copper after the original material of manufacture. Today stainless steel rules although you will see copper outer shells which help promote a more traditional image in a modern brewery. 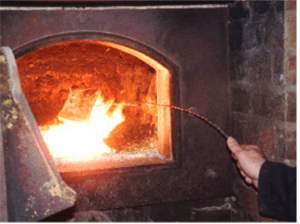 Kettles would originally have been fired directly with coal or latterly gas but to prevent charring on the bottom as the liquid was emptied, steam heated calandria were placed inside doing away with a lot of hard, hot manual work. You cannot start boiling until the heating surface is covered so modern kettles usually have external calandria at a lower level or even horizontal to get on the boil earlier and reduce the overall time spent in the vessel. It is possible to clean the external calandria while the kettle is filling but I have never met anyone brave enough to try it! 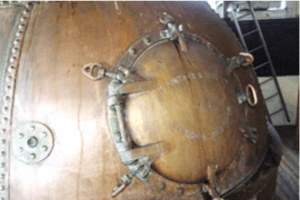 A venerable kettle beaten from sheet copper, rivetted and soldered together

Steam is still the usual heating medium but there are smaller installations passing flue gases from a gas burner while hot water under pressure is popular in Europe. Mineral oil does offer some economies over steam but most breweries will need to generate steam for other operations so keep using it for wort boiling.

Today hops are generally powdered and pressed into pellets using the presence of the hop oils to help them stick together. The finer material helps the utilisation of the hop bitterness and the pellets can be packaged under an atmosphere of nitrogen which stops oxidation processes and allows ambient storage. In the old days, brewers would pay for expensive cold storage off site and only bring a working stock forward. Now the only cold storage is at the hop powder makers and they mill the hops as quickly as they can.

Hop pellets on the left, hop ‘pots’ at Aying in Germany to facilitate addition to the kettle and a good vigorous boil courtesy of Krones Stromboli internal calandria

The kettles at Miller (Molson Coors) in Milwaukee

The boil would last for around three quarters of an hour but meanwhile all the hop oils would simply go up the chimney and be lost. Hop aroma is a major consideration in today’s beers so to retain oils, hops of ‘aroma’ varieties would be added late and the kettle emptied as soon as they were dispersed.

The boil needs to be vigorous. There are too many micro brewers out there who are struggling with electric immersion coils and the wort barely simmers and you can taste the effects. Wort evaporation is expensive and brewers trying levels below 4% will have some sort of wort stripping device downstream to remove the unwanted volatiles which simmering leaves behind. Energy will be recovered from the kettle vapour through condensers in the stack. 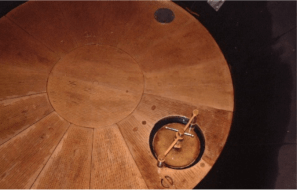 Hop back plates in the old Adnam’s brewhouse

Before hops were milled, when beers were more bitter than they are now and the hops themselves had lower bitterness potential; the kettle contents were ‘cast’ to a hop back which had a slotted bottom like the old mash tun. The bed would be 1-2 feet deep and this acted as a filter bed to clarify the wort of precipitated proteins.

Nowadays, the wort passes tangentially into a whirlpool. Late hops may be added here and the wort cast on top of them. A lot of brewers will cool the wort to 85oC on the way which collects valuable hot water which can be used to flash up the lauter tun wort at 78oC to boiling on its way for the next boil. This temperature reduction is also key in arresting the formation of one of those unwanted volatiles, dimethyl sulphide which can give pale lagers a sweet corn aroma. 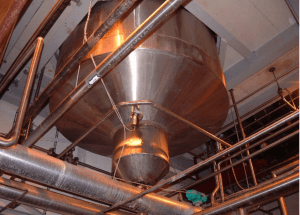 The circular motion in the whirlpool encourages the formation of a cone of hop and protein material on the base rather like whizzing sand around in your bucket when you were little and at the seaside. Protein molecules are themselves encouraged to form larger particles by the addition of kettle finings which are processed from particular seaweeds. The proteins tend to have a positive electro static charge and the seaweed is negative and hey presto!

UK brewers have long valued bright worts so that protein is removed which saves having to remove it later as hazes are not desirable in the finished glass of beer. It is also said that protein going forward can coat the yeast cell making it more difficult for it to operate efficiently. That does not stop one German brewery manufacturer making a virtue of rapidly produced cloudy worts saying they contain valuable yeast nutrients and we know a lot more about how to remove potential beer hazes downstream! 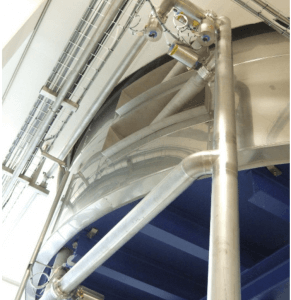 Differential run off points from a whirlpool

Whirlpools will have draw-off points down the side of the vessel to be used successively as the wort clarifies below thus reducing overall residence time. Once emptied the ‘trub’ cone is removed by spraying it with hot water and it is pumped to the spent grain tank for disposal.

It is possible to feed the wort from the boiler into the kettle tangentially and so use it as a combined kettle and whirlpool which can save space, capital cost but will slow throughput as you cannot start to refill for the next boil until all the wort has been chilled for fermentation.

The next stage in the process is cooling the wort and fermenting it.

A modern kettle at Oetinger in Germany where the vapour is fed to an energy recovery device. The centre shows an external calandria. On the right is the combined kettle and whirlpool at Banks’s in Wolverhampton