How To Make Beer – Fermentation 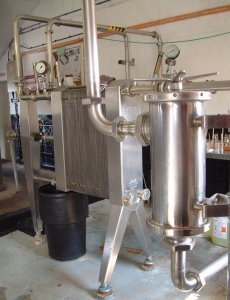 Wort is cooled through a plate heat exchanger. This one is fitted with a hop strainer to ensure no hop seeds can block the flow.

Last time we left the now bitter wort in whirlpool but still at 85oC. This residual energy is recovered in plate heat exchangers as ale worts are collected at 18-20oC and lagers at 11 -15oC. Lagers are fermented cooler which allows more of the flavours derived from the materials to show through compared to higher fermentation temperatures which yield fruity estery notes in ales. 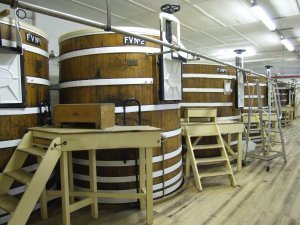 Wooden fermentation vessels now with polypropylene inners. The sluice gate allows the yeast to be removed from the top surface.

Ale and lager yeasts are taxonomically different. Lager strains are a hybrid of the ale yeast with the genome of another yeast which was found recently in the wild over in Patagonia. If lager brewing has been around for half a millennium, boffins are at a loss to explain how the hybridisation originally took place. Further research has found it in Europe so the current thinking is that it came down the Silk Road from Asia.

In a shallow fermenting vessel, the lager yeast will sink to the bottom while the ale strain rises to the surface where it can be collected by skimming. Hence lager yeast is known as bottom fermenting or bottom cropping while ale is top fermenting or top cropping. With today’s deep fermenters, this distinction is superfluous as neither comes to the top. Evolving bubbles of CO2 gas get too large as they rise through the liquid to effectively carry the yeast to the surface even if it wanted to go! Some modern fermenters are very large, so large that they are fabricated on site, the world’s biggest brewery at Constellation’s Piedras Negras plant in Mexico (below, right) has 10,000hL vessels which need a large brewhouse to fill them quickly. 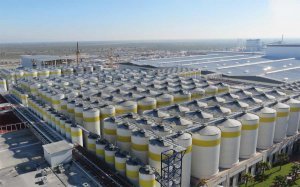 Old copper brewing vessels had soldered joints and were a source of zinc, an essential mineral for the yeast cell as well as you and me. So we now add a small amount before fermentation, only 0.2ppm. As the brewer wants to fill his vessels as much as possible, he might add silicone based food grade antifoam at the same time. This is removed on filtration so protecting the foam in your glass. Brewers of cask beer which is not filtered should beware. 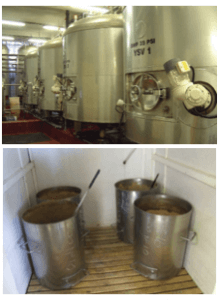 Yeast storage in cold tanks (above) and in buckets in a chilled room.

Yeast needs oxygen to allow it to build cell walls ready for cell multiplication. This is the only time that the brewer welcomes oxygen, any later ingress will lead to stale flavours in the finished beer. Aeration will give around 8ppm which is fine for traditional brewers but most of the bigger brands are ‘high gravity brewed’ meaning that the fermentation is carried out to say 7%ABV and post filtration it is diluted back to 4%ABV. The wort will then need to be oxygenated to around 15ppm from an oxygen cylinder or tank. There are obvious advantages of increasing capacity through fermentation, maturation and filtration. The fermentation conditions and materials need to be tuned to make sure the fermentation which will start at 1075o gravity does not produce unwanted estery flavours. As you will be adding 75hL of water to every 100hL of high gravity beer, the dilution water deaeration plant has to be effective to keep the oxygen out.

Top: This parachute device is lowered down into the yeast crop which then weirs over and is collected in a tank below. The centre shows conical bottomed vessels at Blandford Forum. A two stage yeast propagation plant with 8 and 25brl vessels at Camerons in Hartlepool.

The yeast for the brew will have been recovered from a previous batch and stored cold. Yeast can be ‘acid washed’ with phosphoric acid (pH2 at 2oC for two hours) to kill any contaminating bacteria before pitching into the wort. This should not be needed in the more hygienic plants of today.

At the peak of fermentation, each mL in a vessel might contain 80 million yeast cells so a 2000hL fermenter would contain 1.6 x 1016 cells so expect a mutation somewhere in that lot! For this reason yeast will be grown up under laboratory conditions from a few cells kept under liquid nitrogen at -196oC until there is enough to pitch a small brew. This way the yeast is changed every 4-10 generations. Of course trad UK ale brewers do not do this and have been repitching for thousands of generations relying on acid washing and crossed fingers. Even then their house yeast is most likely lodged with the National Collection which is based in Norwich and special micro labs would be able to grow up a replacement batch if needed. 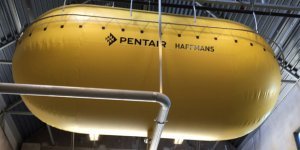 The gas collection balloon prior to scrubbing and compressing the CO2.

The fermentation process is exothermic so the fermenting wort gradually warms up. Temperatures are controlled by the circulation of coolant in jackets around the vessel. Ales will be checked at 22-23oC so that not too many fruity toffee flavours finish up in the beer. A lager would rise to 15oC again to limit the flavours of fermentation. There are exceptions of course but I do not have time to go into the technology of allowing at least one of England’s best selling lagers reaching 20oC! Higher temperatures mean faster fermentations so an ale fermentation would be finished after three days and a lager one in ten.

More and more brewers are collecting the CO2 evolved for use later in the process. A couple of years ago, there were shortages as purchased gas was a byproduct of making agricultural fertilizer and two major European plants were shut down when they had made enough for the farmers. Tennent’s in Glasgow spent £2.7m on a system so it is not a cheap option but it gives a rosy feeling that you have saved 4 tonnes of CO2 going into the atmosphere for each 2000hL fermentation. 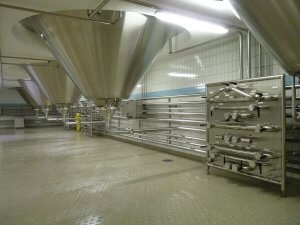 More conical bottoms, this time at the Staatsbrauerei Rothaus in the Black Forest. Vessels are hard piped to changeover panels.

Now we have ‘green beer’ and there are still some raw flavours about, notably butterscotch (diacetyl), green apples (acetaldehyde) and the dreaded sulphidic ‘Burton snatch’. At the peak fermentation temperature there is enough yeast in suspension to metabolise these unwanted compounds so that cooling is delayed for 24 hours. The cooling stops all metabolism and encourages the yeast to collect at the base of the fermenter. Modern vessels have conical bottoms which makes yeast removal easy with a very distinct change in appearance between yeast and beer. This can be detected by instruments which saves an operator having to be present to watch out for it himself. The fermentation will yield four times more yeast than it started off with. The excess goes to make yeast extract, vitamin B pills, it is fed to pigs who love it or else goes to the anaerobic digestion plant.

Some of you will be thinking what about the dropping system, Burton unions and Yorkshire squares? These time-served systems all aim to remove yeast towards the end of fermentation. Dropping fermenting wort into shallower vessels after 36 hours will encourage sedimentation, it also leaves a lot of protein behind and gives the brew some useful aeration in the process. Burton unions separate a yeast which does not sediment well in a six inch depth in the top trough while the Yorkshire square traps yeast foaming up on to an upper floor of the fermenter.

The end of fermentation leaves us with a vessel of cold beer, still with a fair amount of suspended yeast present. The next step is maturation, filtration and packaging. For additive spotters we have added zinc sulphate from a bottle sold by Roche and food grade antifoam. Will there be more?

The Burton Union Room at Marstons at Burton (left), the old dropping system at Brakspears with shallow vessels below the collection FV and (right) cropping yeast from a Yorkshire square which is round at Black Sheep in Masham.