How To Make Beer – On To Packaging And The Warehouse 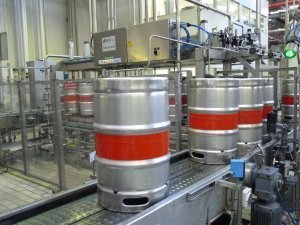 Some 41.1% of UK beer is packaged for draught dispense in the pub (6.6% in cask and 34.5% in keg), bottles make up 24.6% and cans 34.3%. These figures are from 2019 and it remains to be seen whether our Covid experiences will alter the pack type spectrum once things get back to normal. While we are looking at statistics you might like to know that the total UK market is worth just over 46mhL and over 77% of it is lager. 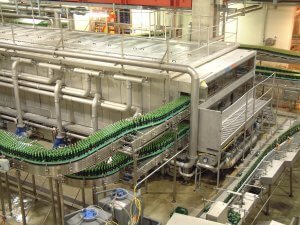 The aim of packaging is to keep the oxygen out, keep the carbon dioxide in, fill to the correct level and seal, all in a microbiologically sound environment, then label and collate ready for transfer to the marketplace. Packaging of course plays an important role in product attractiveness on the supermarket shelf.

Our beer is now in bright beer tank where final QC checks take place prior to transfer to the packaging lines. The beer is not yet microbiologically stable; however clean the upstream plant may be, it only takes one Lactobacillus cell to turn a 100L keg sour. Beer for kegging is pasteurised through a plate heat exchanger with a length of insulated pipe outside the unit which will hold the beer at around 75oC for 20 seconds before cooling again into a sterile beer tank. From now on the pipework and the filling machinery needs to be scrupulously clean and sterile. This high temperature short time or ‘flash’ pasteurisation is energy intensive and demands that oxygen is kept out as heat accelerates staling reactions. Brewers are now turning to cold sterile filtration to stabilise the beer through membranes with a specific 0.45µ pore size to trap bacteria.

Pasteurisation for small pack bottles and cans has in the past employed long tunnels through which the sealed containers pass while being gradually heated up to 60oC using water sprays, then held at that temperature for perhaps 20 minutes before cooling again. Note the lower temperature and longer time compared to the plate heat exchanger method. If this process takes around one hour, at today’s filling speeds these pasteurisers have to be large and many are double decked to save floor space.

Again sterile filtration before packaging is possible followed by aseptic filling possibly in a slightly pressured sterile cabinet but the brewer needs to be sure that the bottles and cans are completely sterile before filling and do not forget the can ends and bottle caps. The capital cost of such sterile filling is likely to be some 10% higher than tunnel pasteurisation but cheaper to run as lower energy input is required.

A bottle washer and the compressed label pellets for disposal

Bottles and cans come off the manufacturer’s line sterile but storage and delivery needs to be rigorous to avoid any contamination of the empties. Breweries do not store empty cans and bottles, they will be delivered from the supplier on live bed trailers throughout the day and night, perhaps one every forty minutes at the larger plants.

There is only one brewer in the UK still handling returnable bottles. Harveys of Lewes use a 275mL adaptation of the old London half pint and MD Miles Jenner reports that a number of folk have come visiting to find out whether returnable bottles could make a come back. These demand a bottle washer which can be almost as large as a tunnel pasteuriser. 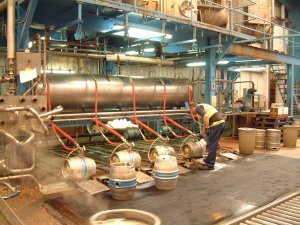 Returnables in the UK disappeared as multiple retailers refused to handle them and return customers’ deposits. Plans for UK deposits to encourage recycling have been put back to 2023. The German authorities were stricter with the supermarkets and the returnable system still operates there although it is coughing a bit as brand owners seek to introduce novel sizes and embossing to help shelf stand out.

Kegs and casks are returned from trade for refilling. The exterior will be washed and old labels removed. Any beer residues will be recovered and containers are then washed with detergent and steamed to raise the internal temperature to 105oC for sterilisation. Many of today’s cask beers are very hoppy, luckily the brewers are increasingly adding late hops to the whirlpool rather than dry hopping in cask which can add further difficulties to getting them out again as the cask returns.

We now have the beer and we have the containers to fill. We can now consider the filling and transfer to the warehouse prior to sale. Each pack type is slightly different.

After washing the cask, the tap aperture is sealed with a new ‘keystone’. As the casks cool, air is drawn in so the whole area should be clean to avoid contamination. The casks are filled under atmospheric pressure perhaps using a peristaltic pump to meter the exact volume or filled to holes in the top of a filling tube inserted for each size of container. Brim filling can be more wasteful. Isinglass finings can be metered into the beer flow. The filling aperture is sealed, usually with plastic rather than a wooden bung these days. Casks will be placed on pallets by hand or robot and transferred into warehouse. The warehouse area for cask beer should be around 10oC as we are expecting the yeast to commence secondary fermentation to build up ‘condition’ in the cask. Ideally all delivery vehicles should be attemperated during the summer to avoid excess build-up of CO2. Certainly no drays should be preloaded on a Friday afternoon for Monday delivery during warm weather.

Keg lines can be linear with the residue recovery, detergent washing, steaming and gas purging and then filling stations taking place in a series of four or five heads over perhaps 26 lanes. Kegs are usually washed and filled upside down when drainage is better thus making the operation faster. The lanes are situated at right angles to the infeed and outfeed conveyors. This is probably the lane limit as any longer and there are logistic problems getting the empty kegs into the machine, the fulls off and indeed keeping a lengthy beer line at a constant pressure so that lane 1 washes and fills at the same rate as lane 26. These lines can produce 1200 kegs per hour.

Labels are applied and a cap placed over the filling aperture with a tamperproof seal. After check weighing, the kegs are placed on pallets by robots often sideways on yokes which are more stable. Another arrangement is the locator board where kegs are collated into vertical groups, separated by plastic boards specific for each size and the fork lift truck has clamps to grip the bottom group to move the stack.

The other type of keg line is rotary with a washing unit of perhaps 24 heads feeding a racking unit of 12-16 heads. These machines can work faster up to 2000 kegs per hour but if one head jams the whole output stops and they are less efficient with numerous size and beer quality changes.

Bottles and can filling are very similar. The most important machine is the filler and the equipment before the filler must keep it stuffed and those downstream keep it clear to ensure interrupted filling. Fillers are rotary devices with multiple heads, the largest can machines are over 5m in diameter which puts a strain on bearing designers. 2200 cans per minute is about the limit as each can has to be purged of air and filled to the required level without loss or pick up of oxygen. This takes a specific time so only more heads per filler can increase output and that increases the diameter of the machine. Cans are flimsy without ends or beer so cannot be purged by a vacuum as bottles can. Aseptic filling demands a chamber around the filler/crowner or filler/seamer which is supplied with sterile air at the higher pressure than the packaging hall. Similarly the empties conveyors are covered to prevent ingress of unwanted contaminants.

Bottle intake; bottle caps in bulk: a bottle labeller and a can palletiser

Straight after filling the bottle is jetted with a stream of sterile water to ensure there is fobbing up to the top of the neck before the closure is applied. This is usually a crown cap which was invented back in 1892 or a twist off crown which is the same but with a lubricating layer while rip off tops are popular in the Antipodes. Next stop is the tunnel pasteuriser followed by an optical level check and then labelling. Shelf pull may demand a front, back and neck label. Some beers have foils to cover plain crowns and the whole activity is complicated by justifying the labels in line with bottle embossing. Trials have taken place directly printing label graphics on to bottles. 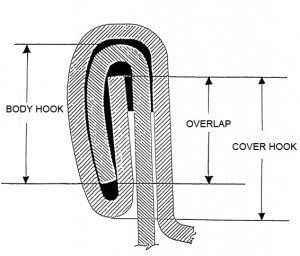 The can seam, note the five layers of metal and a good overlap which prevents leakage

After filling, cans are ‘undercover gassed’ where CO2 but more commonly nitrogen is fed into the gap between the can and the end coming down to meet it. The end is moulded on to the flange on the top of the can by a series of chucks. Cans are inverted before pasteurisation as the seam (now on the bottom) is the most likely point to leak. Levels used to be checked with γ radiation generated by rapidly decaying americium 241 but post 911 bureaucracy means that lower energy X rays are the norm today. 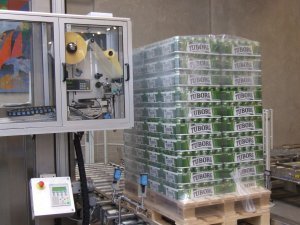 Coding the full pallets into the warehouse

Containers need to be blown dry before jetting a date stamp on to the base of the can, the bottle label or the bottle neck. They are then ready for collating into sales packs. There is a move away from plastic so a cardboard tray of 24 bottles with shrinkwrap will be replaced with a paper wrap. Plastic Hicone webbing to group cans into four or six has given way to cardboard while Carlsberg sticks cans together with blobs of gum. Corona even screws cans together. Any number of cardboard box collations are possible in 4, 6, 8, 12, 24, 30 and double decked into even larger boxes. A Finnish brewery will sell you a full pallet of a thousand cans while thankfully 2.3m long boxes of 99 cans weighing 40kg remain the preserve of attention seeking smaller brewers.

The final job is palletising where boxes can be lightly stuck together with dollops of gum or else the whole pallet can be stretchwrapped for stability during transit. 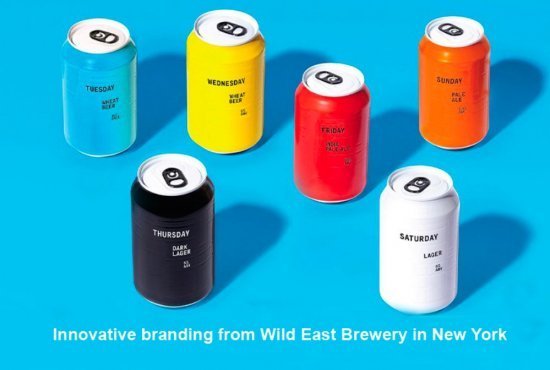 What Bugs Me About ‘Craft’…

…is that there is no definition, yet everyone reckons they know what it means! The term ‘craft beer’ is bandied about to denote small batch, local provenance, time served expert, quality, independence and generally better. It is also used as a stick to beat the multinationals whose brewers sit behind computer screens all day while […] 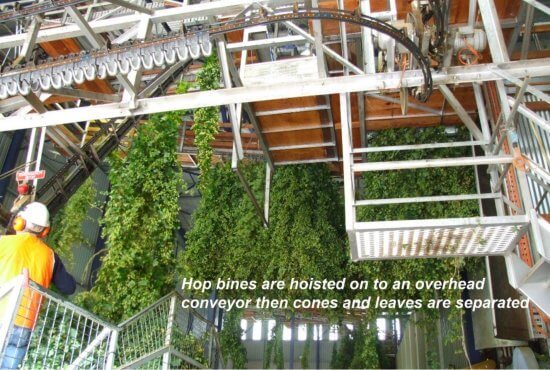 Hops The Spice Of Beer – Part 2

Plant breeding has centred on building in increased resin yield, disease resistance, exotic tropical and citrusy aromas as well as hedgerow varieties that grow to around 2.5m tall rather than the traditional 5-6m. However the hop plant does not breed true from seed, each seedling is unique in its genetic make-up which means a lot […] 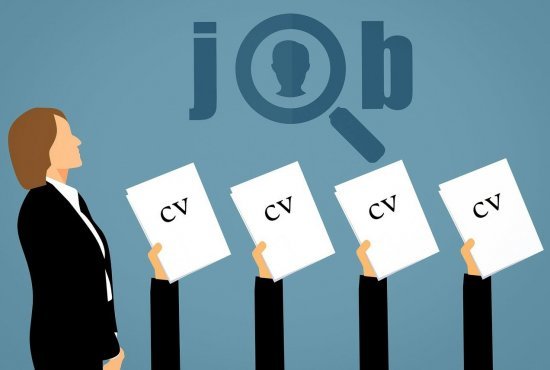 Tips For Writing A Technical CV

There are many good web sites for generic CV writing tips and formats…..but there are a few additional tips you may wish to consider if you are writing a technical CV. WHO IS READING THE CV? In many cases, HR may make the first screen of CVs and may not have a technical background. This […]