Is Rum Going To Be The Next Big Thing?

Rum has been going to be the ‘next big thing’ for the last few years once the gin market becomes totally saturated with new start distilleries. Rum is not as easy to produce as gin; you have to ferment a molasses base first before distillation. For gin you buy rectified spirit and add peels, barks, seeds, spices, fruits, flowers and hey presto! Perhaps these bullish projections come from the rum producers themselves but the evidence does show something of a slow burn in the right direction. 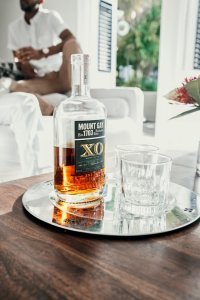 The global market is around 150m nine-litre cases and slowly rising. There is a premiumisation trend with age statements as long as 50 years and different cask expressions. Rum seems to be gaining ground as the basis for cocktails like piña colada, mojito and daiquiri. On the innovation front, William Grant has added a rum using discarded banana peel to add to its cascara variant made from the outer bits of a coffee berry. Sir Ranulph Fiennes has added his name to a range distilled with different woods from his travels including sequoia and date palms. Islay Ales plan a new brewery and distillery to produce Scotland’s first rum. There is even a white spiced rum from Silk Road and an Afro Caribbean blend from Barbados and Mauritius called Equiano. Halewood’s Dead Man’s Fingers hemp rum (with CBD) did not get past the advertising regulators!

In the UK, white rum is currently the most popular but pundits reckon that flavoured or spiced rums will knock that off the top spot by the end of the year. Retailer Whisky Exchange has tried to help customer clarification with a six strong classification expanding from the more usual white, golden and dark categories. Their 500 stock rums, where sales growth last summer outstripped gin for the first time, are now classed from a single distillery (pot, still, column still, mixed or modernist) and then multi distillery with traditionalist or modernist. Modernist is meant to be a positive term for the use of multi column stills. The cask and additional flavourings to make a rum go from golden to dark do lift the drinkers’ perceptions so how do you choose a darker one? Nevertheless according to the Wine and Spirit Association, rum sales surpassed £1bn in the UK for the first time in 2018 and flavoured rums have added over four million bottles in the last five years. 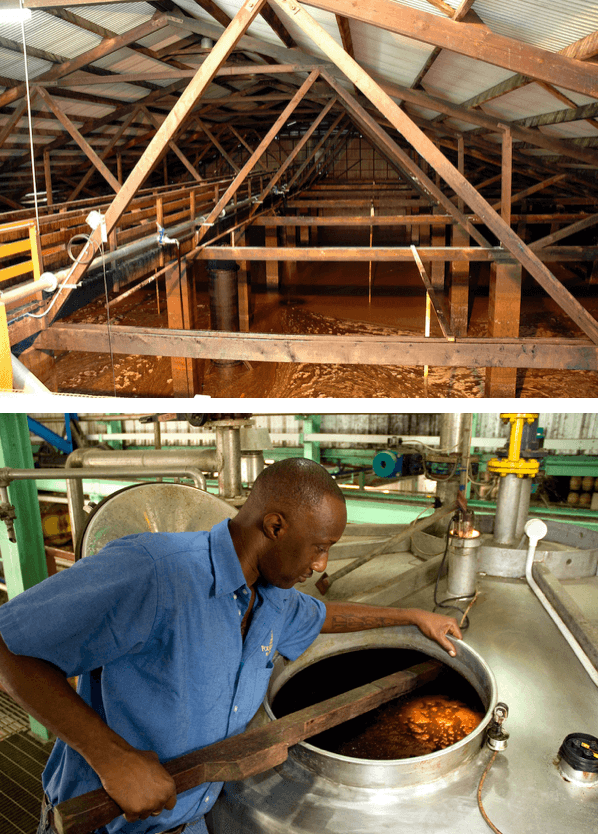 Rum is derived from sugar cane and is the only spirit sold in three colours, indeed the name ‘rum’ is said to stem from the botanical genus Saccharum. The cane is either in the form of raw pressed juice which has to be processed rapidly or else molasses which is a by-product of sugar refining and is shelf stable. Molasses is a popular and cheap substrate for spirit production in Asia so strictly speaking global top one hundred brands like Thai Beverages domestic budget Ruang Khao and Hong Tong (over 55m cases between them) would probably not grace the discerning mixologist’s top shelf. Nor perhaps would Philippines’ Tanduay and India’s McDowell’s No 1 or Contessa leaving Bacardi at No 10, Diageo’s Captain Morgan at No 14 and Pernod Ricard’s Havana Club at No 46. You might also see Colombia’s Ron Medellin or Czechia’s Bozkov and Dominican Republic’s Ron Barcelo. Ron simply means ‘rum’ in Latin America.

Aficionados will make a distinction between the English style from Jamaica, Barbados and St Lucia, Rhum in the French style and usually made from sugar cane juice from Guadeloupe and Martinique and Ron from Spanish speaking Puerto Rico and Cuba. Add to that, Brazil has cachaça also made from sugar cane juice and popular as the base for a refreshing caipirinha with lime juice and sugar. Sugar is a prime agricultural product and suffers from the vagaries of an international market. If sugar extraction stops, the cane can still be used to make rum directly from crushed stalks as it was when Martinique succumbed to cheaper sugar from South America in the nineteenth century; today its Rhum Agricole is highly sought after. 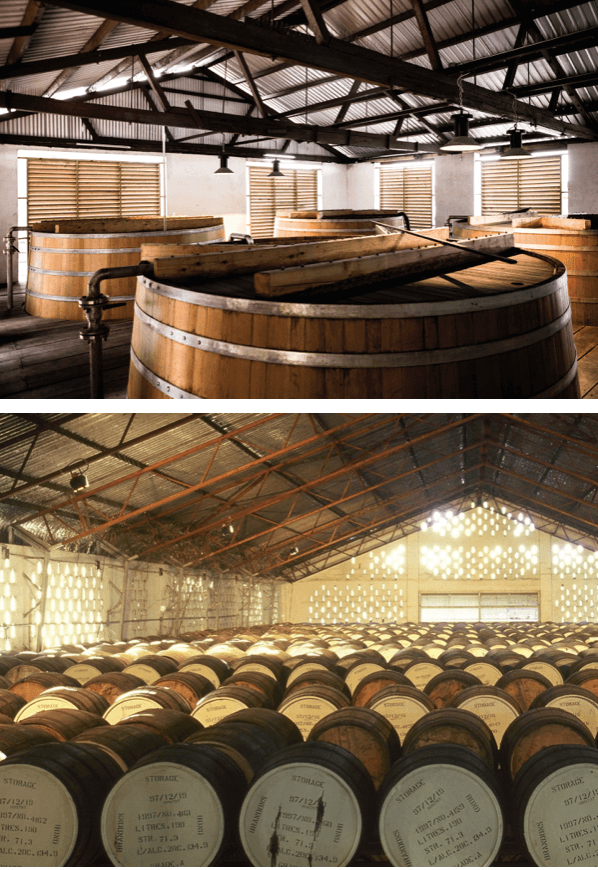 There is no globally recognised definition of rum, but nowhere can it be made from beet sugar. Even the four famous distilleries on Barbados are unable to agree on standards even when the government is willing to legislate to protect them with a Geographic Indication. The producers look enviously at the protection given to scotch whisky but there are 15 rum producing nations in the Caribbean and some do not want to be so tied that no innovation is possible. Each 100 tonnes of raw cane will yield 4-5 tonnes of molasses usually about 55% sugar but as the efficiency of the industrial evaporation and crystallisation process improves that will drop while the level of additives etc to improve sugar content will increase. One tonne of molasses will typically yield at least 250 litres of pure alcohol. 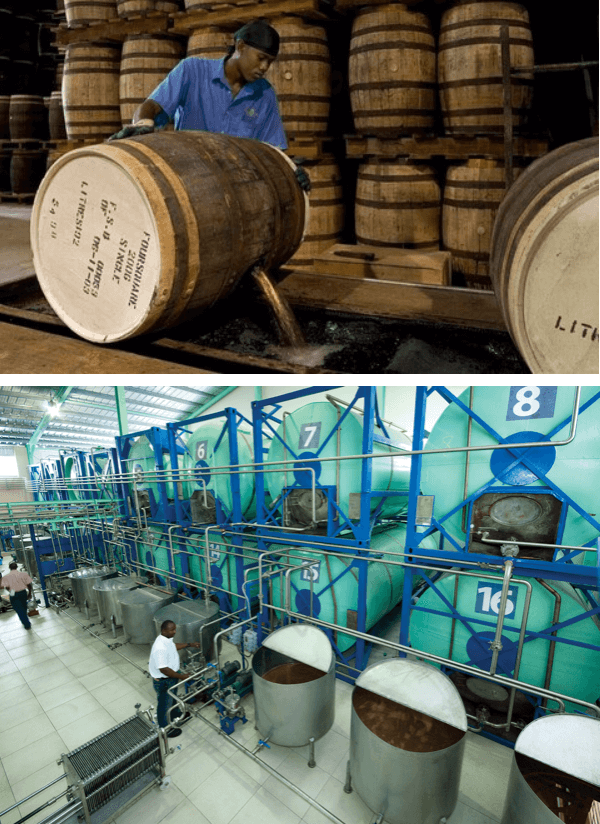 Emptying the casks and blending at Foursquare in Barbados

Often called blackstrap, these molasses are effectively sugar mill waste and are normally delivered hot to the distillery and needs cooling to below 45oC for storage to avoid further colouring reactions. For fermentation the sugar content will be adjusted to 16-20%Brix and added sulphuric acid will reduce the pH to around 4.5. Dried Saccharomyces cerevisiae is the usual yeast although S. bayanus may be employed with higher starting gravities. Fermentation is rapid in tropical climes with a top temperature of 30oC, the process is complete within 36 hours to around 7-9%ABV. A lot of suspended solids are derived from the molasses and the yeast so centrifugation is usually employed before distillation via trad pot stills, columns or any modernist apparatus.

A rum at 65%ABV would originally have been made by a double distillation as in making malt whisky but then the two retort system was developed in Jamaica to make 85% spirit in a single pass. Here the low wines at around 25%ABV are not cooled as in whisky making but kept hot with the vapour passing to a second retort where the ‘high wines’ are again distilled off to concentrate the product further. Column stills and Coffey continuous stills are used extensively to make lighter spirits. Spirit may then be matured in cask, usually second fill Bourbon casks from the States. Being made in hot sunny climes any reaction between spirit and barrel is going to happen more rapidly and the angels take more than their fair share so maturation times tend to be short and we do not suppose there was much left in the 50yo cask! 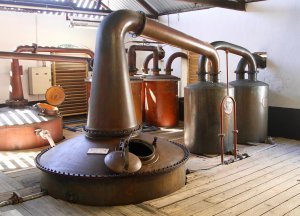 So rum is white off the stills but some may also be briefly aged to pick up casky flavours and then charcoal-filtered to regain the clarity. Longer maturation or no filtration gives a golden colour and more flavour from the cask while dark rums will be achieved by adding colours, sweeteners and flavourings, occasionally blackstrap itself. Spiced rum will be blended with an alcohol tincture containing coconut, cloves, cinnamon, all spice, star anise, vanilla and citrus peel which has been left for perhaps six months to infuse. You can of course do it faster. Pineapple or blackberries may also be used to add a bit of acidity. Big allspice and vanilla easily blend into simple cocktails and spiced can be nice on the rocks in the right situations.

Sugar cane is a topical plant so rum is a tropical spirit. Sugar cane was introduced into the Caribbean from the Canaries and rum was an early by-product from the sugar plantations. Admiral Penn brought some rum back after capturing Jamaica in 1655 and a link with the Royal Navy was established which lasted until the daily ration of grog for sailors was discontinued in 1970. Rum was only issued on the Caribbean station until the late 1700s but then spread to the whole fleet as rum would last a lot longer than beer on lengthy voyages.

So while Britain has a long tradition in importing rum it does not have much of a history in actually making it, so good luck to Salcombe Distilling which has a 42%ABV Wolf Rock rum, fermented in Devon from an imported IBC of molasses, English Spirit has its Old Salt and Spirit Masters makes Glorious Revolution. BrewDog has Five Hundred Cuts, nothing to do with lashes from a cat o’nine tails on the Spanish Main but Aberdonian heroine Elizabeth Blackwell who produced 500 wood cuts to illustrate her book on herbal medicine back in 1734. She used the proceeds to get her husband out of debtors’ prison. There will be other UK makers of course but product descriptions are often unclear about whether the spirit was imported and enhanced here.

Thanks to Green Engineering for the Foursquare photos and Mount Gay’s comprehensive website.