Sustainability – How Is The Drinks Industry Doing?

Sustainability is a huge subject encompassing the effects which industrial activity has on the local and global environment. It is far too large a topic to cover in much detail in this blog of just over 1000 words, but here we go with a few of the issues and some innovative solutions.

Some of us change a few light bulbs and take a few bottles to the recycling tip and that’s us – done our bit for sustainability. Others are passionate and support the antics of Youth for Climate Action or Extinction Rebellion which aim to force governments into unrealistic targets which risk returning the world’s population of almost eight billion back to a preindustrial age. The answer must lay somewhere in between. 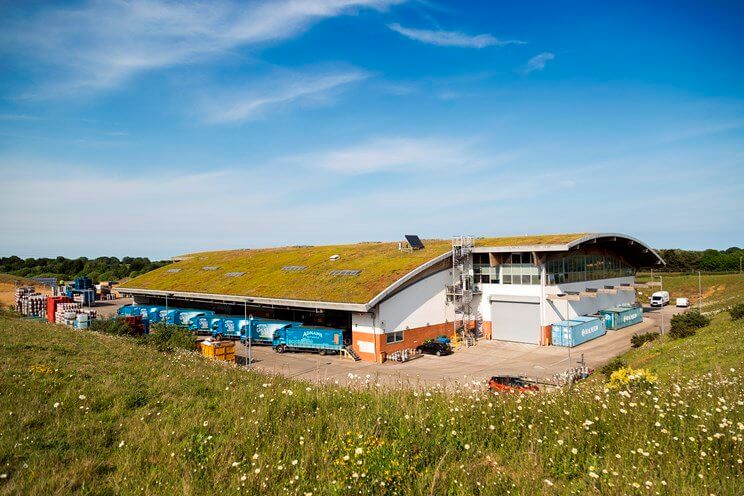 Adnams £6m distribution centre near Southwold with Britain’s biggest sedum roof plus rainwater collection, PV solar panels and built from lime, hemp and quarry waste blocks. Outside there is honeycomb Golpla paving made from recycled plastic for car parking.

Technology moves on at a pace and previously expensive eco-options like heat pumps, solar panels and wind turbines are becoming more affordable so our industry needs to keep up to date with best practice and not wait for somebody else to lead the way as it does look as if climate change is happening and as far as we know there is no more oil being made. Drinks producers today are very aware of importance of energy and water efficiency and carbon emissions. Profligate usage impacts the bottom line so there is a powerful incentive to reduce consumption.

Before looking for a capital spend, simple housekeeping can add up to significant savings in energy and resources by attending to leaks and overrunning hose pipes, switching plant off after use, using LED lights and motion sensors, attending to leaking steam traps and generally following operating procedures rigidly. Auditing, metering and reporting are key to seeing where wastage arises and implementation of ISO 50001 energy management systems will drive reductions. Comparisons are possible via NIRAS’ Brewery Benchmarking Club but the product mix of very few breweries is identical. Zero waste to landfill claims are common with income from recycling paying for the cost of waste separation. Carbon footprint and food miles calculations have been tried by some but they are far from an industry standard of performance.

After this low hanging fruit has been gathered, it is time to get the cheque book out. The making of beer has a roller coaster of temperatures; air is cooled to malt the barley, the green malt is kilned to gain colour and maltiness. Malt is delivered at ambient to the brewery and promptly raised to 60o odd for mashing and on to boiling point to extract the hop goodness. Then it is cooled for fermentation and refrigeration is needed to control this process and keep the beer cold during maturation. Pasteurisation raises the temperature again and then beer should be kept cool throughout the supply chain and into the pub cellar or supermarket shelf to maintain its shelf life. The brewhouse uses most thermal energy while processing uses the most electrical energy.

Modern brewhouses will recover much of this energy including heat recovery from kettle vapour but the spent grains still go out hot. Incidentally Queens University in Belfast has turned spent grains into activated carbon, others have tried to make biscuits. They can also be mixed with recycled plastic granules and made into garden furniture.

Many brewers will cool the wort into whirlpool at 85oC to recover high value energy which can be used to raise the temperature off the lauter tun towards boiling point. The biochemistry of the process demands certain temperatures but kettle evaporation can be cut back and a stripper incorporated to use a gas flow to remove unwanted wort volatiles instead of excess boiling. Sterile filtration will spare for expensive pasteurisation.

Some brewhouses are being designed without steam; hot water at 115oC will boil the wort without losses from condense traps and boiler blow downs. Continuous brewing plants use small rapid batches which save by spreading the demand for utilities and allow smaller pipe sizes again with rigorous heat recovery.

Brewers were shocked last year to find that their bulk CO2 supplies are subject to the vagaries of the agricultural fertiliser business. With two European plants shut down, supplies ran short. Each 2000hL fermentation vessel pumps some 4.5 tonnes of CO2 into the atmosphere, so recovery is in vogue again with Wellpark Brewery in Glasgow investing £2.6m. Youngs Henry’s in Australia is trying out absorbing CO2 into algae reactors. The green, literally, co-product can be incorporated into food, pharmaceuticals and bioplastics.

Krones has its Dynafill concept where bottle filling and crowning is done on the same unit saving flushing CO2 by 20% and allowing a fill at 30oC which means the incoming beer passes through a heat exchanger and yields useful chilling capacity for use elsewhere. A-BI has tried direct printing of ‘label’ designs on to bottles thus doing without the paper and getting designs into the marketplace faster. A-BI in Belgium has passed spent alcohol from making low alcohol products to Ecover for inclusion into its Too Good to Waste detergent.

Engineers are looking more and more at life time costs of owning equipment. Heat exchanger designers are now using more plates but with a higher coolant temperature; a higher initial cost but savings on day to day running.

Brewing with barley and enzymes sounds attractive but no one has made it work commercially yet.

Particularly in rural communities where many Scottish distilleries find themselves, waste heat can contribute useful symbiosis using low grade outputs for district heating, warming swimming pools and even fish farms. Passing spent grain and pot ale etc for anaerobic digestion to obtain boiler feed methane will save transportation of co-products over long distances. Cattle would then need feeding on soya products dragged from South America from fields which were once rain forest, but that is another calculation! 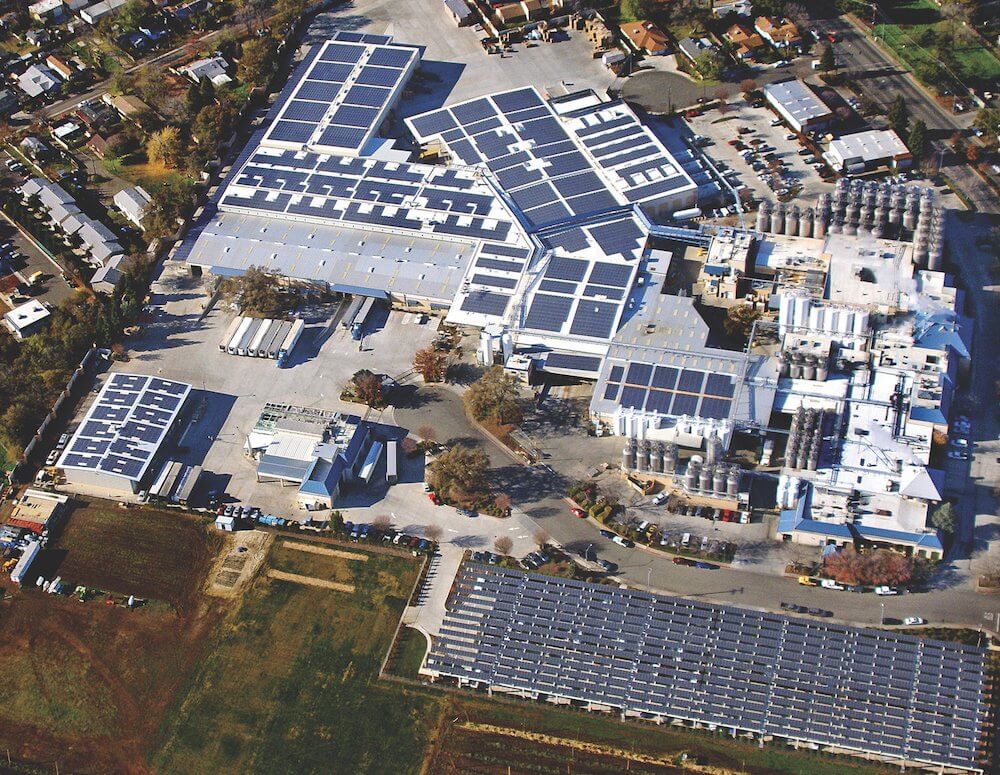 Bath Ales has 892 solar panels making 250kW for an investment of £150,000. A-B at Leuven has 2119 panels yielding 576kW and local residents have invested in the project and get 3% return over five years which is better than current savings returns. In California where it is usually sunnier, Sierra Nevada has covered all buildings and the car park with a total of 10571 panels. The car park array follows the sun round for maximum efficiency and keeps cars cool as well.

Many moons ago when brewers still had wooden casks to soak, the water usage would have been 11-15 hL per hL output. Today most brewers should be achieving 4hL and some are aiming towards just two. Mashing with treated brewery effluent is possible but the publicity might have an adverse effect on the brand image! The Head Brewer at Asahi’s Yatala plant near Brisbane told us that his recovered and ultrafiltered effluent is of better quality than the incoming town’s water from the local reservoir! Carlsberg at Fredericia in Denmark says its new plant will get the figure down to 1.4hL.

It is possible to brew without water. Black Cow vodka from Dorset uses waste whey from a local dairy and the Wild Beer Co down in Somerset has made a beer from it. William Grant has a vermouth called Discarded made from cascara which are the left over bits of the coffee fruit once the bean has been taken. Similarly use of waste which would otherwise be dumped involves Toast Ale using waste bread and misshapen crumpets to make beer. Foxhole Spirits collects waste marc from a number of UK wineries as a substrate as well as overage grapes from supermarkets. You could argue that rum has been sustainable for centuries as it is made from molasses.

A mix of consumer pressure and the chance of a marketing edge is seeing a move away from plastic in the final package. Work on using PET as a light weight non- returnable bottle for the future has stopped and Carlsberg is working to produce biodegradable cardboard versions. KHS has reintroduced paper wraps instead of plastic shrinkfilm to collate cans. The University of Strathclyde has a chitin based wrap made from prawn shells. Then there are any number of cardboard can collators to replace the plastic Hicone webbing which has been well reported as causing problems when animal life gets entrapped.

One trip KeyKegs are being collected in the North by the WDS One Circle initiative and turned back into new KeyKegs. Greene King has done away with plastic straws in its 1750 pubs but the polylactic acid compostable ones need to be separated for treatment. Will the supermarkets allow us to return to refillable glass but the embedded recycling culture may see them ending up in the wrong place! Lightweighting glass would have to end as returnables need to be more robust to cope with multitrips. Are consumers willing to pay more for sustainably produced beer?

A selection of non-plastic can collations from Carlsberg, Corona, Heineken and Grolsch

Perhaps the last word should go our old friends at BrewDog. Less maverick than they were, they are claiming the first carbon negative brewery in Aberdeenshire at a cost of £30m. It calculated its UK business pumped a very precise 49908 tonnes of CO2 into the atmosphere in 2019. The project includes a broadleaf forest on a 2000 acre site in the Highlands complete with sustainable camp site. With a slogan of Our Carbon, Our Problem, the brewery plans to power all its UK bars via wind turbines, waste beer is made into vodka, spent grains go for anaerobic digestion, there are three wind turbines generating 2.4MW on the hill behind the brewery and vehicles are moving over to electric only.

There are a lot of initiatives out there. Be imaginative, be brave, be first and do not wait for governments to impose rules on your business.