The Green Fairy is Back

We know that visitors to this website are adventurous but I wonder how many of you received a bottle of absinthe for Christmas. There is something mildly naughty and a tad trepidatious about first trying a drink that is supposed to drive you mad. Known as the Green Fairy we have intriguing stories from La Belle Epoque with its Bohemian goings-on in late nineteenth century Paris and a gruesome Swiss murder of a pregnant wife and two children in 1905 which led to absinthe being banned all over Europe. It was never outlawed in the UK but supplies dried up and the Brits never seemed to have made it themselves.

Until now that is and several artisan gin makers have turned their hands to a different set of botanicals. Even John McCarthy at the mighty Adnams had a go at distilling a red version for some unknown reason when absinthe is traditionally green or else colourless if you do not want to go to the time, trouble and expense of making it green. Kate Gregory and Helen Muncie at the Gin Kitchen in Dorking have a pinky one coloured with rose petals. William Grant has a Hendricks brand extension featuring its signature rose petals and cucumber, while Copper and Kings in the States is barrel aging it in juniper timber.

More traditional products come from Cornwall (Pocketful of Stones), Bristol by Psychopomp, Market Harborough by Two Birds, Manchester by Zymurgorium and in Scotland by Lost Loch on Deeside where you can book a six hour session to make your own. Loch Ness Spirits nearby even won Britain’s first gold medal beating 25 continental samples at the prestigious Absinthiades festival at Pontarlier in eastern France in 2018 with a blanche version. I am sure there are other producers amongst Britain’s many new gin distillers but remember that absinthe is not simply a green vodka and is really not for the inexperienced.

Firstly it is quite bitter, you have got to like licoricey aniseed flavours and classically it would be a lot stronger than other spirits. Some products weigh in at 80%ABV which makes them rather expensive so beware of smaller bottles when making price comparisons. Like pastis it will louche or cloud up if water is added, this apparently alarms some people! Yet a little goes a long way and it is often a component of cocktails sporting names like Death in the Afternoon, the Third Degree, the Fourth Degree, Corpse Reviver, Green Beast, Jaded Lady, Dr Funk, Earthquake and USS Bomber; all of which may not encourage ready experimentation! 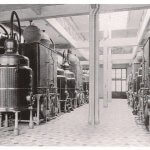 Absinthe started off in the late 1700s as a herbal tonic made by a Doctor Ordinaire in Switzerland as wormwood was thought to cure many ills including jaundice, rheumatism, anaemia, and menstrual pains as well as even enhancing breast dimensions! The recipe passed through a number of hands and went commercial when a certain M Pernod started making it at Pontarlier in France back in 1805.

The main botanicals are grand wormwood, green anise (usually the largest weight in the batch) and fennel seeds with varying quantities of star anise, hyssop, lemon balm, thyme, mint, coriander, chamomile and sage. These are macerated and steeped in 80%ABV neutral grain spirit overnight. Distillation then removes the volatiles leaving the very bitter absinthin from the wormwood behind. The green colour comes from a further steeping of the distillate at around 55oC with roman wormwood, hyssop, lemon balm and fennel seeds where the alcohol leaches chlorophyll from the herbs and further aniseediness in a process akin to making bathtub gin. Herbs are expensive so in the past, the unscrupulous have used nettles, indigo, turmeric, aniline-green, or even copper sulphate. Such adulteration could have contributed to a slow poisoning of aficionados in the past.

Fin de siècle posters in the heyday of absinthe

Wormwood contains thujone and this mono terpene is a known neuro-inhibitor. As the local bans of absinthe were lifted from the late 1980s, the EU set a maximum concentration of 35ppm while the US is only 10ppm. The US lifted the ban in 2007 and France only in 2011 although apparently it was always available as long as it was called something else! Dusty bottles found in long abandoned hotel cellars have been analysed and the thujone content would have satisfied modern standards. To have any neurological effects, you would need to drink several bottles of the stuff and the alcohol would catch you out long before the thujone would.

Therein lies the crux of the demonisation of absinthe; with echoes of Britain’s Gin Lane and the later ‘drunk for a penny and dead drunk for tuppence’, the French were simply drinking too much. There was a shortage of wine and brandy after the Phylloxera aphid destroyed most of the country’s vineyards with wine production falling by three quarters between 1863 and 1889. The national psyche was much affected by losing the Franco Prussian War in 1870 and so a cheap and plentiful spirit probably helped to cheer everybody up. Noted imbibers included Toulouse-Lautrec, Oscar Wilde swore he walked through a field of tulips after a whole night in the pub while Van Gogh cut off his own ear to give to a local prostitute before committing suicide a short time later. He drank his absinthe with black ink as he thought it tasted better! 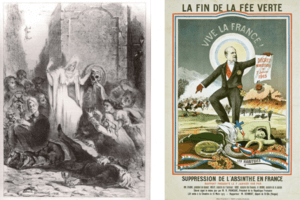 Eventually the French banned it in 1915

These guys were also dabbling in various narcotics so euphoria was enhanced and thujone probably had little to do with it. The paintings of Manet and Degas showing the effects of absinthe would no doubt have fuelled the growing temperance movement. Absinthe sales in France rose from 750,000 litres in 1870 to 36m in 1910. Forced to act, the authorities banned the green fairy from 1905 in Belgium followed by Switzerland, 1908; Netherlands, 1910; USA, 1912, and Italy, 1913. In France, absinthe was prohibited in 1915 and the Germans finally banned it in 1923. 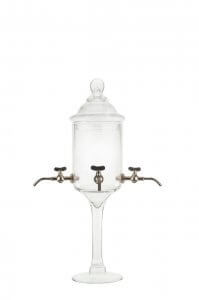 While a number of mixologists espouse making a long drink with tonic or ginger ale, true aficionados will get all the accoutrements of 1890s absinthe ritual. First you need a chunky glass with a lower section to hold a measure of spirit and an upper mark to tell you when to stop diluting it. Then you place a flat perforated ‘spoon’ on the top of the glass and drip water held in a communal fountain on to a sugar cube. Add it slowly at first to soak the cube and start dissolution. A sugar solution falls into the glass and the spirit goes cloudy. Once up to the level, the rest of the sugar is stirred in and the enjoyment and some hallucinogenic creativity may begin – perhaps!