The Hop – The Spice Of Beer

As autumn morphs into winter, the UK hop harvest is safely gathered in. By now some lucky ale drinkers will be savouring the delights of a fresh hop brew. There is a mad dash from the hop garden with 80% moisture ‘wet hops’ aiming to coincide with a copper just about to come on the boil. A hop tea is prepared as the idea is to get the fragrances lost in the oast house into the finished beer. Boston Beer in the States even manages to get a load of wet hops from Bavaria delivered to Boston in less than 24 hours. Yakima Chief in the USA is now freezing fresh hops which, provided you have -25oC storage, you can brew such beers any time of the year.

But all is not well in the world of the British hop. Eying the fact that the New Zealand government invested NZ$8 million in its hop industry back in 2018 to try and develop proprietary varieties that sell at a premium worldwide; our industry wrote to the UK government earlier in the year saying hop growing was on the edge of a precipice. We have some fifty odd growers with an average acreage of less than 60. The Pacific northwest of the States has an average farm size of 837. The acreage of Citra in Washington, currently the world’s favourite aroma hop alone is 11,997, that is some five times the total British area. Despite smokey taints from local forest fires, it looks like there will be plenty available. 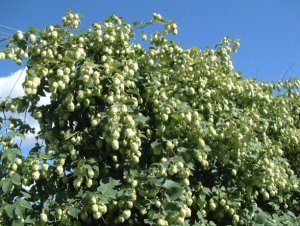 Hop production cannot be turned on and off again like other crops. There is considerable investment in crop supporting structures which cannot be used for anything else. The precipice is due to covid and the sudden drop in cask beer output which has left excess stock of hops and plenty of spot purchasing possible from abroad. Maybe we are already at the edge as provisional Hopsteiner figures published in October shows a declining acreage from 948ha in 2018 to 669ha this year. One large grower abandoned hops for this year. This area is estimated to produce 835t of hops and this yield only exceeds that of Romania, Slovakia, Slovenia, Turkey and Ukraine in the hop growing world. Beer production is still subdued and only 40% of the UK 2021 crop is contracted forward, down to only 10% for 2024. The crops in the States, Germany, France and Australia are over 90% contracted and only down to 60% in 2024. Brewers are not yet confident about the future and the supermarket brands we went for during lockdown are largely brewed with imported hops. You cannot blame the farmers for looking at growing more assured fruit crops or the brewers looking at importing.

A lot of people think that beer is made from hops indeed hops are almost all used in the brewing of beer but 100litres of typical 4% ABV ale will use only 100g of hops which is about 1/10 of the weight of malt, thus hops are better described as the spice of beer. The US craft industry has much stronger and very hop forward beers so their Brewers Association reckons that US micros are using something like 650g/100L. 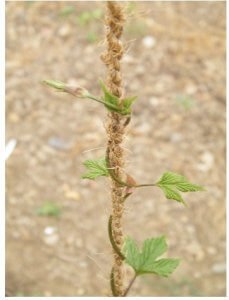 The hop is a herbaceous hardy perennial on a permanent rootstock, the plant dies back to its base every year. In spring the new shoots climb with tiny hairs on the stem and the backs of the leaves. The hop cone is strictly not a flower but a strobilus formed of overlapping brachioles. At the base of each brachiol by the stem, yellow resin glands contain the active bitter ingredient and the oils which give hop such a distinctive aroma. Bitterness is extracted from the hops by boiling during which process all of the aroma will go up the chimney. To retain hop aroma some hops have to be added after the main boil in a process called late hopping or else later still has dry hops to the cask or maturation tank. Classic pilsner lagers are late hopped as are robust English ales. 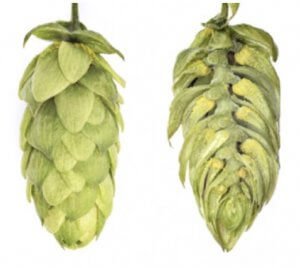 The hop is an odd plant as it is dioecious, it has male and female flowers on separate plants. The seeds contribute little to the brewing process and seedless hops have been grown in Europe for a long time. They do increase the weight of the hops which is good for the farmer but useless to the brewer and some say that seeds affect the flavour of delicate lagers. With so many feral males in the hedgerows, eradication is time consuming so most English yards still have one male plant for every 100 to 1000 females (it depends which farmer you speak to) saying that the fertilised florescences are more tolerant to the ingress of mildew.

The plant is distantly related to the elm tree and to cannabis but without any of the latter’s psychedelic properties. It is rather fussy too; it only grows well between 30 and 55o latitude as they must have 15 hours of daylight and 120 days without frost during the season. They also need a six to eight week dormant spell with the temperature below 4oC. The roots go deep and they do not like being soggy.

To make pellets, the hops are milled and extruded before packaging under an inert atmosphere which allows ambient storage. The hop oil keeps the pellet integral

The crop is now bought on the concentration of an active bitter ingredient called alpha acid. Traditional English varieties such as Golding and Fuggles which have been around since the 19th century weigh in at around 4% alpha acid. Plant breeding has increased yields, the greatest concentration being found in a German variety called Polaris which can contain 22%. Close behind are US hops Eureka! and Pahto with up to 20% acid. The UK has Admiral up to 17%.

Every year hops grow from a rootstock to 5-6m in height and are supported on expensive wood and wire work. The hop yard is strung in the autumn and the shoots trained up the coir string every spring. At harvest time the strings are cut down and the hop bines taken to the sheds where the cones are separated from the leaves. Fresh hops need to be dried quickly to prevent deterioration even then hops are easily oxidised by the air if not kept cold until required. Many brewers now use pelleted hops which were first produced in the 1970s, these have been milled, compressed and vacuum packed for ambient storage. Some 75% of the world’s hop crop is now processed into pellets or extracts.

The oast houses of Kent and Worcester with their conspicuous conical cowls are famous reminders of an industry that peaked at 29053 hectares in 53 counties back in 1878, today the area is only around 700 ha in six counties. Modern beers have lower bitterness levels, the yield of alpha acid has improved and continental lager brewed in Britain often uses imported hops from Germany and the United States.

In the old days picking needed vast amounts of labour and so the industry consolidated in areas close to large centres of population like London as well as South Wales and the West Midlands. A thirty acre yard would need 70-80 pickers as well as 30 odd locals and the picking would last up to seven weeks. In modern times each hectare of English hop garden will yield 1.2 to 1.5 tonnes of hops. Due to wilt and other diseases there was a general move towards the West Midlands and now some 55% of the hop acreage is grown there.

No one really knows when hops were first used in beer. In Roman times Pliny, writing about lupus salictarum, was eating them and not brewing with them. Similarly there is a reference to an abbey hop garden at Corbie, in the Somme valley near Amiens in 822 but the shoots might only have been used like asparagus. Hildegard of Bingen wrote around 1150 that hops when put into ale stopped putrefaction and led to longer durability. So we have been brewing with them for a thousand years.

In the old days. Hops used to be trained up chestnut poles, the Bohemian lady is tying them up; strings were later hung from high wires reached by men on stilts. Hop pickers in Kent before the 1960s and the invention of the picking machine

King Wenceslas did not ban the export of cuttings from Bohemia but Emperor Charles IV did. Hops did not spread to the British Isles until the 15th century and did not get off to a very good start with the authorities as Jack Cade’s rebellion in 1450 was reputed to have been stirred up by peasants high on the new fangled beer. There is an interesting anomaly as hops were found to be part of the cargo in a shipwreck discovered in the marshes between Faversham and Whitstable in Kent while a new drainage channel was being dug. Dendrochronology suggests the ship’s timbers were cut in the 890s! There is absolutely no evidence to suggest they were used in brewing 400 years earlier than we thought. Hops have been used in tanning, dyeing and stuffing hop pillows to help you sleep but probably not English brewing until much later.

Hops were extensively grown in the sixteenth century with the immigration of Flemish weavers and Dutch brewers introduced the words kilderkin and firkin (18 and 9 gallon casks) which we still use today. Hops were never banned as some sources suggest but there were attempts to protect the indigenous hopless ale from the new hopped beer but the terms ale and beer soon became synonymous with the hop being the universal flavouring agent. Hops have bactericidal properties that help beer to keep longer and it did not have to be so strong to keep infection at bay. With a hop rate of a tenth of that in days of yore, today’s brewers have to resort to basic hygiene, pasteurisation or sterile filtration and sophisticated detergents and sterilants to keep beers free of contaminating bacteria.

Hop harvesting today. Carrying the cut bines back to the picking shed, bines are strung up and then the cones and leaves beaten off. The cones are separated on inclined trays and moved to the modern oast for drying

Next time we shall consider the future of the hop industry with breeding new varieties to cope with the modern world and exciting developments using hops as pharmaceuticals.