The Importance of Wood in Whisky Making

By law in the UK, whisky must spend at least three years in an oak cask before it can be bottled and sold as ‘whisky’. The cask must be less than 700L in capacity so that bulk storage in wooden vessels is not allowed. Distillers will often have a sample of new make spirit where the casks are filled to demonstrate to visitors the fiery and immature nature of the raw product. It is also crystal clear and could be at 75%ABV which would make anybody splutter a bit! Stronger spirit takes longer to mature so it is broken down to around 64% for maturation. 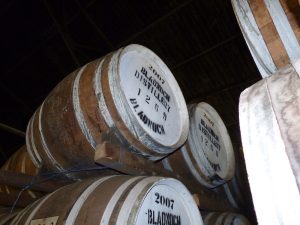 Casks would have been used to transport spirit since the year dot, the use of a wine cask might even have made smuggling easier and folk must have noticed that the character of the spirit was enhanced. Today the casks in use are mainly second hand in that they have previously held bourbon whisky or sherry. Distillers will play around with wine casks to finish off their products and provide a point of difference in the marketplace for special editions. Luckily, after prohibition in the States, powerful coopers unions forced a change in legislation so that bourbon could only be matured in new oak casks. There is a healthy flow of used casks into the rest of the world’s spirits businesses.

Oak is strong and has a tight grain to prevent leakage but is porous enough to allow exchange of vapours with the outside world and does not exude resins which would taint the enclosed liquid. The oak can be American or European and first users will be concerned about the terroir preferring north facing trees which give a straighter grain and the timber must be air rather than kiln dried and properly seasoned before the cooper assembles 36 staves and two heads. 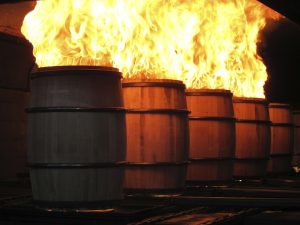 Casks will be toasted, they catch fire actually, and this layer of char provides activated carbon type reaction sites to remove sulphury flavours. It will also break down the oak cell walls to allow reactions with the rest of the wood. A heavier char will caramelise the wood to provide colour and chemical changes as in the production of vanillin and other ‘oaky’ flavours.

The American Standard Barrel is around 200L and offers the highest wood surface to volume ratio for maturation. Some distillers will aim to use smaller casks to hasten operations. Laphroaig famously has some quarter sized casks. Coopers can also add staves to make up a 250L hogshead to save on space if not time. Sherry casks are larger butts at 500L.

Dunnage or pallet storage at Isle of Arran (left) and Inchdairnie

Casks can be refilled but the third and fourth filling will be with spirit destined for blending. After that the cask is largely spent but if the garden centre does not beckon it is possible to scrape off the internal surface and re-char to make the cask as good as new. In theory that can be carried out a number of times until the timber thickness becomes dangerously thin. A cask might be used for 30-40 years so no one has any multiple rejuvenated casks in use yet. 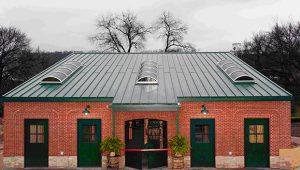 The newly filled spirit has all the flavours associated with the materials including any peat character, the congeners produced during the fermentation and the properties conferred by the still design and degree of contact with copper. There is a fairly rapid phase when the immature flavours are removed by the char layer then there is a steady build up of compounds derived from reactions with the oak itself. You can overdo it and a very active cask can produce a preponderance of ‘wood’ character while a less active one would be slow to build up the required mature character in time. The secret is to have a wood policy so that if you want an eight year old, it is ready 2922 days after filling. At the cheaper end of the market getting the spirit ready after exactly three years will save costs of storage. I am told that annual storage fees are around £16 per cask for larger sizes and there are some 20 million of them in Scotland! There is a lot of capital tied up and ongoing costs of renting space. In the States Buffalo Trace has Warehouse X bristling with instrumentation; it has four sections for 150 casks each, they are investigating the effects of light, temperature, humidity and air flow to learn more about a very complicated interaction of factors. 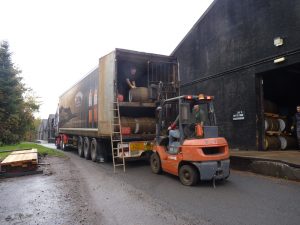 Casks being delivered for storage at Bladnoch

Traditionally casks were stored three high on their bellies in earth floored draughty dunnage warehouses. Nowadays to save expensive space many are stored on pallets on their heads perhaps 6-8 high or else on racks. The temperature in the roof on a summer’s day even in Scotland will not be the same as at ground level, so many warehouses will blow air around to even out temperatures.

Now what about those angels and their share? Oxygen can diffuse into the cask and react with volatile compounds to further alter flavour but depending on temperature and humidity, water and/or alcohol can diffuse out. As the grain is tight most is lost through the end of the stave and the bung hole where the grain is cross cut. Some 2% is lost each year so a ten year old will only have 82% left. In Scotland the loss of alcohol is relatively greater than water due to the humid climate so the %ABV will go down a bit as well. Maturation reactions will go faster at higher temperatures but then volume losses will accelerate as well however a cooler warehouse will reduce evaporation but the whisky will take longer to mature; it is a fine balance but work continues to minimise losses.

Once matured, the master blender is a key person in the organisation. He or very often these days, she is in charge of both the inventory and the wood policy to ensure the required spirit is available for the finished product which can be blended into the house style. Even for a single malt, casks will be blended together to even out natural variations. Only 8% of malt whisky is sold unblended so it will be mixed with other malts and a similar mix of grain whiskies to produce a blended whisky. The ‘recipe’ will detail the various required parts of the blend and it is not unknown for distillers to trade malt whiskies to meet shortfalls in some components. 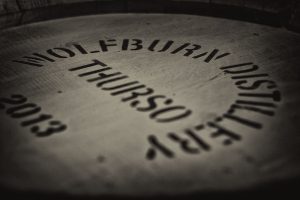 The master blender is the sensory authority and will get casks brought forward, sampled and then dispatched to the bottling plant. Few distilleries bottle their own and most packaging plants are between Glasgow and Edinburgh. The casks are disgorged and may be held in a marrying tank for a week or so to ensure total mixing. Some batches may be finished in casks which have held specialist wines although care has to be taken to avoid vinous flavours taking over the scotch characteristics.

With a tendency in many markets to put ice in whisky, the spirit may be chilled to zero or below and filtered so that various fatty acid esters and proteins do not get into the finished product and throw an unappetising haze in the glass. Other distillers will trumpet ‘unfiltered’ on the label and there is no need to bother if the spirit exceeds 46%ABV.

Whisky is 17% of the UK spirits market. US imports are thriving but the popularity of gin has dented the blended scotch market. Exports are buoyant with 93% going abroad and hopefully all the new distilleries and those now out of mothballs and producing scotch as if there is no tomorrow will not end up sitting on excess stocks. Let’s hope too that efforts in the States to allow bourbon casks to be refilled do not come to fruition. 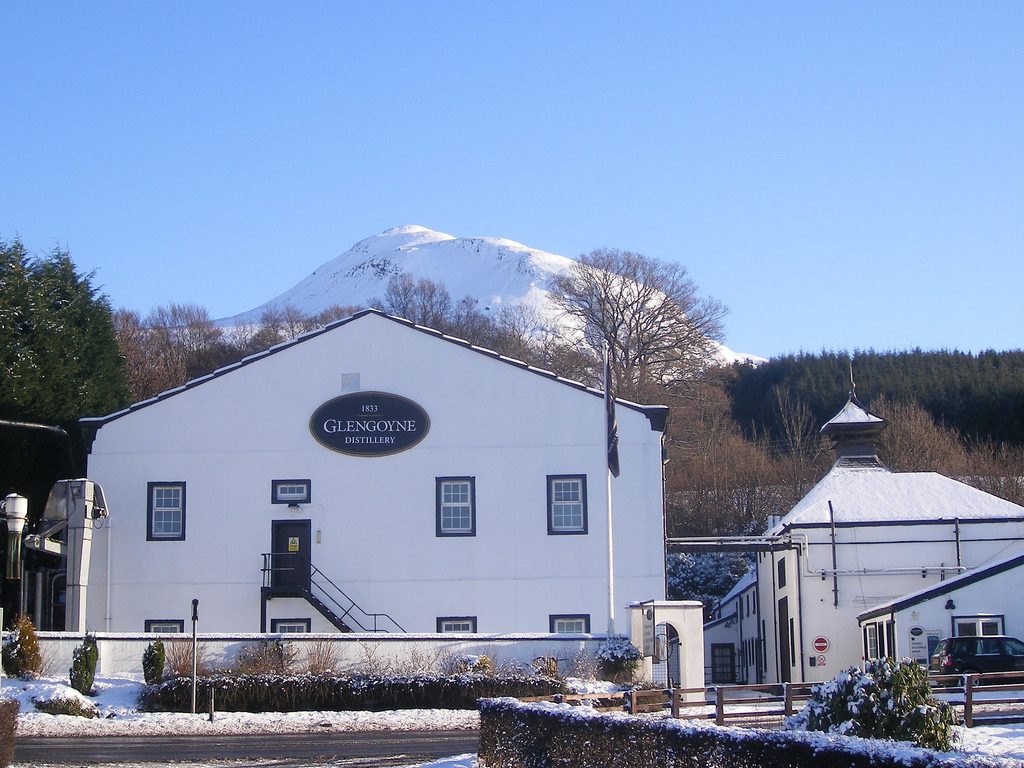 Glengoyne Distillery with 1402’ high Dumgoyne behind

It will not surprise you to learn that less than a quarter of scotch whisky production is in the hands of Scottish companies. Biggest international is Diageo with 27 malt distilleries and 36% of the market. Notable distilleries include Lagavulin, Oban, Dalwhinnie, Mortlach and Talisker. Click here for the list (PDF download). Second with 19% is Pernod Ricard with ten plants and notable distilleries at Glenlivet and Aberlour. The Edrington Group based in Glasgow owns five distilleries: Glenrothes, Glenturret, Highland Park, Macallan and Tamdhu. Also Scottish and family owned is William Grant with Glenfiddich and Balvenie. Bacardi owns the old Dewars empire with Aberfeldy and Royal Brackla. Beam Suntory has Bowmore and Laphroaig on Islay, as well as the distilleries at Ardmore, Glen Garioch, and Auchentoshan. US distiller Brown Forman has Ben Riach, Glen Dronach and Glenglassaugh while Moet Hennessy Louis Vuitton has Ardbeg and Glenmorangie. Thai Beverages took over Inverhouse with Old Pulteney, Speyburn, Balblair, Knockdhu and Balmenach while AllianceGlobal has Jura, Dalmore Tamnavulin and Fettercairn. Distell from South Africa has Bunnahabhain, Deanston and Tobermory’s Ledaig.