The Phenomenal Growth Of English Wine

According to the latest figures from Julia Tristam Eve at Wine GB, there are 522 commercial vineyards and 164 wineries in England currently producing 15 million bottles. That is a two and a half times increase in just five years. More than 8,600 acres of grapes are being grown and that has doubled in the past ten years. That is projected to grow by half as much again by as early as 2021. 66% of the wine produced is sparkling with 24% still white and 10% is red or rose.

Over 150 vineyards are open to visitors; watch out for the brown signs. With more vineyards than Scottish distilleries, a wine trail could be a lucrative tourist initiative. Vineyards are opening eateries and are also popular venues for weddings. Travel operators like English Wine Adventures are organising tours. Recent press releases have a brand new customer centre on the Hush Heath Estate in Kent and the launch of a West Dorset tasting path hosted by three vineyards: Bride Valley, Furleigh Property and Langham Wine Property. Llanerch Winery in South Wales has opened a 26-bed lodge emulating the success of oenotourism downunder.

According to Eve only 8% of English wine is exported, it will likely grow to 25% in the next few years. Wine GB has forecasted some £350m of exports by 2040. Ridgeview in Sussex is bound to be popular as the Queen had it at the recent State banquet hosting President Xi Jinping from China while President Trump had 2014 Windsor Great Park Vineyard from the Queens own backyard where Laithwaites, the wine merchants manage a seven acre yard.

Around three million vines have been planted in England and Wales this year alone or 690 ha of new vineyard. This figure is nearly double the amount planted in 2018 and up from one million in 2017, according to WineGB. This pace of growth clearly reflects the industry’s confidence.

Last time we considered the phenomenal growth of English sparkling wine helped by a changing climate and similar environmental factors to those around Epernay in northern France where the finest champagnes come from, these factors contribute to that perhaps rather nebulous term ‘terroir’.

Will England ever take over from the Champagne region dans la belle France; probably not! Wine GB reckon output might reach 40m bottles by 2040 but France has 76,000 acres devoted to sparkling wine in the Champagne area producing 300m bottles a year. Having said that, researchers at the University of East Anglia have identified some 80,000 acres of prime UK land suitable for viticulture. Factors include elevation less than 100m, south-facing slopes of between 5 to 10% are considered optimal; any steeper and you cannot use machinery; any flatter and you risk frost which can be particularly damaging in April and May. Extrapolating the prevailing conditions at England’s largest 13 existing vineyards, it is very likely that a number of them might be in the wrong place! If those average current characters were used, the study suggests there would be getting on for half a million areas suitable!

A field of wheat might yield 3 tonnes per acre at around £200 per tonne. Growing grapes could yield 3 to 4 tonnes per acre at perhaps £2000 per tonne minus the three or fours years you have to wait until a mature harvest is possible. Do the sums. Another issue to be tackled is the wine yield per hectare. The production figures quoted last month when recalculated to hectolitres per hectare show that France is a lot more productive at 71hL per ha against England’s 56.6 (using the area planted four years ago as much of the present acreage is not yet mature). Maybe some vineyards are in the wrong place but that yield is a lot better than 6hL/ha quoted back in 2012! Experts think wind is a major factor but the boffins have been unable to correlate wind speed and frequencies in the growing areas.

Most of the potential new land is in Kent, Sussex and East Anglia with emphasis on the underused areas of Essex and Suffolk. Warmer climes may allow possibilities elsewhere in the country but at the moment the most northerly English vineyard is Ryedale at Malton just east of York. There is a 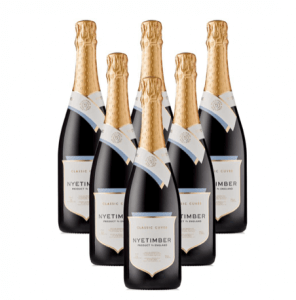 high profile award winning winemaker on the outskirts of Gateshead but Laneberg Wines make still wines from Bacchus grapes grown in Leicestershire. Sadly Scotland’s first home-grown wine, produced by Christopher Trotter, in Fife was described as ‘undrinkable’ by experts, a bit like sherry that might complement a very strong cheese they said! There is apparently a polytunnel on Unst the most northerly of the Shetland Isles which makes a very creditable grape jelly but not wine.

So France is some way ahead but Corinne Seely in charge at Exton Park in Hampshire suggests England might overtake France in terms of reputation, and she is a French viticulturalist!

Now who should you look out for when you are next at the wine shop?

Chapeldown aims to have 950 acres under vines by 2021 and is England’s biggest, then there are Wiston, Leckford, Nyetimber, Ambriel, Herbert Hall, Black Chalk, Ridgeview, Jenkyn Place does a nice rosé, Raimes, Plumpton, Denbies, Simpsons and the quaintly named Winbirri in Norfolk. Currently, award-winning sparklers from Digby Fine English, Hattingley Valley, Hush Heath Estate, Bolney Wine Estate, Gusbourne, Exton Park, and Camel Valley are already being exported to America. Nyetimber’s 2010 vintage is selling for £150 and can be laid down for drinking later just like a fine Dom Perignon.

Note – Do not get confused by the term British wine, this is fermented here from imported grape juice concentrate, proper wines are produced from freshly pressed grapes.

Next time we shall tell you how a modern sparkling wine is actually produced. 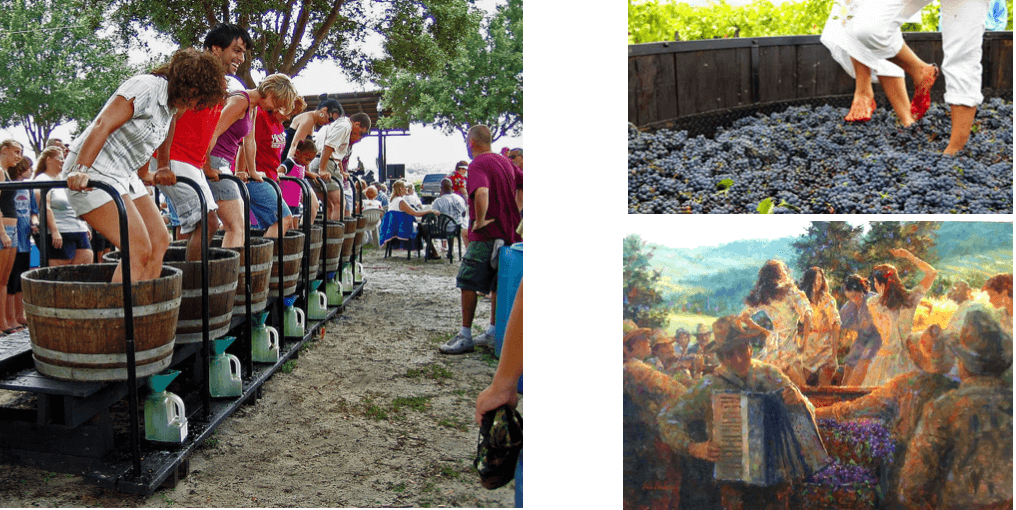 Treading grapes competition in Arizona and a painting of roistering peasants by Eric Michaels,