The Story of Beer – Setting the Scene

We have been blogging about beers but skirting around brewing technology in general. We have looked at no- and low alcohol products, life style beers like low carbs or organics, home brewing and some aspects of sustainability, yet we have not told you the basics about how it is brewed.

Beer has been around in the written record for some five thousand years. Indeed a clay tablet supposed to show a part of the process fetched £175,000 at auction earlier this year. Found south of Baghdad, it dated from 3100BC and is thought to contain the oldest depiction of a personal name. He or she was called Kush-im and sadly he or she was an accountant! Paleo-botanists from Stanford University can take the story back further with pot residues where germination of cereals has been proved and beer making can be inferred. The oldest residues have been found near Haifa in Israel perhaps 13,000 years old. So brewers should be getting pretty good at it by now! 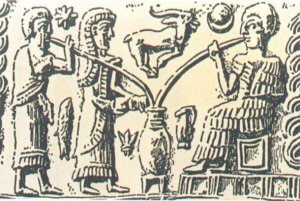 We know that early beers were consumed in communal groups through reed straws which helped filter the grainy bits out. Later residues have shown the presence of various narcotics suggesting beer was used in mind-altering rituals rather than just fuelling a cosy chat round a winter camp fire. Drinks fermented from a cereal mash alone can be rather satiating so over the years bitter herbs like bog myrtle, rosemary and yarrow crept into the recipe to balance the fullness of the beer. Hops have been used for that bitter contribution for only a millennium and have the added advantage of acting as a preservative. Hops are now almost universally employed in modern brewing.

Brewing with various foraged herbs would have been a home industry until the growth of larger towns. Ale houses would then have brewed their own as would the monasteries. There is a persistent myth that everyone drank beer because of diseases carried in drinking water; the rich may have done but the poor simply got ill! There was just not sufficient brewing capacity and certainly not the amount of grain available to satisfy everybody. The eighteenth century saw the establishment of common brewers who took advantage of economies of scale to supply any number of pubs in the area.

Water is an important component of beer. On the left is an old well preserved at Pilsner Urquell at Plzen, CZ. Well heads are revered in Europe; here is Paulaner in Munich and Budvar at Ceske Budejovicy.

With no knowledge of chemistry, local water sources would dictate some of the characteristics of the finished beer and usually beer would not have the keeping qualities to travel very far. The famous exception is of course Burton on Trent where the gypsum laden hills north-west of the town allowed rainwater to pick up sulphate ions which we now know lower the pH of the mash and the subsequent beer such that many bacteria, which would otherwise cause off flavours, are unable to grow. Burton’s brewers did not know this but took full advantage to export overland to London in the 1620s and later to the Baltic via Hull and most celebrated via Liverpool to the burgeoning Empire. Alton and Tadcaster are other small towns with hard water where multiple breweries were established.

Cold is important for lager brewing. On the left is the ice pond for collecting blocks of ice in the winter at Asahi’s Tychy plant in Poland and on the right an early Carl von Linde compressor still in place at Paulaner in Munich.

Colonial expansion and mass emigration from Europe took local brewing knowledge and traditions overseas. The Brits tried ale brewing even in climates which were too hot to do it well. Lager brewers from Europe exploited soft rock to dig extensive storage cellars and collected ice during the cold winters waiting for Carl von Linde to invent his ammonia compressor in 1875. 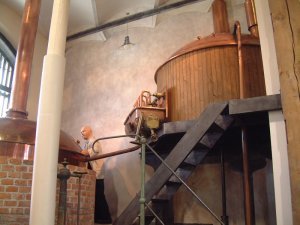 A mock up of a nineteenth century lager brewhouse at the Pilsner Urquell Museum in Plzen, CZ.

Beer is the world’s most popular alcoholic beverage. Over 70% of alcohol consumed is in the form of beer. Today around 96% of the world’s beer is loosely called Pilsener although Miller Lite bears little resemblance to the beer emanating from Plzen in the Czech Republic apart from its colour. Ale survives in the British Isles and Belgium but the more recent interest in matters artisan and the growth of ‘craft’ brewers has led to many smaller brewers around the world dabbling in India Pale Ales and Irish Porters. Indeed many smaller brewers in the UK are moving to lagers as they find it is easier to get a keg of beer (often in a one trip container) into outlets not large enough to sell traditional cask beer which requires a deal of loving care and a steady sale to get right.

Delicately flavoured lagers are more difficult to brew properly as the relative ‘roughness’ of an ale will hide a multitude of sins. No one should try and argue that Budweiser is not one of the world’s great beers – clean as a whistle and testimony to the brewers art – the beechwood chips; laboriously still used are not essential!

There is a perception that modern beer, particularly from the larger breweries, is stuffed full of chemicals, it makes you fat, is generally bad for you, it is drunk in prodigious volumes on a Friday and Saturday night and is certainly not for women! It isn’t, it doesn’t, it isn’t, Friday and Saturday nights are now much quieter and women do enjoy beer. Many reports suggest that women do not want their own ‘pink’ beers; they want a welcoming ambiance, proper glassware less than a pint in volume and decent loos. Pubs that address these issues will survive the inevitable post Covid shakeout.

Beer is an alcoholic beverage produced from cereals by yeast fermentation. We explained how malt was produced back in our sixth blog early in 2019. The maltster has mobilised the enzymes which the barley corn would need if it was germinating in the field where starch gets converted to sugars and protein to amino acids. The process is arrested by heating which kills the embryo but preserves the enzymes and adds some colour to the finished malt. 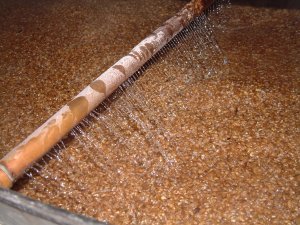 Spraying hot water on to the grain to recover all the sugar in a process called sparging.

The brewer then reactivates these enzymes by mashing the milled grain with water at around 65oC so that the starches are converted to sugars in an hour or so rather than a week in the field. The sugary extract called wort is then boiled for an hour with hops to extract the bitterness. This hopped wort is cooled for fermentation and yeast is added. You will immediately have noted that brewing is far more complex than wine or cider making where nature has provided the sugars for fermentation in a ready-made package of the grape or apple.

After fermentation, the green beer is ‘conditioned’ to remove unwanted flavours like butterscotch, green apples or farty aromas. The beer is cooled before residual yeast and entrained proteins are removed by filtration. The CO2 level is adjusted before packaging.

Beer goes to the supermarket as smallpack, cans and bottles. More cans are sold than bottles as 24 packs of Carling or Fosters are popular takeaways. Trials with PET bottles have all but ceased as barrier technology to keep oxygen out and carbon dioxide in is largely inadequate so brewers can hide behind green planet saving credentials when abandoning trials. But, it costs a lot more transport a glass bottle than a plastic one. The on-trade gets kegs or casks for draught dispense.

At this point I realise that we have only covered a bit of history and the bare bones of the process. What is the difference between an ale and a lager, why is brewing water so important, what is a porter, what is the difference between a keg and a cask or top and bottom fermenting yeasts, what do the beechwood chips do? There is lots more to talk about next month. Is beer full of chemicals?

A typical English traditional brewery is Harvey’s at Lewes in West Sussex. On the left is the brewing tower originally relying on gravity. In the middle is a copper where the wort is boiled and on the right is a lined wooden fermenter, the wheel is used to lower an inverted cone ‘parachute’ into the yeast on top of the beer to collect it for the next brew.