Those Peels, Barks, Seeds, Spices, Fruits And Flowers – How To Make Gin

Christmas is a-coming and the shops are full of stocking fillers with a gin theme. John Lewis has a pop up stand where you can build your own gin (Hendrick’s, Pink Pepper, Edinburgh Gin or Slingsby Rhubarb) and tonic Christmas cracker at £32 for four. Then Fever Tree has an advent calendar at Waitrose for £60 with a gin miniature one day and the tonic the next just to test your patience. Daffy’s Gin has a £7.49 Christmas card containing a miniature you can buy from Harvey Nicks. County Kerry’s Dingle Gin has even put 50mL inside a Christmas tree bauble complete with keep away from children warning. Bombay Sapphire has invented an odoriferous paint to be applied to the inside of a gin glass which will slowly change the colour of your G&T and infuse other subtle flavours. Individual bars joining the scheme get a different paint flavour.

On the product front, gins are appearing which are sweeter, redolent of the old Tom Collins cocktail. Some are even using honey and others adding ginger. There are pink ones but those makers using autumn berry fruits are discovering that the colour is not fast during shelf storage. Pinkster even comes in a 3L bag in a box which sells for £135! Then there are deep blue ones which turn pink when the tonic is added. An infusion of pH sensitive pigment from butterfly pea blossoms is the active ingredient. Some are even being aged in cask but you have to be careful that woody flavours do not dominate. 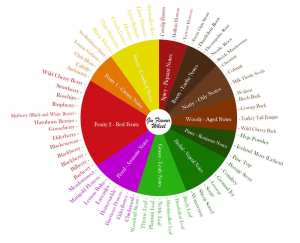 If you look at the websites of most brands, they will name at least some of the botanicals. There are probably around 200 of them which have been used in gin making worldwide. Juniper, coriander, citrus peel, angelica and orris root, cassia/cinnamon and almonds being the most common. Less so are Bombay’s cubeb pepper and grains of paradise; Hendricks cucumber and rose petals; blueberries in Brockman’s and lemon grass in Gilbeys. So gin can have a complex recipe but the final flavour will depend on where the cuts are made during distillation which could lose desirable components or add undesirable ones. The final strength of the product is important as some aromas like citrus do not carry well below 40%ABV in bottle. It is also worth bearing in mind that gins tend not to be consumed neat so your gin should be formulated with the range of tonic waters in mind. 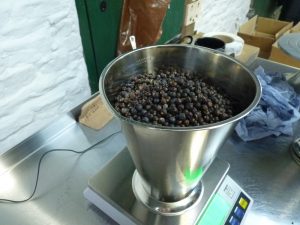 Juniper being weighed out

Juniper will be added at between 50 and 100g for every litre of pure alcohol, if juniper is X then the weight of coriander is X/2; cinnamon, cassia, angelica, licorice, cubeb berries and grains of paradise would be X/10 while orange and lemon peels, orris root, ginger, cloves and other herbs and spices would be X/100. Apparently it is not unknown for recipe seekers to go through the waste bins of established distillers to inspect the spent botanicals! A small one to five litre bench top alembic can be used to hone recipes. 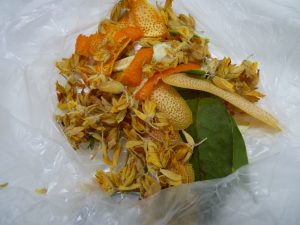 Juniper would come from Tuscany or more likely Macedonia. It will grow in temperate Europe but the bushes take a long time to mature so some enterprising distillers are getting it planted in polytunnels. Coriander is usually from Bulgaria or Morocco; it is grown in England but in insufficient quantities to interest the larger players so it is a useful indigenous ingredient for the label. Dried orange and lemon peel comes from Spain and Morocco or fresh from the local supermarket where the bitter pith must be avoided and the addition reduced due to the potency of the fresh peel. Spicy cassia arrives from China or Indonesia and sweeter cinnamon from Sri Lanka; licorice root from Syria or China, angelica comes from Saxony and orris from Italy. These latter botanicals do impart earthy dryness and slightly floral notes but they are also able to stabilise the other essential aromas and ‘fix’ or stabilise the finished gin flavour. Essential oils are then less likely to come out of solution when the product is cooled or the ethanol content reduced by the addition of tonic water.

The essential oils from the botanicals can be recovered either by distillation (called rectification) or by cold compounding which extracts flavour from whole botanicals or essences without heating. Most UK gin is rectified. Distillers will buy 96% grain spirit made from wheat or barley but Foxhole and Chapeldown use grape spirit while Chase uses its own potatoes. Adnams and BrewDog (LoneWolf) make theirs in the brewery.

Some distillers will macerate the botanicals to make extraction easier, some will steep in alcohol for several days.  These regimes are designed to soften the husks and allow the mixture of alcohol and water to start extracting the essential oils into solution. Others simply heave them in whole and start heating up. Famously Bombay Sapphire will pass alcohol vapour through the botanicals in a separate vessel to an 1836 design while others put citrus peels and delicate herbs and flowers in a basket above the level of the liquid.

The 96%ABV spirit is usually diluted with water to 50-60%ABV. The dilution of the ethanol has an effect on distilling time and the strength of the distillate coming off the still. The water makes it harder for the alcohol to come out and so it gives time for it to pick up the volatile essential oils. It also keeps the still boil temperature down for longer, so ensuring the desirable elements are all extracted. 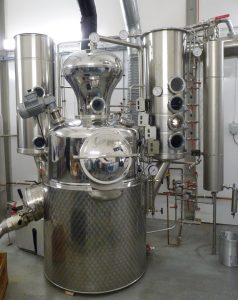 The 150L Kothe still at Seven Kingdom on the Isle of Man. It has a three bubble tray column with a ‘dephlegmator’ which extracts virtually all the alcohol in a 150 minute run

The length of time which the vapour spends in the still, condensing and reboiling during its journey to the condenser also helps define the finished spirit. Various bulges in the still neck will facilitate this process known as reflux. Some stills have hot or cold water fed ‘dephlegmators’ high in the neck which are used to control the length of time which the gin spends as vapour.

During the run, juniper is detected first, dry flavours, then sweet and citrus……an extremely bitter short piece in the middle and then all the floral and spice followed by a big coriander finish. The first few litres can run to feints. As the 96%ABV spirit has been rectified to exhaustive standards, there is no methanol to worry about but the condenser needs to be washed from the previous run. During the collection of the ‘hearts’, the volumes and %ABVs should be monitored. Care must be taken at the end of the run to ensure that desirable higher molecular weight compounds are collected before the %ABV drops off rapidly from 80% to mid 70s and diversion to feints can take place. The total collected volume should be at 70%ABV or higher. With a pot still the distillation continues until the %ABV drops to a level where the heat input costs more than the alcohol recovered. Tops and tails are collected and returned to the supplier as HMRC demands strict accounting of any duty suspended alcohol.

Then choose your bottle, label, stopper, strap and do not forget the duty paid sticker.