Vinegar has been known to man for as long as beer has. This solution of acetic acid is used as a condiment, for pickling foods, making sauces and chutneys. It remains the housewife’s most ready source of acid for cleaning and in the US and Japan, vinegar parlours are springing up where people drink it for alleged therapeutic properties. The word is derived from the French, vin – wine and aigre which means sour or sharp.

Many beer brewers have made vinegar at one time or another so conclude that it cannot be very difficult to produce commercially. Vinegar manufacture is a kindred fermentation industry; brewing without the hops or boiling, fermenting with a bit added on at the end. A fermentation from malt is not the only substrate; there is wine vinegar (both red and white), cider vinegar, spirit vinegar and the famous balsamic vinegars from the Emilia area of northern Italy.

There are big plants at Middleton near Manchester (Sarsons – Japan’s Mizkan) and Burntwood in Staffordshire (Manor Vinegar owned by Baxters). These have packaging plants supplying the retail trade with small containers (glass but increasingly PET), food service (mainly in 5 and 20L plastic containers) but most will be dispatched to other food manufacturers to make pickles and sauces either in IBC transitanks or bulk 25,000L road tankers. At the other end of the volume scale, artisan makers are springing up to produce vinegars which they say are miles away from the stuff you sprinkle on your chips in the fish shop!

Well over three quarters of Britain’s vinegar is made from a 96% ethanol base, most of the rest is malt vinegar and a small amount is distilled malt vinegar which retains the flavours of the malt product but without the colour for making pale sauces and dressings. Culinary vinegar will be 4-5% acetic acid. 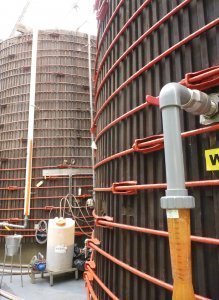 Looking at malt vinegar first. It starts with high enzymic distilling malt which is milled and mashed in at 55oc and the temperature would rise in stages through 58, 61, 64.5, 67 to maximise sugar formation over a 90 minute period. The brewer can then raise the temperature to 78oc for faster extraction of the sugary wort at the expense of lower finished alcohol content or else carry on at 67o. Wort at 1080o is cooled to 12o in summer and up to 18o when the weather is cooler. Distillers yeast is pitched into the wort stream and fermentation takes 56 – 72 hours to reach a finished gravity of 1010o and an alcohol content of 8.5 -9.0%. Had the lautering been carried out at the lower temperature the alcohol would be up to 10.5% but the process would take a day or so longer.

The yield is stored at ambient temperature before acetification with Acetobacter aceti already in the vessels from a previous part emptied batch or else grown up in the laboratory. In the old days large 500hL wooden acetators would have been stuffed with birch wood twigs to provide a matrix for the bacteria but the vessels are now fitted with internal cooling coils and a rotating aerator at the base. Interestingly Manor Vinegar disposed of some old wooden vessels and four found a new home in Greenwich. The 350,000 annual visitors to see the preserved tea clipper Cutty Sark repaired after a 2007 fire will not realise that some of the Douglas fir decking and mahogany lifeboat furniture (originally internal vessel baffles) were once vinegar acetators.

8.5% ethanol feed with no supplements produces 8.5% acetic acid after 24 hours, then just a quarter of the vessel volume is drawn off and a further charge of alcohol is added. The working temperature for acetification is 30oc. The process is very sensitive to air and temperature. The malt acetators can survive a lack of air flow for up to ten minutes, which is plenty of time to bring up standby generators in the case of a power cut.

Most spirit vinegar plant is manufactured in Germany by a company called Heinrich Frings based in Bonn which is the world leader in such technology with some 700 units in over 70 countries worldwide. The working capacity of the acetators would be around 100,000L and operating at 18-20% acetic acid. 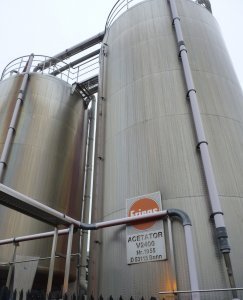 Neutral spirit is diluted with well water and mixed with a proprietary nutrient supplement from Frings said to contain two to three hundred different essential vitamins and minerals to keep Acetobacter happy at the limits of alcohol and acid concentration. The plant will suffer a catastrophic failure of the cell culture if it is starved of air for just eight seconds! An uninterruptable power supply is essential. Similarly the 20% operation needs very strict temperature control as well. The exothermic reaction to produce acetic acid is carried at 30oc, plus or minus just 0.1oc, at 30.8 acetification stops and at 31oc the cells will die. Then it will take a whole five weeks from a lab culture inoculation to get going again. There is a fine balance to be made between the attraction of yields at 18-20% acetic acid against the sophisticated control and constant attention which the plant requires.

The vessels do not have internal baffles as the mixing is facilitated by a carefully engineered bottom driven impeller which is machined to suck in liquid, mix it with filtered air at 600m3/h and expel the air and liquid into all parts of the vessel at 1500-1600rpm. Frings has a video of the operation which looks like the most aggressive washing machine you have ever seen! Of course air content is critical as well, too much and you will end up with CO2 and water, too little and the cells die! There are cooling coils around the periphery covering around 70% of the vessel height to control the reaction temperature. 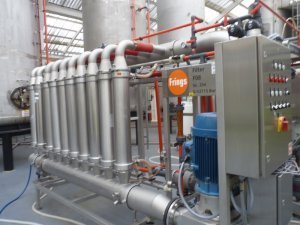 The process is semi continuous as the top two thirds (60,000L) is drawn off over 20 minutes at the end of a cycle. At that point the residue has an acetic acid content of 20.3% and alcohol level of 0.35%. Adding further substrate and nutrient needs to be carried out with great care and as the cells repopulate the medium where an optimum 8% acid with 3.5% ethanol should be maintained. The top up takes about six hours and then further alcohol at around 6%ABV is trickled in while maintaining the ethanol level at just 3.0%ABV and eventually the total volume reaches 100,000L. Once the batch is complete, the alcohol level is allowed to drop. The process does foam into a pair of dry scrubbers which are packed with multisided skeleton plastic cubes will collapse it and pass the residue to drain. After 72 hours on the 20% line (54 hours at 18%) the top two thirds is recropped and the process starts again. After production the vinegar is filtered using a pair of 0.2μ membrane cross flow units before packaging. 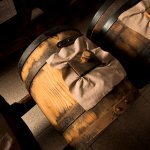 By contrast making balsamic vinegar is a much more leisurely affair. It can afford to be with a 40mL bottle of 30 yo retailing for £45 while Harrods sell 68mL of a 100yo for £250! It does not contain any balsam but its name comes from the Italian for soothing as it was originally taken as a tonic. It is a very dark concentrated and intensely flavoured product from the area centred on Modena near Bologna in northern Italy. It is used to flavour salad dressings and will add a bit of je ne sais quoi to soups and stews. A couple of drops on ripe strawberries, slices of ancient Parmesan cheese or even real vanilla ice
cream….then, wow! 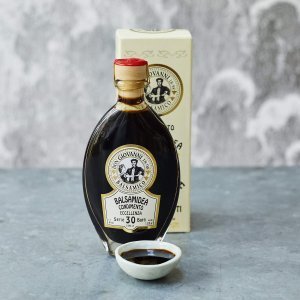 The substrate contains no alcohol and is must from the Trebbiano grape complete with skins, stalks and seeds. Cheaper products will blend wine vinegar in. The juice is boiled to concentrate it to 30% sugar and then it is allowed to ferment for three weeks before being put into wooden casks containing a vinegar mother which is a floating gelatinous, cellulose-based biofilm or pellicle containing acetic acid bacteria which works in tandem with the yeast derived from the grape skins already in the cask. There is a succession of casks in a solera system. The casks are made from different woods in order to impart different flavours. Over the years, the maturing vinegar is further concentrated by losses of water through the wood of the cask just like in whisky making. After twelve (the minimum), 18 or 25 years (sometimes longer) product is withdrawn from the smallest cask which is topped up from the next smallest and so on leaving space in the largest for some more concentrated juice. There is then no human intervention for another twelve months.