What Is Behind The Current Gin Boom And Can It Last?

Gin sales are steaming ahead. Brits are getting through over 60 million bottles a year. That is up by an enormous 33% in value and by 28% in volume on last year, so folk are buying more premium priced products. There are now 315 distilleries in the UK – more than double the number operating five years ago, the vast majority of these are fuelling a seemingly insatiable desire for gin. Many pubs will have a gin bar these days. This one is at the Prospect in Douglas on the Isle of Man.

UK sales figures from WSTA show a market worth some £1.6bn on top of exports of over £500m last year. Britain is by far the world’s biggest gin exporter; USA takes about a third of it followed by Spain which is a bigger market than the next five put together (Germany, Italy, France, Greece and Belgium). Data provider Euromonitor has even predicted that gin sales will outstrip those of blended Scotch whisky in the UK by 2020. UK regional supermarket Booth’s provides some recent information; blended scotch used to be a quarter of its spirit sales now it is down to less than 8%. Gin is currently 40% of its spirit sales according to buyer Peter Newton and growing at 38% year on year following a 40% increase in 2017.

The British public shows no sign of growing tired of trying new gins with perhaps as many as 600 brands now available on the market. The Office of National Statistics has added gin to its list of regularly bought goods to calculate inflation figures for the first time in 13 years. All this has helped the Government’s excise tax take from spirits as a whole to narrowly overtake that from beer for the first time in 2016/7. Beer caught up again last year!

Gin can trace its ancestry back to the early days of distilling in Europe where the prime purpose was to extract essential oils from aromatic plants to help cover up the aromas of daily mediaeval life or else deal with its everyday illnesses. Juniper was a diuretic and particularly prized in times of plague when it was supposed to keep the pestilence at bay. Hogarth’s famous Gin Lane cartoon of 1751 captures the excesses of the mid eighteenth century and gin was more tightly regulated from 1760. That was soon forgotten and duty relaxation from 1825 led to further well documented over indulgence by our Victorian ancestors. Yet fashions change, vodka became more popular as you can mix it with just about anything and gin became associated with maiden aunts. In 1985 Time Magazine called the Martini, the most famous gin cocktail, an ‘amusing antique’! 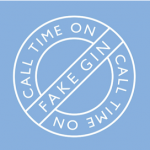 All gin by definition must have a juniper flavour at its heart. The actual level of this active ingredient, unlike the thujone in absinthe, is not defined and open to wide interpretation. Provided juniper is the biggest weight used in the mix, Trading Standards appear to be happy although that is no guarantee the flavour will dominate the finished product. The juniper flavour is supplemented with other peels, barks, seeds, spices, fruits and flowers, all called botanicals. French gin Citadelle boasts nineteen and gets criticised by gurus for lacking direction! More and more brands are seeking to forage local ingredients to emphasise a local connection. There is a campaign “Call time on fake gin” which aims to tighten up the rules as to what constitutes a gin but that is probably not foremost in our Brexit negotiators minds at the moment!

Gin can be complicated; this diagram by Hi Spirits positions some well known brands on a flavour matrix. They factor the orangey ones.  Click to enlarge.

Another driver to increased popularity must be the shelf pull of the package. Arguably Bombay Sapphire kicked this off with the square blue bottle. Today there is a glittering display of retro labels, some screen printed and others very tactile, apothecary bottles and coloured glass galore. Some commentators suggest these may become collectable in themselves.

So gin is booming, expect to see further searching for exotic botanicals, continuing popularity of premium tonic mixers with increasing interest in cocktails with sprigs of herbs and flower garnish floating on the top. Gins may become sweeter and may be blended with other products like rhubarb wine, honey, ginger and even prosecco. Some folk are even drinking it neat, heaven forbid!!

All the above does not answer the underlying question – why gin? Why not rum although that might well be the next big thing? Gin is easy to make and it can be sold immediately without the need to lay down stock for a statutory three years if you had started a whisky distillery. Cash flow can start as soon as your gin is on the shelf. Start up kit is cheap, you can get a beautiful 100L hand beaten copper alembic still for just under £1500 and a tiny 5L one to work up your recipe for £200. Admittedly these need a lot of attention during the distillation process but capital outlay is minimised. Be careful though if you heat the still with a paella burner that all joints are carefully sealed with flour paste and the still room is well ventilated! If you do not want to work long days, you’ll need a still attached to a short column of bubble trays and they do cost a good deal more. As we have seen the loose legal definition of gin allows plenty of scope for experimentation and innovation. 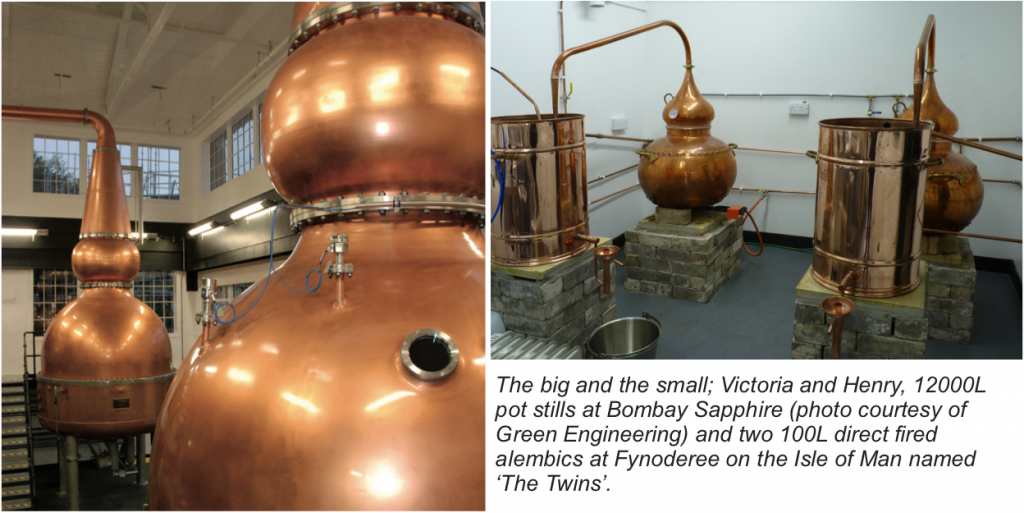 In the days of Facebook and Twitter you can cultivate a loyal following and keep them infused with seasonal versions but you must keep feeding the system as there is nothing less attractive than a website which has not been touched for months. These aficionados are happy to pay premium prices (£35-40 is not unusual) for a product they see as trendy, handmade and local.

There is one final body which deserves a shout out for the proliferation in craft distillation and that is the government! Time was that stills were limited to a minimum size of 1800L from legislation dating back to the regularisation of the Scottish whisky industry in the 1820s. Moonshine was made in much smaller and thus more easily concealed vessels. Hats off to unsung heroes Frances Oates and John Clotworthy at the Drumchork Lodge Hotel at Aultbea in the far north of Scotland. They wanted to make moonshine and invite guests on whisky weekends to do it themselves. Back around 2000, with the help of the late MP Charles Kennedy a loophole was found and two 180L alembics were installed. Subsequent relaxation in the Excise rules allowed hundreds of others to follow. The Excise now use the watchword “as long as the Queen’s revenue is not compromised” when approaching an application for a distilling licence. Sipsmith was the first new licence issued in London for 189 years when it started off in a Hammersmith garage only in 2009. Now it has been taken over by one of the big boys – Suntory from Japan. Parallels with the craft beer industry are very close.

We’ll tell you more about the peels, barks, seeds, spices, fruits, flowers and other exotica as well as how to make gin in next month’s blog.