The Current Market and Future Trends of Cider

Cider is a popular drinks category and UK off-trade value sales growth of 5.2% over the past year backs this up. Some 47.8% of all households now regularly buy cider – up from 45.5% last year. Apparently your average UK household takes home 33 litres each year. Good weather and key sporting fixtures helped to drive this increase but happily many producers reported strong sales throughout the year, indicating that cider is no longer dependent on sunshine to get the tills ringing. Pear cider aka perry (although few use the term nowadays) is now below 7% of the sector and some of the value ciders and the fiercesome white category are also in decline. 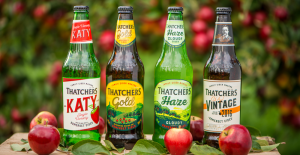 Apple cider continues to account for the majority of sales (57%) and it is still in growth. Producers in this segment are experimenting with different apple varieties, single variety ciders, rosé cider, different packaging formats and promoting its gluten free credentials. Strongbow Cloudy and Thatchers Haze have that unfiltered look of olde worlde scrumpy. 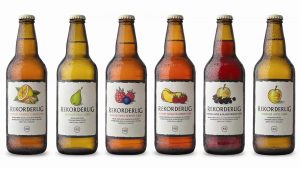 The range of fruit ciders from Rekorderlig in Sweden, Molson Coors have the UK distributions rights

The new kid on the block (since 2009) is fruit cider which has reached 36% of the market, with a rise of 12% last year and predicted to become the major component by 2022. Fruit cider was first introduced by Sweden’s Kopparberg, this is particularly popular with female and younger drinkers and introduces folk to the cider sector north of Manchester where the apple has never sold very well.

Putting all this together the top brands in 2019 are… 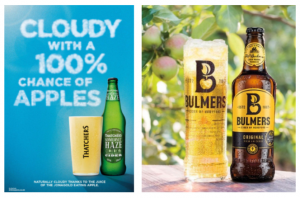 According to Westons, which produced its annual Cider Report in March, Strongbow Dark Fruit may even overtake its apple cider parent brand to become the top-selling cider over the next 12 months 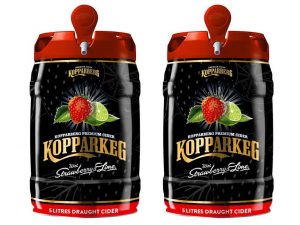 Another rapidly growing packaging format is the five-litre keg, first introduced by Kopparberg. Another growth area is no and low alcohol cider, with Kopparberg again leading with all its core flavours in no alcohol versions. Let’s hope that fruit cider avoids the challenges of the erstwhile RTDs aka alcopops which collapsed under the weight of far too many variants, I believe there were ten different Bacardi Breezers at one stage which led to much customer confusion and little brand loyalty. Most cider combos are dark with only Heineken’s Old Mout Kiwi & Lime breaking the mould while Rekorderlig Botanicals has drawn on the current gin trend, combining floral, fruity notes.

The big brewers have all climbed on board getting their own brand ciders contract produced although I am told that packaging cider on a beer line does wonders for keeping the level of beer stone down! A-B InBev has Stella Artois Cidre, Carlsberg has Somersby, there is Carling British Cider and Molson Coors bought Suffolk’s Aspalls. 2018 also saw the sale of Aston Manor to French cider maker Agrial, C&C (Magners) has extended its’ distribution and brewing partnership with A-B Inbev leaving only Thatchers and Westons as the two largest family owned cider makers. 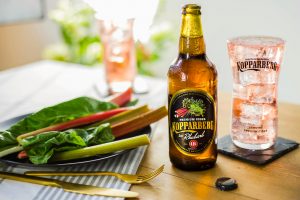 Flavour innovation continues with Rekorderlig Botanicals Rhubarb Lemon and Mint as well as Peach and Basil; Kopparberg’s Blueberry and Lime and Kopparberg Black which uses blackcurrants and blackberries to darken it up considerably. Brothers which now owns Showerings Cider Mill in Somerset has Strawberries and Cream and Parma Violet flavours alongside its Rhubarb and Custard offering.

As in the brewing industry, sustainability is to the fore with producers reducing energy and water usage, removing plastic from packaging with the added ability to plant orchards to absorb CO2. Aston Manor planted another 1000 acres last year. 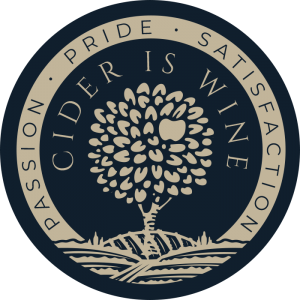 A trade organisation called ‘Cider is Wine’ is on a mission to spread the gospel of cider and perry made with 100% juice content across the UK. The group is the brainchild of Alistair Morrell and Roddy Kane, who argue that high-quality cider should be treated like wine due to the similarities in the production process. Member brands are not exactly household names…yet They include Abel, Brännland, Eden, Gospel Green, Kystin, Loic Raison, Once Upon A Tree, Tutts Clump and Willie Smith’s all the way from Tasmania. There is a generic logo that can be stuck to bottles to indicate that the cider has 100% juice content and has not been made from concentrate. These are wines – they just come from apples, not grapes” say the organisers. 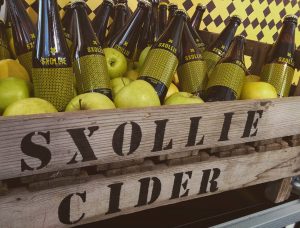 The International Cider Challenge reports that New World entries now outstrip those in the classic West Country style. New World ciders do not bear much resemblance to the traditional ciders from the west of England. They are generally made from dessert fruit which makes them lighter and more acid driven, with little tannin astringency. For the first time, the Supreme Champion was awarded to a cider made outside Europe, to South African producer Sxollie for its Cripp’s Pink cider made from this single apple variety. Of the seven trophy winners at ICC only Sheppys was from the UK. 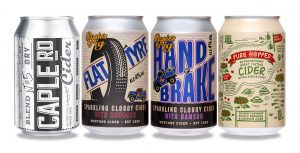 Smart cans from Weston’s in Herefordshire

Some cider makers grumble that although cider gets lumped in with the beer market that the duty structure has not kept up with beer. There is no progressive cider duty beyond the small producer’s 70hL. Unlike beer, cider has a flat duty rate within wide %ABV bands. Up to 6.9%ABV it is £40.38 per hectolitre. Beer at 5.5% attracts £104.94 so perhaps they should not be too vocal! A further anomaly involves the popular fruit ciders, because the cider regulations preclude the use of added fruit or syrups, these products fall under the ‘made wines’ duty structure where rates are a lot higher (up to 5.5% is £122.30 per hL). They are still called ciders but the cider regulations cannot apply including the 35% apple content. The sugar content of some of the fruited products is also under threat as the soft drinks ‘sugar tax’ takes hold.

The shop at Thatcher’s cidery and Healey’s Cornish Rattler mobile bar, a common sight in Cornwall during the summer

Dominated at one end by the large players with lots of smaller artisanal producers at the other, the middle ground remains somewhat underpopulated. There is surely an opportunity for innovative and forward thinking producers, as we’ve seen in the craft beer sector?