The Story of Cider

Cider is one of the easiest alcoholic beverages to make. It is only slightly more difficult than winemaking as the hard apple gives up its juice a lot less easily. So you simply press the milled fruit to get juice and rely on yeast on the surface to do the fermentation. Simples, well obviously there is a lot more technology involved today.

Global cider production is around 27mhL and the UK market at 8.22 million hectolitres is the world leader still representing 39% but dropping as the rest of the world catches up without any of the preconceptions about the traditional products of England’s West Country. There are some 500 UK producers according to the National Association of Cider Makers. Traditionally the market was in the south west and West Midlands with pockets of popularity in East Anglia. Europe adds 24% with Spain, France, Germany, Ireland, Poland and Finland to the fore with the Czech Republic, Romania, Bulgaria, Greece and Russia developing strongly. Africa follows with 13% but is up-and-coming as is North America where cider apple orchards failed to survive Prohibition and Australasia at 8%.

At home, some 36% is sold in the pub and the rest from supermarkets etc. In the off trade, the can is the predominant package at 53% glass follows with 32% and quite a significant portion is in PET for larger sizes at the budget end of the market.

Cider is trying to get over a rather downmarket image. Being a West Country lad, your blogger can remember the cider drinkers turning up for work at George’s Bristol Brewery. They had huge hands and noses whose colours would not look out of place on an AA road map. Rough cider was 10 pence a pint at 6 or 7% alcohol while Courage Bitter at 3.5% ABV was one and thrupence! Such products made disposable income go considerably further but with somewhat unpleasant after effects. It was always interesting to bring a poly pin of scrumpy cider back from trips home and I’m pleased to say that the Chief Engineer at Bass’ Tadcaster Brewery swore that it cured his rheumatism and where could he get some more! Cider was also happily doled out to keep children happy with few parents realising how strong it actually was. 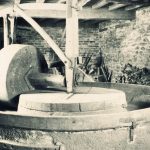 The traditional cider mill would involve a single horsepower device crushing the fruit between revolving stones. The resulting pulp would be shoveled into the centre of a hessian cloth which would be folded over and a board placed on top. A series of these units would make up a ‘cheese’ which would be manually pressed to extract the juice. In a good year the resulting juice would be about 1055o gravity which would ferment to produce a dry cider at around 7.5% ABV. Maturation would take place in oak casks where a secondary malo-lactic fermentation would ensure take place lowering the acidity further and giving additional roundness to the flavour. 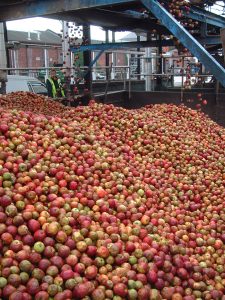 Cider makers delight in handing visitors a cider apple to eat. Big and red, it looks appetising enough and the first bite is fine – sweet and juicy. You notice it is a bit chewy, then the tannin astringency kicks it and you have to spit it out!

Cider apples make up about half of all apples grown in the UK, most of which, due to their acidity and tannin content, are not suitable for eating. There are four types of cider apples used in cider making – bitter sweets with low acidity <0.45% (4.5g/L) and high tannin (>0.2%) represented by Brown Snout, Yarlington Mill, and Dabinett; bitter sharps have both high acidity (>0.45%) and tannin (>0.2%) represented by Porters Perfection, Foxwhelp and Kingstone Black; sweets including Ashmeads Kernel and Cox’s Orange Pippin are low in acidity <0.45% and tannins <0.2%. while sharps (Browns Apple, Bramley’s Seedling and Katy) are higher in acid >0.45% and low in tannin <0.2%. Tannin delivers the dry ‘black tea’ flavour note in cider and helps create the amber colour, while acidity delivers the refreshing sharp notes in cider. The art of cider making balances the acidity, tannin and sweetness to achieve a well-rounded cider. 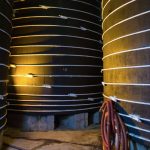 The horse has probably been pensioned off but there are several hundred small farmer producers using time-honoured techniques and selling cider from the roadside for since 1977 there is no duty payment for output below 70 hectolitres. Many local pubs in rural cider drinking areas will have poly pins on the back bar to cater for traditional customers.

More microbiological control is available by using dried yeast to make sure the fermentation gets off to a good start rather than relying on what nature leaves on the apple skins. As with brewers, many ancient bits of equipment has been swabbed to find novel yeasts and Sandford Orchards in Devon adds apple leaves to pressed juice and has been surprised by the extra zing which other adventitious yeast cells bring to the party. 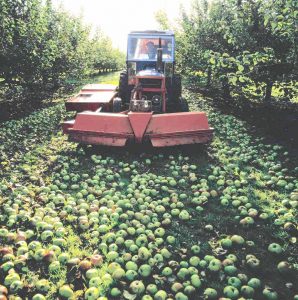 The apple harvest takes place over three to four months in the autumn and much of the crop is pressed and evaporated to produce a concentrate with a long shelf life. Today’s presses are made by Bucher in Switzerland where apple pulp is fed into a large cylinder fitted with a piston arrangement to reduce the volume. A matrix of flexible perforated tubes wrapped in polypropylene sleeves collects the juice. The press is filled and compressed to force the juice into the tubes. The pressure is relaxed to allow more pulp to be added and some 85% of the potential extract can be recovered. The waste pomace goes for animal feeding or else anaerobic digestion to generate methane and electricity. Triple effect evaporators concentrate the juice to 70o Brix for storage and transportation.

There is no need to dilute the concentrate to the traditional fifty odd degrees of gravity and many larger producers will ferment a higher gravity liquid with a champagne yeast and perhaps make a cider at 15% ABV. As long as the apple content is above 35% it is possible to add other fermentable material to make a cheaper product in a process called chaptalisation after French chemist Jean Antoine Claude Chaptal who first advocated the practice. Since September 2010, HM Revenue and Customs has decreed that, to be called cider, a drink must contain at least 35% juice and must have a pre-fermentation gravity of at least 1033o.

A wine consumer would probably be horrified if he thought his wine was only 35% grape sugar! The 35% rule was only introduced following big growth in so-called white ciders where either a small amount of concentrate or even apple pomace from the primary pressing was extended with glucose to produce a very cheap slightly appley product. Any remaining colour could be removed using activated charcoal.

Perhaps Irish cider maker Magners’ £30 million marketing campaign in summer of 2006 was a turning point centred around the unisex and social nature of its cider and most crucially that it was drunk over ice. The entire market was invigorated by the Magners effect. Cider makers started to blend in culinary fruit to make the product more sessionable, sweeter and perhaps a good deal less challenging. New city based cideries have even sprung up giving rise to urban cider and apple orphanages. Hawkes in London now part of BrewDog will collect unwanted apples and for every 3 kg donated a bottle of Urban Orchard cider is returned.

Next month we shall consider the current market and trends for the future.