Scotch malt whisky has, by law, to be made in a pot still. These are made of copper and it is arguable that copper is as significant a raw material in the process as are malt and yeast. Copper will complex various sulphur compounds which you would not want in your whisky although the reactions are too complicated to detail here. So the stills and condensers are designed to maximise the contact time between vapour/spirit and the metal. Although the heating element design is key as is the volume to surface ratio within the body of the still, it is what happens above the level of the boiling liquid which makes the difference. This is the reflux where vapour condenses and flows back down to be reboiled. Reflux can be encouraged by height, bulges or even spherical sections in the neck of the still. The angle of the pipe (called the lyne arm) going to the condensers is also important, some can slope upwards, level or downwards and will increase or hold back the flow of vapour. Some stills have a water cooled section at the top called a dephlegmator to hold the vapour above the still for longer. 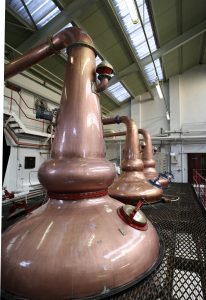 The stills at Glengoyne

Spirit was once cooled by passing copper tubes through a bath of cold water called a worm tub. Contact time was quite low so the spirit was deemed to be heavier or more meaty in character, modern shell and tube devices increase copper surface contact time so will produce a lighter spirit. Lighter spirit might mature in cask more rapidly. Even the time when no distilling is taking place is important. Oxidation of the surface will occur which seems to free up copper so the spirit can change character until the conditions settle down again so distillers find it best to keep going. Distilling on Christmas Day is probably for this reason rather than any worry that stocks will be dangerously low in ten years time if production is held up. Distilleries do have a period for maintenance called the silent season. This is two or three weeks in the summer when traditionally the water supply would dry up, yes, even in Scotland! 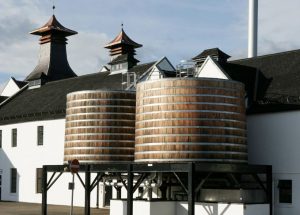 Copper may be easy to work though labour intensive, it conducts heat extremely well but stainless steel is a lot cheaper and lasts longer which is a major driver these days. Green Engineering in Italy has developed nano copper particles which are far more reactive than a solid copper surface. These can be incorporated into a stainless still for the best of both worlds.

A still will eventually get too thin to work safely, so a replacement will be ordered with exactly the same dimensions and even dents as before. A brewer does wonder whether this is absolutely essential and whether more care with water ionic content, wash clarity, yeast health and selection, constant fermentation conditions etc may have more effect by ensuring the wash is more suitable for the type of spirit you want to make. Perhaps one of you distillers out there can put my right! 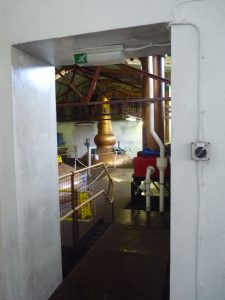 There will be two stills, a wash still which will concentrate the wash to around 25%ABV as ‘low wines’. There are no cuts just a straight concentration. At the Isle of Arran Distillery the wash still is 7,100L and the second spirit still is 4,300L. Cotswold has 2,500 and 1,500L, Glengoyne boasting the slowest distillation in Scotland has 12,500 and  5000L, Isle of Jura says it has the nation’s tallest at 7.5m and 24,500 and 15,500L although Glenmorangie disputes this figure – it all depends on where you measure from I suppose! Talisker has two 10,000L wash stills and three 7,500L spirit stills while probably Scotland’s biggest malt distillery Glenfiddich has ten 10,000 and 20×5,000 for spirit but it may have been surpassed by the new Macallan plant with 12×13,000 and 24 x 3,900L. So there are many variations in size and number. 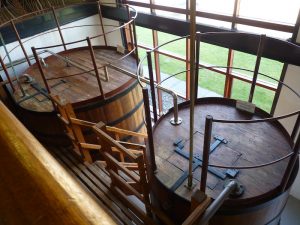 Next stop is the smaller spirit still. The low wines are mixed with the foreshots and tails from previous runs. Alcohol boils at 78oC so the distiller waits for the foreshots, these will contain unwanted lower molecular compounds and will also rinse the last runnings from the previous batch. Foreshots will be collected for five to 20 minutes depending on the regime dictated by the Head Distiller. Strict excise rules mean that no spirituous residues can be dumped so what goes back comes to the still again next time. Although I have seen no figures, very low levels of things like methanol in the wash must get concentrated so the first cut point is very important. Once the foreshots are off, flow is diverted to collect the main body of the spirit.

Once the alcohol is off, the temperature starts to rise and the alcohol content drops off. Collection will continue but to avoid unwanted higher molecular weight compounds the second cut will take place once the %ABV drops to around 70% perhaps even lower. The tails are collected until the cost of the steam outweighs the value of the spirit collected.

Batches will be held until there is a convenient quantity to fill into casks. Often this will be once a week in smaller distilleries. The strength will be reduced to 64% for maturation.

The residual pot ale from the wash still and ‘spent lees’ from the spirit still need to be disposed of. Spreading on land locally can be hazardous due to the high copper content. Where there are a number of distilleries together as at Rothes on Speyside, central plants can process the liquid residues and blend the syrup with the spent grain (draff in Scotland) from the mash tun to make a valuable cattle feedstuff. 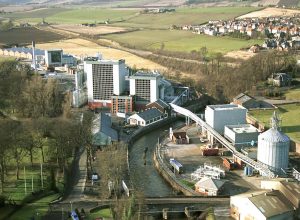 The monster Cameronbridge grain plant in Fife owned by Diageo

We have a bit of space left to let grain whisky catch up. There are seven plants in Scotland (Cameronbridge, Girvan, North British, Invergordon, Strathclyde, Starlaw and Loch Lomond). To give you some idea of scale, the seven grain distilleries in Scotland produce more than all the malt distilleries put together by a massive 100mLa (million litres of pure alcohol) margin. 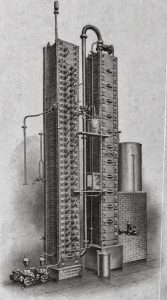 A Coffey continuous still. Edinburgh’s North British grain distillery has four of these each working at 50,000L of wash an hour

The main substrate is soft wheat. It used to be maize from North America but EU tariffs made it more expensive and there was no guarantee that the crop had not been genetically modified. The starch in the wheat is converted using high protein malts (10% of the charge) with loads of enzymes. No exogenous enzymes can be used in making grain whisky. Before adding the malt, the wheat needs to be cooked to untangle the starch molecules so that the enzymes can get to work. This is done in a semi continuous process at high temperature (160oC) and pressure, the slurry is cooled back to 70oC before the milled malt is added. Alternatively the wheat can be hammer milled to disrupt the internal structure and mixed with water at high pressure but only 70oC before adding the malt. The wash can be around 1080o gravity into the wash back and it will ferment to 12%ABV. Stills are designed to cope with solids from the grain and yeast residues but some distillers have installed decanter centrifuges.

Apart from automation, the continuous still has not changed much since Aeneas Coffey patented one in 1830. It uses trays which are essentially mini pot stills. Vapour rises to the tray above and condensed liquid goes over a weir and back to the tray below. To cope with low ceilings a still is split into two parts called the analyser and the rectifier and contains some 70 trays in total. The wash enters at the top of the rectifier where it is heated up within a curly pipe before being released into the top of the analyser. Steam enters at the bottom and vapour is stripped out by the rising steam. It enters the bottom of the rectifier and gradually rises to a spirit plate near the top and spirit of over 95%ABV is collected. Condensed higher molecular weight feints can be collected from lower plates and perhaps sold to nail varnish companies. Balancing the steam and wash inputs allow the still to operate continuously in a steady state.

Both grain and malt whisky will be held in cask for three years before it can be processed further and that will be the subject of the next blog. Wood is every bit as important to whisky making as are copper, barley, yeast and still design. 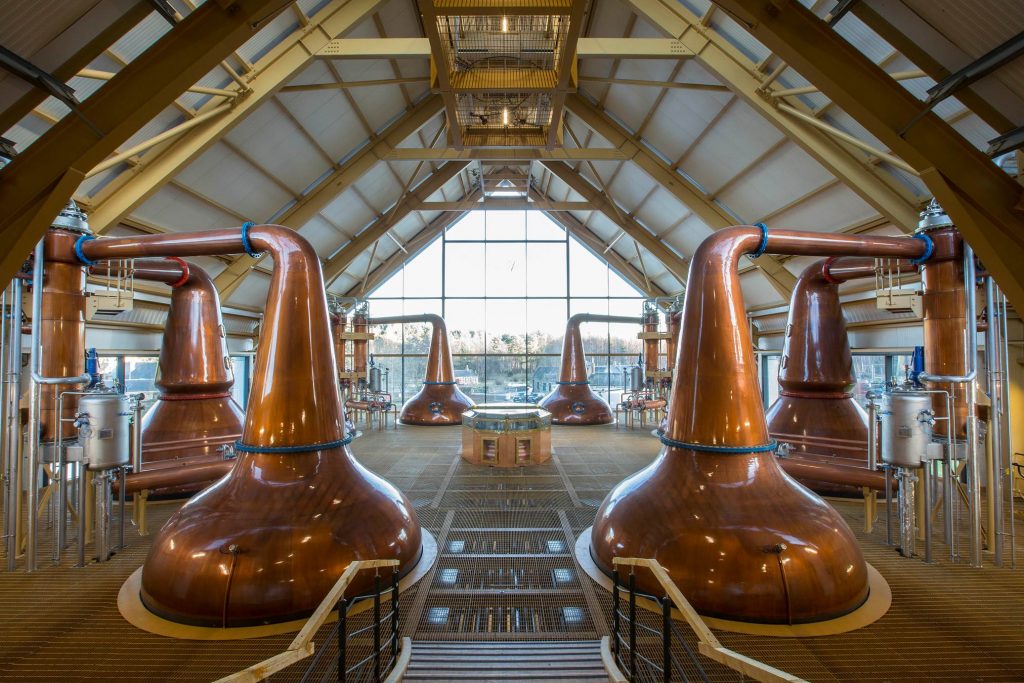