Who Owns What In The UK Brewing Scene?

With the well publicised takeover of Fuller’s brewing operation by Japan’s Asahi in January 2019, we thought it was time we looked at how the structure of the UK brewing industry has changed since those heady days back in 1980 when beer sales were at an all time high of 67mhL. 88% of beer was drunk in the pub; today, despite a good summer and the World Cup last year, the market is worth 45mhL and just under half of the beer is sold in pubs and clubs. Six large vertically integrated brewing companies have given way to pubcos and four international wholesalers. Only Heineken still owns any pubs. 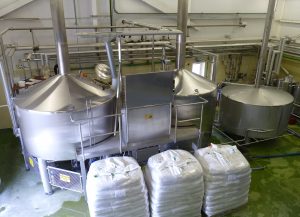 Beers sales declined from 1980 and pub owning brewers started to realise that there were more returns from retailing and property than producing the amber nectar so formed dedicated divisions to look after the outlets. Household names for centuries, these brewers dominated the marketplace; Bass, Allied (Ind Coope, Ansells and Tetleys), Courage, Watneys, Whitbread and Scottish (Youngers and McEwans) & Newcastle. Things came to a head in 1989 when Lord Young during Mrs Thatcher’s administration was ‘minded’ to accept that brewing was a complex monopoly not necessarily in the public interest. The Beer Orders forced the big brewers to sell off half of the pubs they owned in excess of 2000. Bass originally with 7700 would have to come down to 4850. With so many often lower end pubs on the market, sales directors fearing for their jobs helped form pubcos with high levels of corporate debt but tremendous buying power. A provision for a guest beer in the big brewers houses did not bring a lot of variety as supply deals were done with the larger regionals.

Seeing the writing on the wall, the Big Six started to abandon brewing. Bass went into hotels and floated Six Continents which eventually became the International Hotel Group (Holiday Inns etc) and pubco Mitchells and Butlers. In 1999 its brewing interests were sold to Belgium’s Interbrew which had just bought Whitbread’s breweries. The government forced Interbrew to shed the English rump of Bass which was purchased by Coors from Colorado. The Tennent’s plant in Glasgow passed to C&C from Ireland which is better known for its Magners cider. Interbrew became the world’s number one brewer as Anheuser Busch InBev. It recently took over No2 SABMiller which only had a UK brewing interest in London’s Meantime and that was sold on to Asahi as part of the settlement. 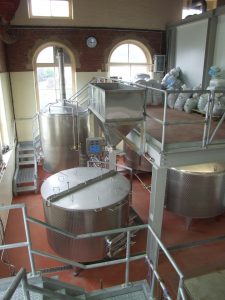 The brew vessels at Saltaire

Whitbread took over Boddingtons in 1989 but morphed into a restaurateur and hotelier (Premier Inns), only finally disposing of its Costa Coffee operation to Coca Cola in January 2019. Watneys had been a division of conglomerate Grand Metropolitan since 1971; it ended up with Courage’s pubs and Courage got Watney’s breweries in 1991. Grand Metropolitan sold its pubs to Japan’s Nomura and merged with IDV to form Diageo. Courage had been stalked by the Australians of Elders IXL in 1986 and eventually merged with S&N in 1995. Carlsberg wanted S&N’s Baltika interests in Russia and got into bed with Heineken to carve up the whole company with Heineken getting the UK breweries and the Bulmers cider operation. Allied sold its breweries to Carlsberg forming Carlsberg Tetley in 1993. Meanwhile Guinness ceased production at Park Royal in London and all UK black stuff comes from Ireland thus ending decades of arguments about whether Guinness was better in Bristol and Liverpool as it came from Dublin; now it all does! Large regional Greenall Whitley closed its brewing operations in Warrington, Davenports in Birmingham and Shipstones in Nottingham in 1990. Mega breweries of the late 60s and 70s at Luton (Whitbread), Runcorn (Bass) and Berkshire (Courage) built to make vast volumes of nationally advertised brands came and went. The big six had 39 breweries before the Beer Orders; only eight are still operating.

So in 2019 80% of Britain’s beer comes from four foreign owned brewers. A-BI has plants in Magor and Samlesbury; Carlsberg is at Northampton. Molson Coors is at Burton on Trent and Tadcaster while Heineken brews at the Royal in Manchester and John Smiths in Tadcaster with hands-off ownership of Caledonian in Edinburgh.

Larger regionals have also exited brewing; Charles Wells, Youngs, Thwaites and now Fullers. Thwaites has built a mini brewery to do niche brands outside Blackburn and Wells is currently seeking planning permission to build one on the same aquifer nearby in Bedford.

Greene King now has 2900 pubs and brews at Bury St Edmunds and at Belhaven in Scotland but was acquired by HongKong billionaire Victor Li through his CK Asset Holdings group.

Marstons of Burton on Trent and Wolverhampton has around 1500 pubs and has mopped up the Thwaites brands, the Wells plant in Bedford (now called the Eagle Brewery), Jennings at Cockermouth, Wychwood in Oxfordshire and Ringwood in Hampshire. All these plants were still brewing in 2020 when the company announced a JV with Carlsberg to form the Carlsberg Marston’s Brewing Co which pooled UK brewing and distribution assets.

Other sizable operations on account of contract brewing, supermarket supply deals and the number of pubs they still own are Camerons at Hartlepool, Samuel Smith at Tadcaster, Robinsons at Stockport, Shepherd Neame at Faversham and Hall & Woodhouse at Blandford Forum.

Open fermentation vessels at Hogs Back in Surrey and shiny stainless at Moorhouses in Burnley.

The rest of the long established regionals are tiny in comparison but happily are still brewing. 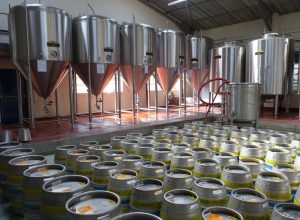 Casks and fermenting vessels at Windsor and Eton Brewery.

What about the micro brewers I hear you cry. There are 47 breweries mentioned above yet CAMRA estimates there are perhaps 2500 in the whole country. Most are very small and face a very competitive market place as many pubs are tied in some way to a fixed beer supplier. The growth of micro pubs has given a bit of help but their status as low cost operations must be under consideration in many of Britain’s town halls. The Society of Independent Brewers (SIBA) looks after 831 smaller brewers producing some 2.87mhL (69% in cask) and happily 470 of those have engaged in an audit scheme to improve procedures which impact quality over the bar. Elsewhere beer quality remains somewhat patchy. 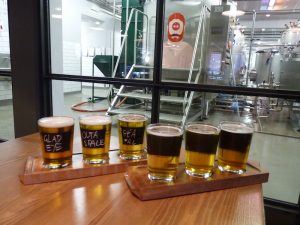 A view of the brewplant from the bar at Drygate in Glasgow.

Unlike in the States, output figures are not published over here so it is hard to give a definitive list of the up and coming players. A 50hL plant is not necessarily used five days a week but the following are doing well; Acorn, Abbeydale, Big Lamp, Copper Dragon, Dartmoor, Evan Evans, Fyne, Harviestoun, Hogs Back, Ilkley, Joules, Kirkstall, Lancaster, Moorhouses, Moor Beer, Oakham, Ossett, Purity, Rhymney, Roosters, St Peters, Stewart, Thornbridge, Titanic, Triple fff, West, Wickwar, Williams Bros, Windsor and Eton and Woodfordes. The huge success story is BrewDog with three breweries worldwide, a fourth is planned in China and a string of over 60 bars (20 of them overseas). Only founded in 2007, it produced over 500,000hL of beer last year and another 100,000hL of wash for its LoneWolf Distillery.

You might get to hear about making whisky next month! 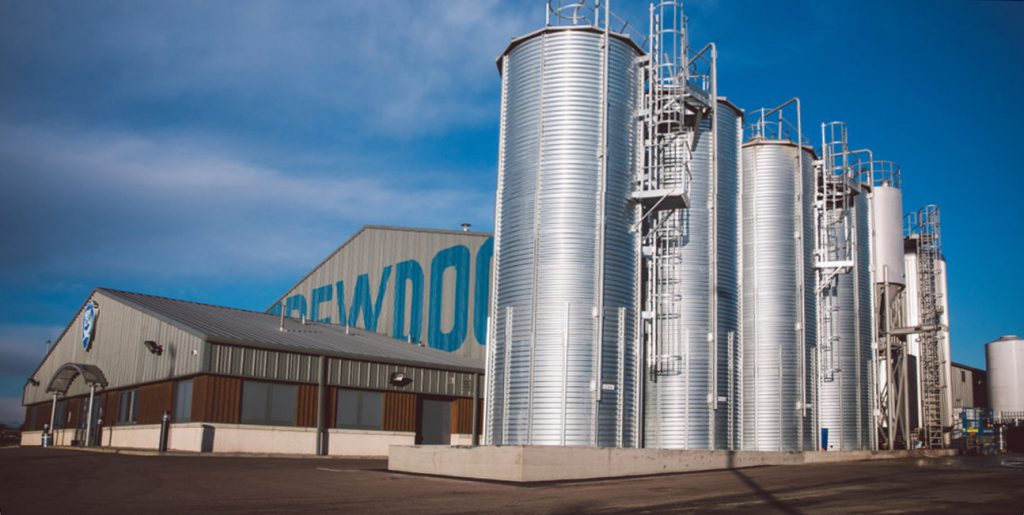 The DogTap bar on the left and malt silos at BrewDog’s brewery north of Aberdeen.